Veterans Memorial Park, home to 20 war memorials and the Rear Admiral Leroy Collins Jr. Veterans Museum, is the subject of a University of South Florida master plan survey that seeks community input through May 24.
Conducted on behalf of county interests, the survey is online at the Hillsborough County Engagement and Education Hub as a key means to developing a vision for the future of Veterans Memorial Park, which serves also as a venue for regional ceremonies on Veterans Day, Memorial Day, Patriot Day, along with a variety of other events.
At the park, established oaks trees provide a shaded and tranquil setting for reading, reflection, mediation, picnicking, walking, jogging and group and family gatherings. Paths include a fitness trail along the Tampa Bypass Canal.
As of noon May 16, more than 340 comments had been posted, with roughly half of the more than 110 respondents answering the question reporting themselves as veterans. Two-thirds of respondents said they had visited the park, and those who hadn’t gave a variety of reasons, including that they were not aware of the park or had stayed away during pandemic-related closings.
“I truly enjoy the park as it is currently, a quiet, peaceful place allowing reflection and thought, although the museum needs to be reopened,” wrote one respondent. 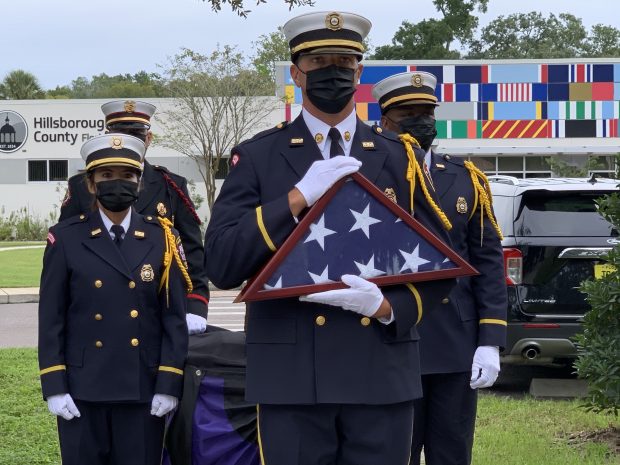 Another respondent offered that upon visiting, “I have never seen as many people as I thought could be there,” as the “park is beautiful and the monuments are wonderful and informative.”
Located south of Dr. Martin Luther King Jr. Boulevard at 3602 U.S. Highway 301 in north Tampa, the park incorporates land owned by Southwest Florida Water Management District (SWFWMD) adjacent to the Tampa Bypass Canal, with land acquired by Hillsborough County in 2015 to acquire a nearly 14-acre regional park.
Featured at the park is the Vietnam Veterans Memorial, including a UH-1 “Huey” helicopter; the Iraq War Memorial, including a bronze “Battle Cross,” situated atop a central pedestal depicting the names of all 190 fallen heroes from Florida; the Korean Veterans Memorial, including a boulder brought back from Incheon Beach, South Korea; and the Spanish American War Memorial, including 16 black granite plaques that provide a history lesson of the 1898 war.
Also at the park are the Committed Forces Memorial, commemorating the men and women who have served in military conflicts, police actions and global skirmishes during peacetime, and the Fallen Heroes Memorial and Field of Honor, which, behind the engraved names of the fallen, includes the words, “Freedom is Not Free.” 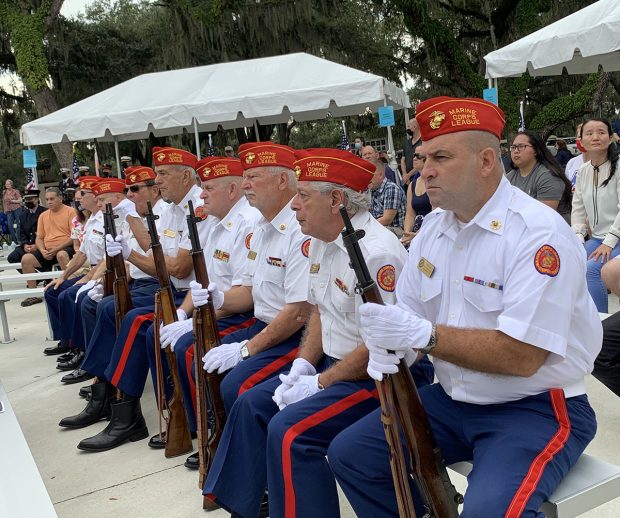 Photo by Linda Chion Kenney
In formation at the 2021 Patriot Day Remembrance Ceremony at Hillsborough County Veterans Memorial Park, this ceremony marked the 20-year anniversary of the 9/11 terrorist attacks.

Rounding out the 20 memorials are those for World War I, World War II, the Gulf War, the Mexican-American War, the Seminole War, the Civil War and the war in Afghanistan, as well as the Purple Heart, Medal of Honor, submariners, armory, American Eagle, Veterans Freedom and POW/MIA memorials.
Survey respondents said they use the park for bicycling, walking, fishing, picnics, exercise, relaxation, lunch breaks and “the quietness to read,” moreover, as a place to, as one respondent put it, “look at the monuments and remember the fallen.”
Events attended at the park “are always well done and evoke a sense of pride and a bit of sadness,” wrote one respondent. “My father was a World War II D-Day veteran who was involved with the local DAV and Military Order of the Purple Heart, and they supported and hosted local commemorative events.”
Respondents who answered the question about what they liked most about the park, noted such things as the shady trees, open space, well-maintained grounds, free park admission and “the diversity, dignity and solemnity of the memorials throughout the park.”
Noted as park negatives were such things as limited roadside visibility, trash left behind, pandemic-related closings of some facilities, lack of signage and poorly maintained neighboring property. Suggested for improvements were better signage, advertising, maintenance and entranceway visibility.
Suggested community-wide events ranged the gamut from family and senior events, school tours and organization meetings to “art, ship and plane displays and tree planting/sales.” Also noted, kayaking and canoeing, sponsored walks, a flea market, concerts and guided tours.
As expected, survey responses represented diverse views and perspectives, and, for the most part, were complementary and offered support of promoting the park for the uninformed.
“Sometimes, getting out of the park is scary, especially trying to make a left turn,” wrote one respondent, adding that the park is “difficult to see from the road” and needs more promotion and better marketing. “There’s a surprising number of people who have no idea there is a [Hillsborough County] Veterans Park.”
For information about the park, educational tours; the on-site Veterans Resource Center and volunteer opportunities, including for park beautification projects; patriotic events assistance; and to serve as museum docents and educational tour guides, visit HCFLGov.net and search for “Veterans Memorial Park and Museum.”
To read and take the survey, visit www.publicinput.com/hub/51 and search for “Veterans Memorial Park Master Plan Survey.”