The Lennard Longhorns got whipped by Sickles last week, 11-0, in opening-round regional baseball play. The run-rule massacre by the Gryphons put a definite conclusion to Coach Victor Martinez’ Horns’ diamond season as Lennard wound up getting shutout and drubbed in its only two games of the “second season.” Earlier this month, the Longhorns took it on the chin 8-0 at the hands and bats of Bloomingdale in district.
Despite the pair of campaign-ending losses, the 17-6 Longhorns improved their record from 9-13 last year, Martinez’ rookie year as head coach. Now, the Horns can remember a winning season and look forward to next year. Two hard-hitting seniors, John Smith and Keith McClain, graduate at Lennard, but a trio of pitchers and a bevy of other underclass starters are expected to return. Smith registered a team-leading .397 batting average and swiped 15 bases. The swifty Smith was also a key reliever on the mound for Coach Martinez. McClain put up a consistent .373 at the plate. Hurlers expected to return are juniors Jackson Mueller and Carter Payne, along with sophomore Zack Bird. Also expected to return is infielder Alex Brazer. The junior hit .344 and drilled four home runs this season. Coming back for his junior year is Matthew Counts, a .348 season hitter and a spot reliever.
The other four South Shore high schools have completed their 2022 seasons as well.
Sumner was eliminated last week in regional play after winning three straight in the district playoffs. The Stingrays completed a 2022 season at 9-13 in their second year under Coach Kennedy Duran.
East Bay at 9-13, the Riverview Sharks at 7-16 and the Spoto Spartans at 3-17 also ended their baseball seasons by losing first round district games earlier this month.

East Bay Indians in do or die game May 17
Four other South Shore softball teams
eliminated in second season
The East Bay Lady Indians are depending on the strong pitching of sophomore Elana Roush to continue their run through the regional softball playoffs. The 15-12 Lady Indians faced off with the Northeast High Vikings May 17 in a win or end-the-season game. The winner clashes May 20 with the winner of Seminole High versus Osceola High for the regional championship. Winner of that game goes on to the 5A State Championship semi-finals May 26. The state championship final game is May 27.
The other four softball teams in the South Shore lost in the “second season” earlier this month, ending their 2022 seasons. Sumner, under Coach Autum Hernandez, lost 3-2 to Northeast last week in regionals to conclude the Stingray girls year at 15-9. Riverview was pasted by Newsome to end with a 10-8 record. Lennard and Spoto also lost, falling to 14-4 and 8-12, respectively, to end their seasons. 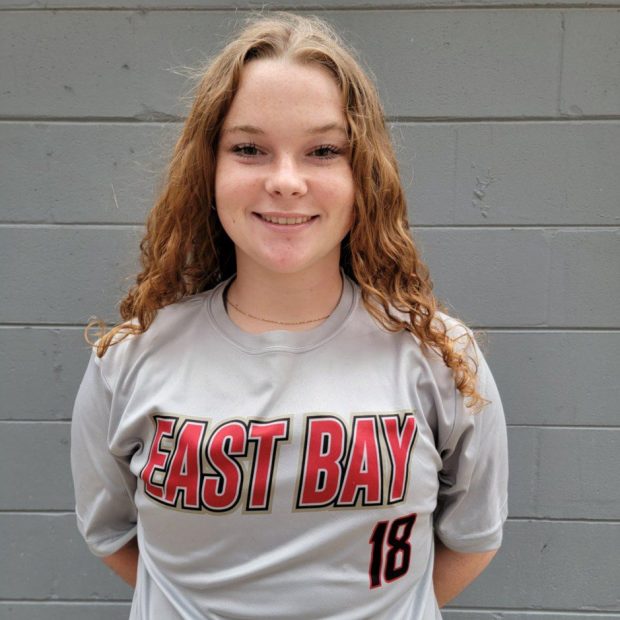 East Bay, behind Roush’s complete game, three-hit shutout and 12 strikeouts, ripped 8-18 Braden River in opening regional play last week. The Lady Indians topped Sumner May 5 to claim the district champ status and to advance to meet Northeast early this week in regionals. Pitcher Roush has won 13 games for 2022 for Head Coach Glenn Rodriquez. As a team, East Bay is hitting .280 for the season with nine home runs. The 5’ 3” Roush is not only a winning hurler, she is leading the Lady Indians in batting with a .338 average and 13 RBIs, as well as a 1.75 earned run average on the mound. Soph Aisha Duncan is batting .310, and senior Gabby Miller has compiled a season batting average of .300 with the team’s top RBIs of 16. Frosh Jensen Nelsen has hit a team-leading pair of homers along with a season average of .300. Freshman Molly Johnson is also hitting .291. Ari DuPont, a junior, has stolen 15 bases and batted .280. Frosh Kaylee Haas and senior Joie Astacio collected a pair of RBIs in last week’s regional opener victory. Coach Rodriquez will be looking to this nucleus to keep East Bay’s four-game winning streak alive and to keep the Lady Indians alive in the regionals for a May 20 game. The veteran Rodriquez is having his best season since 2018. Going in to the early week game with Northeast, the Lady Indians had won four games in a row.
Northeast High of St. Petersburg planned to use senior pitcher Angelique Ballow, a dynamic hurler herself, in the early week regional game at East Bay on Tuesday.