Major Dennis Fogarty is the new Hillsborough County Sheriff’s Office District IV commander.
The longtime veteran joined law enforcement in January 1997, after graduating with a Bachelor of Arts Degree in Criminology from the University of South Florida the month before. He immediately entered the Police Academy and has been with the Hillsborough County Sheriff’s Office ever since.
“Back then I paid my own way through the academy, when there were more applicants than jobs,” he said. “Now it’s the other way around, and the department covers the cost.”
Fogarty, 53, is happy to lead the 155 employees currently working in District IV.
“My motto is tell them what I want, why I want it and trust them to figure out how to do it,” he said.
He’s also delighted to serve the residents of South Shore.
“I love it down here,” he said. “I like how much this community appreciates law enforcement.”
The major said his immediate focus will be on overnight vehicle theft in southern Hillsborough’s tight, new neighborhoods, fraud/scams and the area’s increasing problems with traffic.
“Every street has issues,” he said, urging everyone’s patience. “We always get to it but not always right away.”
Fogarty said he also plans to add another community resource deputy. He’s looking to add more patrol deputies and crossing guards, as well.
If you’re looking for a new career, visit https://teamhcso.com/Careers or call the District IV office at 813-247-0455.
A diverse range of experience
Fogarty started as a patrol deputy in District II, where he worked for four years. He moved on to the Street Crimes and Gang units, before being promoted to detective in the Criminal Investigations Division. While there, he served in Robbery, Auto Theft and Violent Crimes, and then went over to the Special Investigations Division to work undercover in Intelligence.
In 2011, he was promoted to corporal and went back to Street Patrol, where he supervised a field training squad. Next, he transferred to the Training Division, where he was promoted to sergeant and came to District IV to run a field training squad once again.
Following that he moved back to the Special Investigations Division to supervise its Selective Operations Squad, which included the Internet Predator, Morals [vice], Gang and Illegal Prescriptions units.
After being promoted to lieutenant, Fogarty served as a night-shift commander, district investigations commander and as the deputy division commander of the Training Division.
He was promoted to captain in 2017 and served as deputy division commander of District II before being promoted to major and becoming its commander the following year. 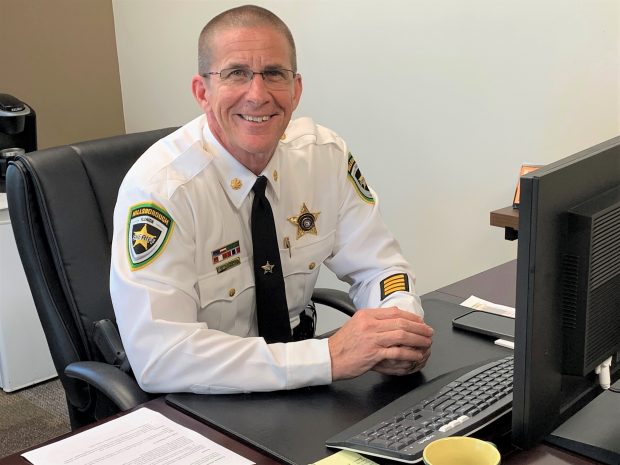 LOIS KINDLE PHOTO
Major Dennis Fogarty, 53, of the Hillsborough County Sheriff’s Office, is South Shore’s new District IV commander. He has been with HCSO since early 1997.

After four years at the helm of District II, Fogarty was transferred in March to lead District IV, when Major Robert Rodriguez was transferred to the Child Protective Investigations Division.
Fogarty was born in Camp Lejeune, N.C., where his father served in the Marine Corps. After the Vietnam veteran’s retirement from the military, the family moved to Hillsborough County.
The major has been married almost 24 years, has two children, ages 13 and 15, and resides in Valrico.
He describes himself as a “gym rat” and in his spare time enjoys mountain biking and traveling.

Mastectomy patients have a new advocate in South Shore