Even though crime is relatively low in Sun City Center, every few months someone comes into the community to trouble residents.
Recently, the senior retirement community has seen a spree of illegal activities, said Hillsborough County Sheriff’s Office Community Resource Deputy Jeff Merry. They’ve included the theft of seven golf carts over four weeks, the reported burglary of five vehicles and suspected burglary of four more, a car theft and several burglaries at residential facilities.
“These were crimes of opportunity,” Merry said. “All could easily have been prevented.” 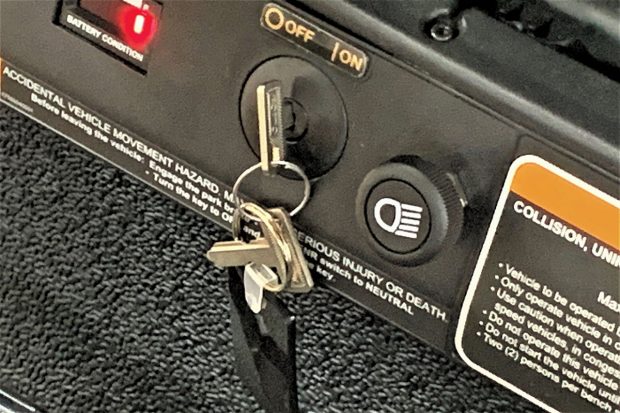 Leaving the key in your golf cart may be convenient, but you’re making it easy for a thief to abscond with your property.

The golf carts were stolen from private residences and a business by Andrew Dale Roberts, a 34-year-old homeless man who stole them with the intention of selling their parts for cash. It was an easy crime because the keys had been left in them.
The man hid the golf carts in two locations, one off Cypress Creek Boulevard and the other off U.S. 301 South, almost to the Masonic Park & Youth Camp in Wimauma, Merry said.
Five have been recovered and returned to their owners. Two are still missing.
HCSO deputies apprehended the thief on April 22, after someone described him riding around the community in a golf cart. He’s been jailed and charged with several counts of grand theft. 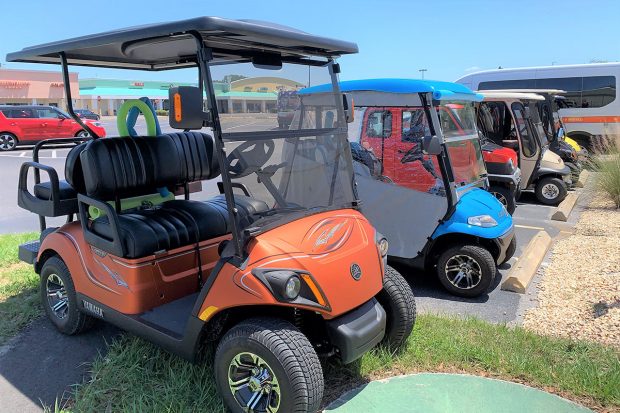 LOIS KINDLE PHOTOS
If you own a golf cart, be sure to take the key with you to prevent it from being stolen. Seven carts were recently taken over a period of four weeks, and all had the keys in them.

While golf carts can be relatively easy to steal because of each manufacturer’s universal keys, a thief would need to have one of these keys to get in and drive away.
Leaving a key in the ignition simply makes the crime easier and can be an expensive mistake for the owner. Unless a golf cart is registered with the Sun City Center Security Patrol, HCSO deputies cannot call the owner immediately to come pick it up. They’re required to call a rotation tow company to impound it.
One of the seven carts, for example, was recovered on a Friday, but since the deputies did not know to whom it belonged, it wasn’t returned to the owner until Tuesday, after Merry had gotten a positive ID from the suspected owner by showing her a photo.
Even for this short period of time, the bill incurred was more than $450, and then to have the cart brought home by a Sun City Center golf cart dealer involved an additional fee, Merry said.
“It’s important to always secure your golf cart,” he continued. “Take your key, keep it in your garage or chain it to something. Purchasing a unique ignition key also helps.”
Vehicles are no different
On May 2, five Sun City Center residents reported their cars burgled and items like cash, sunglasses, prescription drugs and phones stolen from them. All were unlocked.
“We believe these guys started on Del Webb Boulevard and worked their way around to a variety of locations, including Bluewater Drive, Emerald Lake Drive and Atrium Drive,” Merry said. “They entered vehicles that were unlocked and stole whatever was in them to turn into cash. These also were crimes of opportunity.”
The thieves have yet to be apprehended.
Merry said juveniles, checking car doors for the opportunity of stealing items in them, periodically come through the community.
Success makes them and other miscreants want to return.
“Neighborhoods like Panther Trace, South Fork and South Pointe are hammered with vehicle burglaries and thefts,” Merry said. “We’re fortunate we haven’t been targeted more often. If Sun City Center becomes more lucrative for them, thieves will come back. They tend to go where residents make it easy for them to commit a quick crime.”
Keep residences locked 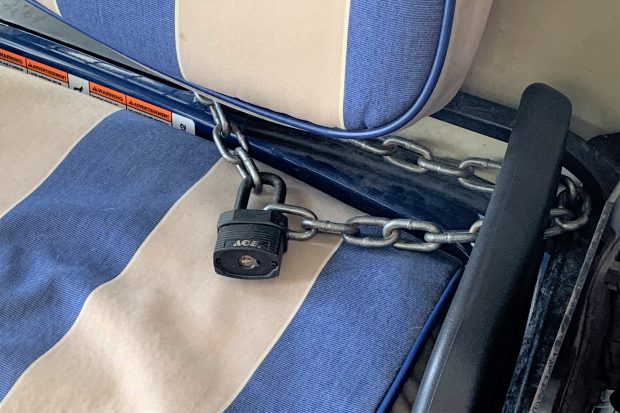 If you don’t have a garage, you can secure your golf cart by chaining it to something or flipping the battery switch under the seat and chaining the seat to the frame as shown here.

At least six residences at Sun Towers and The Courtyards at Aston Gardens were recently entered when Robert Swanson, 51, walked down hallways checking doors for any that were unsecured.
Residents were sleeping as he stole their jewelry, presumably to sell and buy drugs, Merry said.
This same man had been arrested four years ago by Merry and HCSO Detective Phil Merkle. He was prosecuted, sentenced to prison and was released last November.
Due to some good, old-fashioned police work, he was apprehended, jailed and charged with felonies for residential burglaries, Merry said.
Swanson lives with his mother in Sun City Center.
Merry doesn’t want residents to become over-alarmed. But it’s important for them to be more aware and take precautions.
“We still live in the safest community in Hillsborough County, but we shouldn’t be complacent,” Merry said. “As the communities around us continue to grow, we will see a natural increase in our crime rate, but if we all do our part, we can mitigate it by locking doors and securing our valuables and property.
“And if you see something, say something,” he said.
To report a crime or suspicious activity, call (813) 247-8200.