‘They’re creepy and they’re spooky; they’re all together ooky’

If you’re in the mood for a fun evening out with your family or friends, you won’t want to miss East Bay High School’s upcoming presentation of The Addams Family. “The talent, costumes and set are marvelous,” said Krista Blanchette, theater department director. The Addams Family is a hilarious show for audiences of all ages. “Coming out to join us is an affordable way to spend an evening, while supporting a fantastic group of students.”
The creepy musical comedy is the East Bay High School Theatre Department’s final production of the school year. It includes a large cast and crew of more than 30 students and is set to take place at 7 p.m., May 12 to 14, at the high school’s Kathryn Hill Auditorium, 7710 Big Bend Road, Gibsonton. 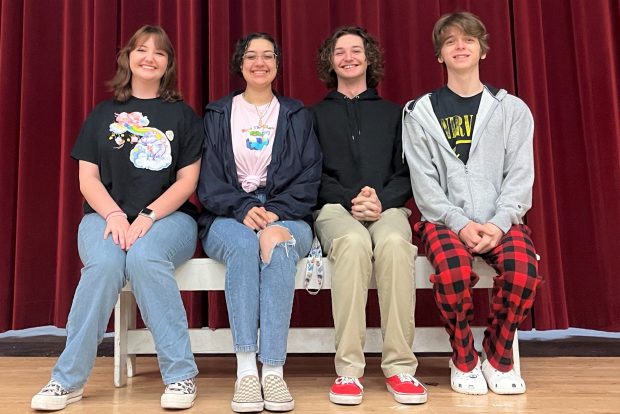 “I always look for musicals that highlight every member of the cast, as opposed to just a handful of lead characters,” Blanchette said. “This show has a large group of lead characters but also includes an ensemble that’s highly engaged as an important part of the storyline.”
The doors open at 6:30 p.m. The two-hour show starts at 7 and is suitable for folks of all ages. A 15-minute intermission is included.
Tickets are $7 per person and will be sold at the door.
The Addams Family musical is based on a book by Marshall Brickman and Rick Elice, with music and lyrics by Andrew Lippa.
The hilarious show features offbeat characters, created by American cartoonist Charles Addams. All of them, including Gomez, Morticia, Wednesday, Pugsley and Grand-Mama, have been represented over the years in newspaper comics, on Broadway and in a popular television series.
“The Broadway production opened in 2010 with a star studded cast, including Nathan Lane and Bebe Neuwirth,” said Blanchette. “It was nominated for several Tony Awards in 2010, including Best Original Score.”
“The story is centered around daughter Wednesday Addams, a character known for her Gothic appearance and spooky personality. When she falls in love with a “normal” boy, both families are mortified. Her Uncle Fester supports the relationship and decides to keep the visiting Addams family ancestors from returning to the afterlife until both families accept their marriage.
There are many funny moments that unfold as the audience sees what lengths both families will go to in the attempt to try to stop the marriage of this most unlikely couple.
The East Bay High School Theatre Department won numerous awards during its 2021-2022 season, including being the Florida regional winner of the Florida State Thespian Performance Top Honor in Small Group Musical; the Florida Regional winner of the Florida State Thespian Technical Top Honor in Costume Construction; and more than 10 “Superior” ratings at Florida State Thespian District Individual Events.
“We did awesome this year,” Blanchette said. “I’m very proud of my students and the work they put in to win awards in both performance and technical theater for the regional district thespians.”
“This big [cast’s members] all have a large amount of stage time and are in many production numbers,” she added. “I really believe in making sure each student feels good about their contribution to the show.”
For more information, email krista.blanchette@hcps.net or call 813-671-5134, ext. 271.