Three outstanding Follies performances in March entertained audiences totaling over 600. After all the production costs were paid, the remaining proceeds were donated to organizations that benefit area residents. Three that received $1,500 checks were the Sun City Center Emergency Squad, Sun City Center Samaritan Services and East Bay High School Music Department.
SCC Emergency Squad Chief Mike Bardell said the $1,500 would be applied to the cost of new lifts they are installing on four vehicles. Samaritan Services President John Mayoka welcomed the contribution, noting that his organization has seven cars for transporting residents that must be maintained, although insurance is the major expense. Brian Nesmith, choir director at EBHS, said the donation would be applied toward the department’s costs for sheet music, uniforms, exhibition entry fees and transportation costs, etc.
Follies director Diane LeFrancois said her team was happy to bring back the show after a two-year hiatus. “The cast seemed to be enjoying themselves, and so did those who attended,” she said. The show differed from previous shows due to some changes, and she and Assistant Director Linda Stone were pleased with the result. It had a cohesive quality because the theme (Life Relationships) was announced early, which gave the performers direction for planning their part in the show. Additions and shifts on the program were a hit, too. The six rookie specialty performers added variety, and the Sounds of Time (East Bay High School’s show choir) performed in both acts. She said they will be considering more format moves and expect additional variety for next year’s show. 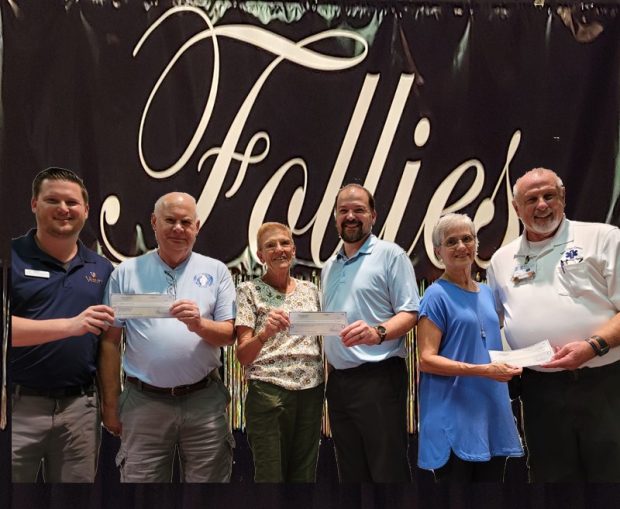 Stone added that the support of Vesta Property Services, management company for the Kings Point amenities, made a major impact on the show’s success. Vesta charges nothing for the venue or services, such as stage lighting, etc., and receives none of the proceeds from ticket sales. Acting General Manager Matthew Permuth said it is gratifying to see the amount of talent the show brings together. He and the Vesta staff consider it a privilege to work with the Follies cast and to play a role in the Follies meaningful contributions.