On March 12, 2022, William “Bill” Louis, devoted husband, loving father and grandfather, passed away peacefully at his home in Sun City Center, Fla., surrounded by loved ones. Bill was born in 1927 and raised on a farm in Kirtland, Ohio. The son of immigrants, he was a proud U.S. Navy World War II veteran, serving on the USS Repose hospital ship as a machinist mate. Bill married the love of his life, Sally Carlson Louis, and they were married for 72 years, until her passing. He was preceded in death by his daughter, Linda Louis Richardson (Craig); wife, Sally Carlson Louis; parents, William and Bertha (Meijer) Louis; and siblings, John, Corry, Catherine, Alice, Ann, Geraldine and Henry. He is survived by his daughter, Laurie Louis DeVilla (Dean); four grandchildren, Will, Sean, Carly and Lauren; his brother, Richard Louis (Betty); and many nieces, nephews, and friends.
A gifted mechanic and builder, as newlyweds Bill and Sally built and renovated several homes near Mentor, Ohio, while working full-time jobs. It was his job with Fluid Controls Inc. (Hynautic, Inc.) that led him to Florida in the early 1970s, moving the family to Siesta Key, Fla. He continued working as the manager at Hynautic in Osprey, Fla., while also owning and operating a small motel on Siesta Key until retirement. Living on Siesta Key for over 20 years, he was able to enjoy his passion for boating, fishing and landscaping. Bill was well-known by his neighbors and friends in Sarasota and in Sun City Center as always being willing to help and lend a hand, treating everyone with kindness and respect, and making the world a better place.
A memorial service will be held on Friday, May 6, 2022, at 9:30 a.m., at the Sarasota National Cemetery. In lieu of flowers, please consider a gift to the UNC Eshelman School of Pharmacy Foundation for the Linda Louis Richardson Scholarship Endowment https://give.unc.edu/donate?f=none (Fund #474515)/.

Beloved father, John L. Leonard Jr., 79, of Sun City Center, passed away on Wednesday, April 6, 2022. John was born on Dec. 10, 1942, in Aiken, South Carolina, to John L. Leonard Sr. and Elinor McFarland Leonard of Broad Axe, Pa.
John graduated from Ambler High School in Ambler, Pa., in 1961, and then enlisted in the U.S. Army. John is a Vietnam War Veteran. After his honorable discharge, John attended Philadelphia College of Art (now University of the Arts), where he studied Industrial Design. During this time, he met his wife of 45 years, Elizabeth ‘Ann’ Cooper Leonard, originally from Swarthmore, Pennsylvania.
John and Ann settled and raised their daughter Carolyn in Wallingford, Pa., where they lived for close to 30 years. John worked for Turner Construction Company for many years before creating his own construction management company.
John was predeceased by his parents and his wife Ann. John is survived by his long-time partner, Mary Braun of Apollo Beach, Fla.; his daughter, Carolyn Leonard of Dallas, Texas; Cousins too numerous to fully mention but including Robert and Doris Bowen of Warrenton, Va.; Marcia Bowen Applegate from Chantilly, Va.; Deanna Pearson Heishman of Front Royal, Va.; and Nora Leonard Magee of Peapack, New Jersey.
John was an active member of the Ruskin Moose Lodge (813) and enjoyed spending time with his partner Mary, dancing, playing billiards, reading and antiquing. Instead of flowers, we ask that you do a stranger an act of kindness. He would like that. We all need a little grace right now. Arrangements by Zipperer’s Funeral Home. 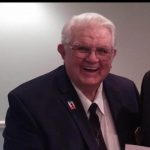 Dale L. Province, born June 9, 1935, went to heaven on the wings of Angels on March 29, 2022.
He was born and raised in Akron, Ohio. After graduating Ellet High School where he played football, won “All City” and was later inducted into the Ellet High School “Hall of Fame,” he went to college on a football scholarship. Then he joined the Army. His career was in Law Enforcement with the Akron, Ohio, Police Department and he loved his job. He retired in 1988 from the department but took on security jobs until he moved permanently to Sun City Center, Fla., in 2000, where he enjoyed the many activities. He loved RVing and traveled from the East Coast to West Coast. When the RVing stopped he did security in Florida and worked at Freedom Plaza for 10 years.
He was an amazing man full of love and laughter. He was a member of the DeSoto Masonic Lodge in Riverview and the Sun City Center Shrine Club/Egypt Shrine. He never knew a stranger and was friends with everyone he met. He loved playing poker at the club and swimming in the pools, and he enjoyed the police breakfasts with other retired members of law enforcement.
He is survived by his wife, Trudy Province, of 37 years; three children, Scott Province, Terri Chapman and Tonda Morgan; two step-children, Cindy Arnold/Donnie Barta and Russell Cederburg; 10 grandchildren and 10 great-grandchildren.
A “Celebration of Life” will be held on May 14 at 1 p.m. in the Banquet Room at the North Kings Point Clubhouse. Coffee/tea, sandwiches and cookies will be served.
No Flowers please. Donations can be made in his name to Akron Police Department Akron Police Widow and Children fund, 217 High St., Akron, Ohio 44308.