The upcoming Sherwood development and its 152 single-family homes in the Wimauma area have cast the spotlight — again — on the dire need to build more schools in south Hillsborough County, according to public school officials who discussed the matter at the March 8 school board meeting.
In pulling the item for further discussion, before its favorable vote on a so-called “propshare” mitigation agreement for the Sherwood development, school board member Melissa Snively said the matter warranted a deeper discussion “because it exhibits the urgent situation that we are in for our school district, with regard to capacity.”
That need is greatest in south Hillsborough County, where Sumner High School, at the border of Balm and Riverview, already has 24 portable classrooms and a wing under construction for 25 additional classrooms, Snively said. As the county’s newest and largest public high school, Sumner opened at the border of Balm and Riverview in 2020 with the capacity to accommodate 2,900 students.
According to school superintendent Addison Davis, his district, the seventh-largest in the nation, needs to build 18 schools over the next 15 years, and 15 of those schools are in south Hillsborough County, one of the fastest growing counties in the nation.
“I want the public to be aware that on this end we are doing everything we possibly can to move forward with finding, locating, expanding and building new schools,” Snively said, “and I don’t want the public to misunderstand that because the school is at capacity, well over capacity, that we don’t have concerns about that. We have serious concerns about the capacity.”
That concern reaches into other parts of south Hillsborough County as well, as noted in the ensuing discussion over the Sherwood development and its need for a so-called “propshare” concurrency agreement to offset the costs of student stations in an area that already has an overcrowded middle school and high school.
School concurrency programs are designed to ensure that adequate school facilities are in place or under construction within three years of the impacts new residential development brings. If the impact exceeds the “level of service” required, and no adjacent school has the capacity to accommodate the new students expected to enroll, a “proportionate share development mitigation agreement” is called for between school and county officials and the developer.
That is the case for Sherwood and the nearby Ruskin schools, given that “there is currently no available middle or high school capacity within the Shields Middle School attendance boundary or Lennard High School attendance boundary,” which encompass the concurrency service area, according to school officials.
School officials say Sherwood’s two-phased development calls for 152 detached, single-family homes, projected to generate 30 elementary school students, 14 middle school students and 22 high school students. School officials say there is no room for the middle and high school students, which requires the developer to pay $428,694 for the middle school shortfall and $833,492 for the high school shortfall. Collectively, the $1.26 million is earmarked for Middle School VV and High School UUU, both of which are targeted to be built on property southeast of State Road 674 and West Lake Drive in Wimauma.
The numbers to the naked eye appear to be small, but to informed observers these additional student stations are a drop in an overflowing bucket, giving rise to the looming prospects of double sessions for overcrowded schools.
Double sessions are a “pain in the butt,” said school board member Henry “Shake” Washington, a retired educator who said he worked at two schools on double sessions. “I think we may have to start thinking out of the box [as to] how fast we can get schools [built] or whatever the case might be.” 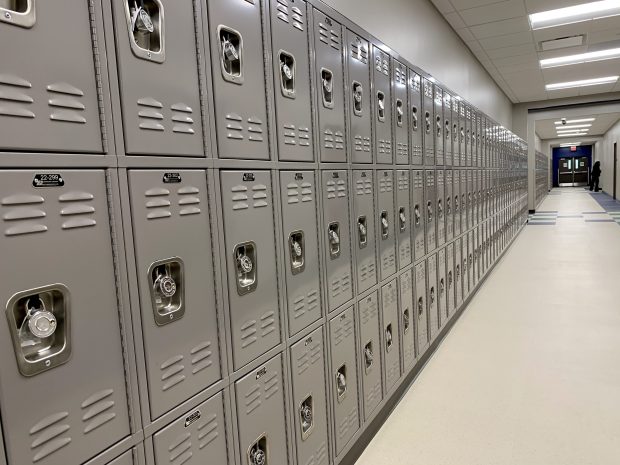 Photo by Linda Chion Kenney
Lockers at Sumner HIgh, the newest and largest high school in Hillsborough County, with portable classrooms and a classroom wing under construction

Superintendent Davis agreed. “We are trying our best to make certain we won’t have to go to double sessions in these schools and it’s taxing,” Davis said. “Just imagine what that would look like at Sumner without having the availability to expand modules” and use portable classrooms. He noted also the need “to find properties that we can build upon” in partnership with the county.
That leads to the State Road 674 and West Lake Drive property in Wimauma. It faces county approval, which was not given for the nearby Bishop Road property, due to road transportation issues. School officials, who own the Bishop property, have appealed that decision.
At the March 8 school board meeting, Chris Farkas, the school district’s chief of operations, said a design professional and construction manager have been hired for “the next high school that is designed to open in 2025 on the West Lake property.” He added that as soon as school officials get the approval to build a school there, “shovels will be in the ground.”

Clock is ticking to keep flying commercially without a Real ID