Late Bulls run too much for Sumner

Sumner opened its playoff bracket as a #2 seed with a 77-57 win over visiting Braden River on Tuesday, Feb. 8, and ended its playoff run the next night with a home 57-46 loss to the #3 seed Bloomingdale on Wednesday Feb. 9.
Sumner basketball entered a very promising playoff season with a home game against Braden River. Sumner was challenged in the early going and the Pirates ended the first quarter with a 13-12 lead. The Stingrays accepted the challenge and decisively won the second quarter 21-7, using a pressure defense that led up to good looks at the basket. Sumner ended the first half with a 33-20 lead and never looked back. The Pirates put up a fight in the third quarter but still lost the quarter and the Stingrays increased their advantage entering the final period, going up by 17 points. Braden River scored 21 points in the fourth but that only had the final score looking closer than it was, and the Stingrays closed out the 77-57 win. Caleb Williams had a monster game with 29 points, including draining seven 3-pointers. Stingray senior Tyrell Smith added 15 points. Braden River players Heaven and O’Neal contributed 17 points each in the loss. 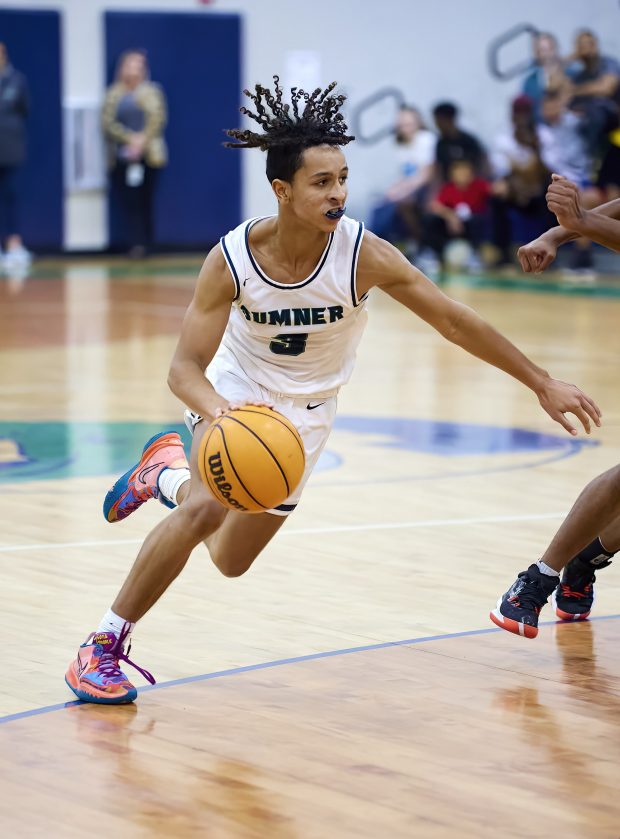 Stingray senior Tyrell Smith drives around the Bloomingdale Bull defense on his way into the lane.

The Stingrays faced a bigger challenge in visiting Bloomingdale, the eventual winner of the district bracket. The Bulls traveled to Sumner with the momentum of a 17-point win over Lennard and had only lost two road games all season. As with Braden River, Sumner would lose the first quarter 12-9, but would find its stride, winning the second quarter 18-10 and looking to have the momentum at the half, leading 27-22. However, the Bulls tightened up on defense and only trailed the Stingrays by three points at the end of the third quarter. In the Sumner win over Braden River, the Stingrays posted a 23-point fourth quarter, but the Bulls tallied the 23-point fourth quarter and Sumner couldn’t match the Bloomingdale run, only scoring nine points in the final period and seeing a very promising second season of Stingray basketball end. Izzy Vargas led the Stingrays with 21 points, with five of those as 3-pointers. Caleb Williams, a prolific scorer in his freshman season at Sumner, was held to 5 points by the tenacious Bulls defense. Sumner plays an away game at Gaither on Thursday, Feb. 17th in the first round of State playoff action. 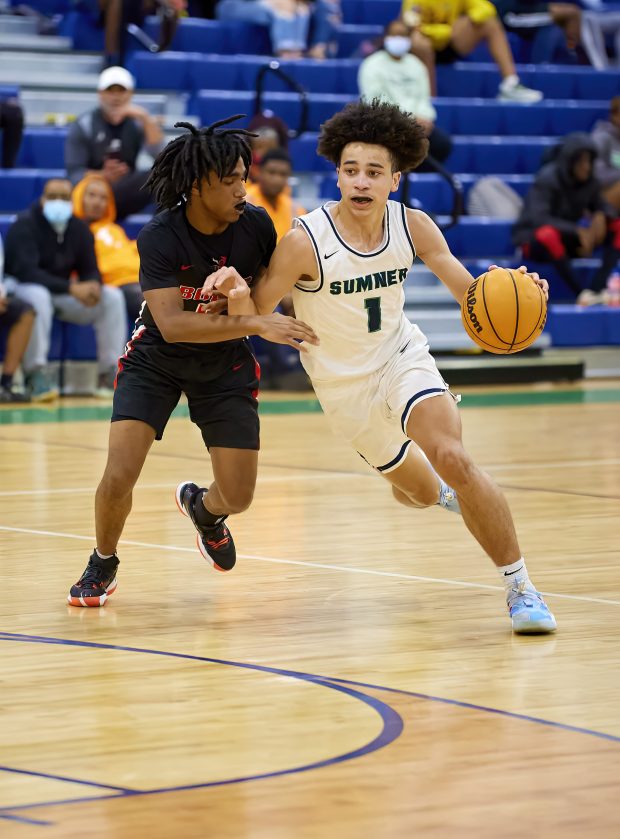 Stingray senior Tyrell Smith drives around the Bloomingdale Bull defense on his way into the lane. 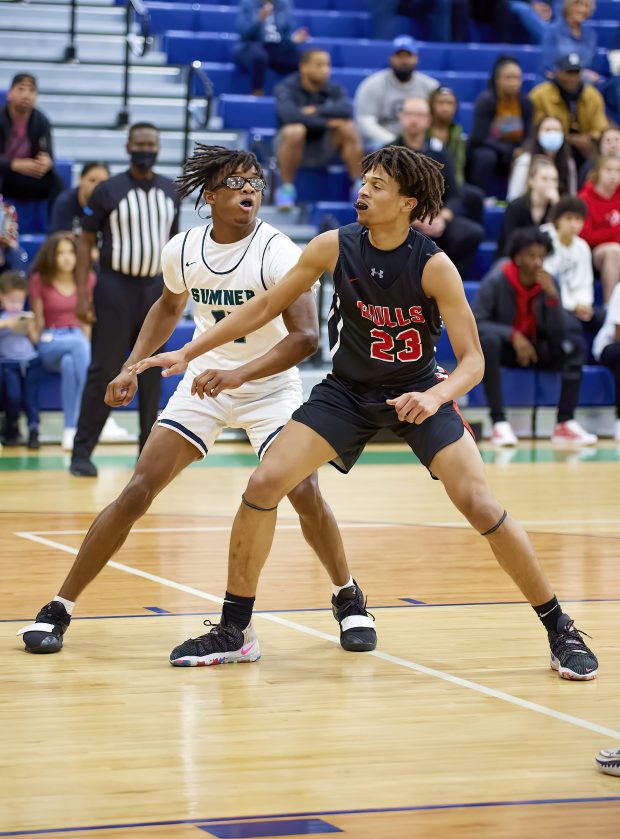 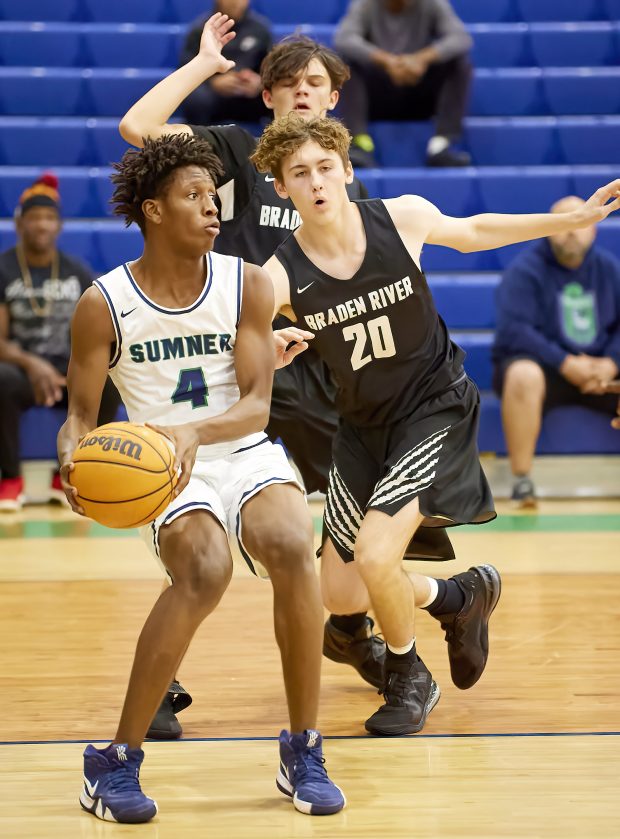 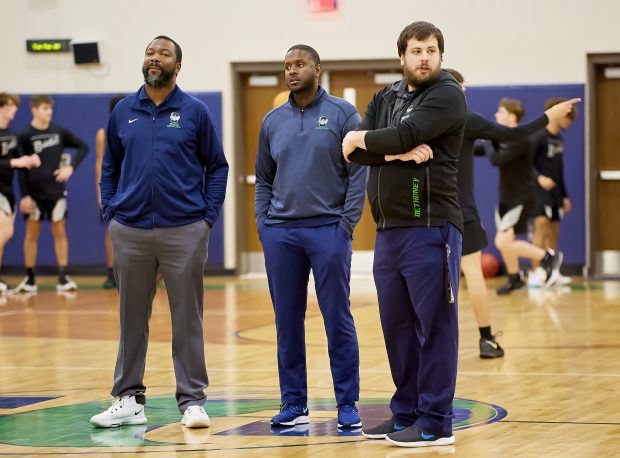 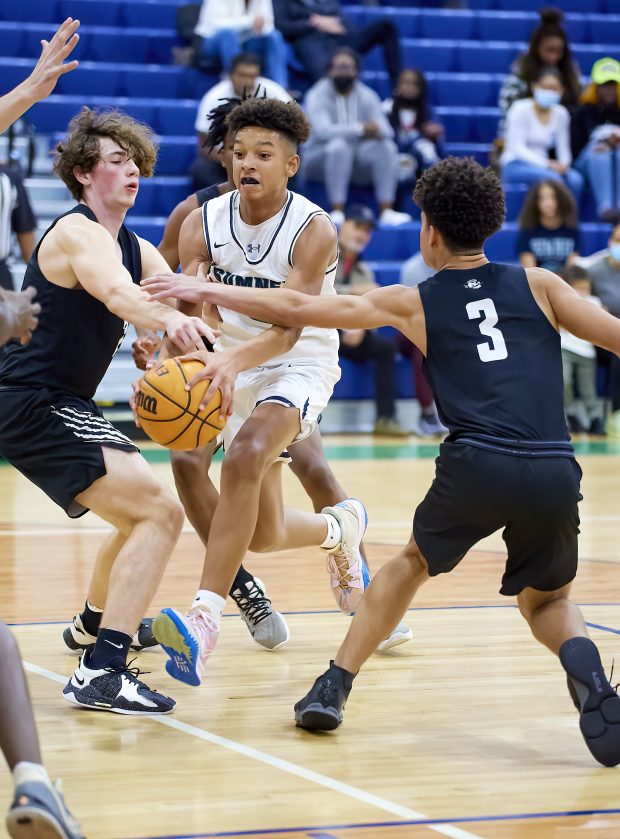