The Stingrays played two games for the week of Jan. 17., losing at home to Bloomingdale, 48-35, and bouncing back with a rout of Brandon, 78-36, on the road.
Sumner basketball started a stretch of four games that will bring its regular season to an end. The Stingrays started on Tuesday, Jan. 18, with a home game vs. Bloomingdale HS. As was a theme with a number of the Stingray losses, the players got off to a fast start, winning the first quarter 14-9. Sumner could not sustain the momentum, and the Bulls won the second quarter and held a 25-20 lead at the half. The Stingrays played without their star freshman, Caleb Williams, and that could have had an impact on the scoring. Sumner gave the Bulls a challenge in the third and closed to within a point, but the Stingrays could not pull any closer and lost the fourth quarter and the game. The Stingrays were led by junior Izzy Vargas with 15 points in the losing effort. Sumner bounced back the next night, Wednesday, Jan. 19, playing at Brandon HS in front of a senior night crowd. The Stingrays, playing tenacious defense, built a 45-18 lead and the game was never in question. The Stingrays emptied the bench vs the Eagles, and everyone ended up scoring at least a basket. Sumner was led by Gerald Morris with 12 points and Izzy Vargas with 10 points. Sumner freshman standout Caleb Williams returned to the lineup and added 9 points, and senior Tyrell Williams also added 9 points. The final quarter was played with a running clock as Sumner had built a better than 35 point lead and kept the Stingrays from scoring more than the 78 point final total. The Stingrays ended the week with their overall record at 10-7 with a 4-3 record against FHSAA 6A District 11 competition.
The Stingrays will have played at home vs. Hillsborough on Tuesday, Jan. 25, before this edition goes to press, and will finish up their regular season on the road at Robinson HS on Friday, Jan. 28, where Sumner will look to avenge last season’s 72-60 loss at Robinson. 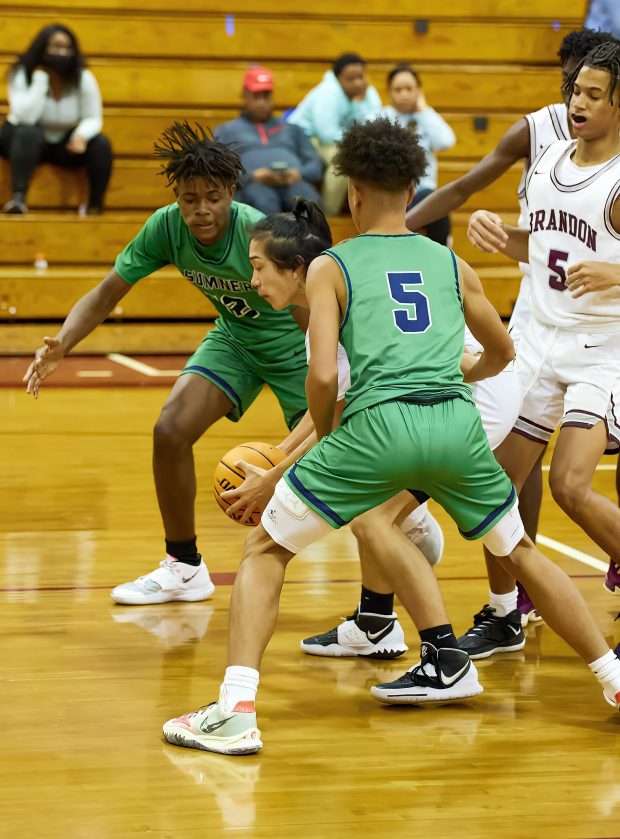 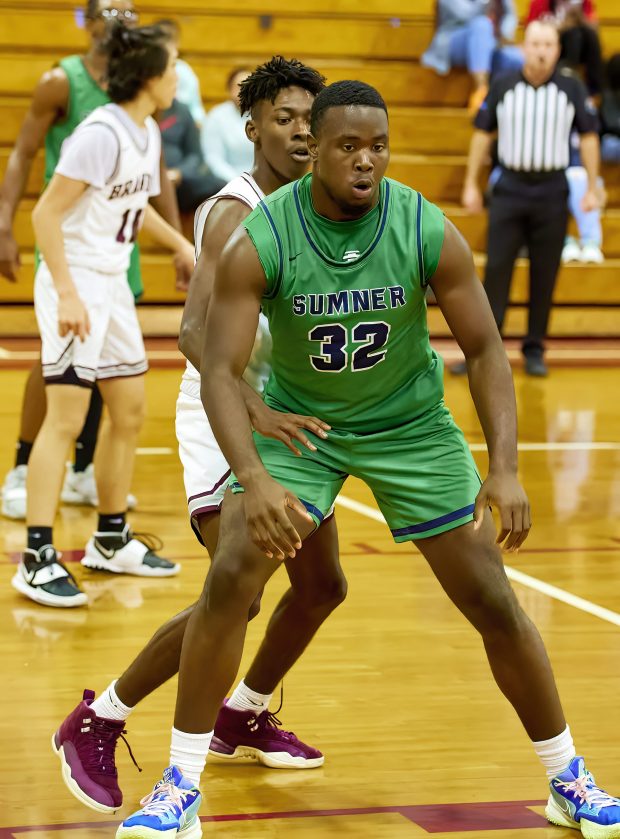 DJ Jones posts up against a Brandon defender. 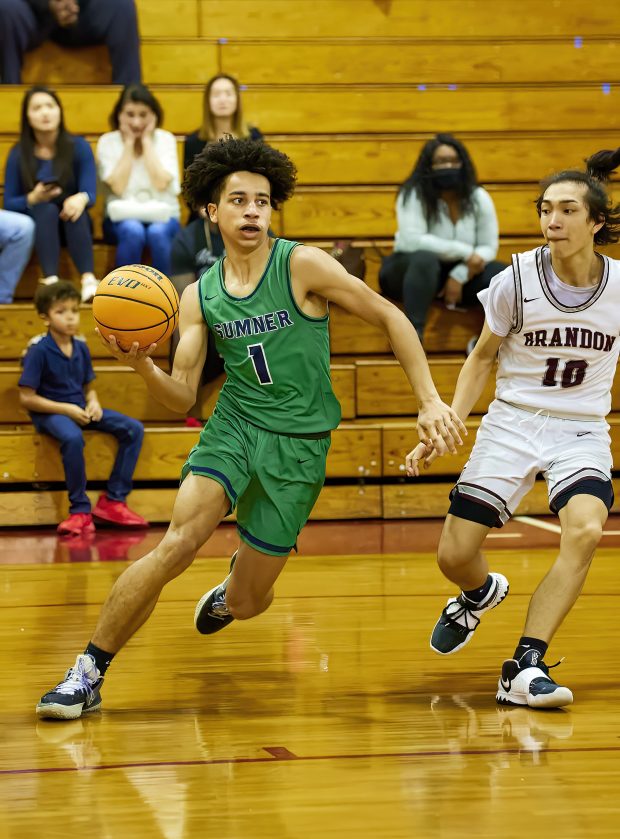 Tyrell Williams goes around a defender on his way into the lane. 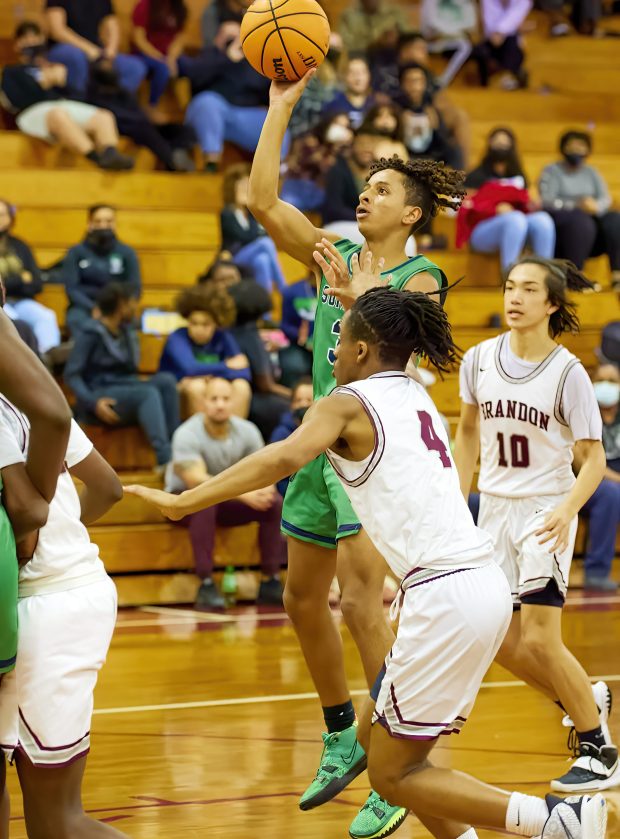 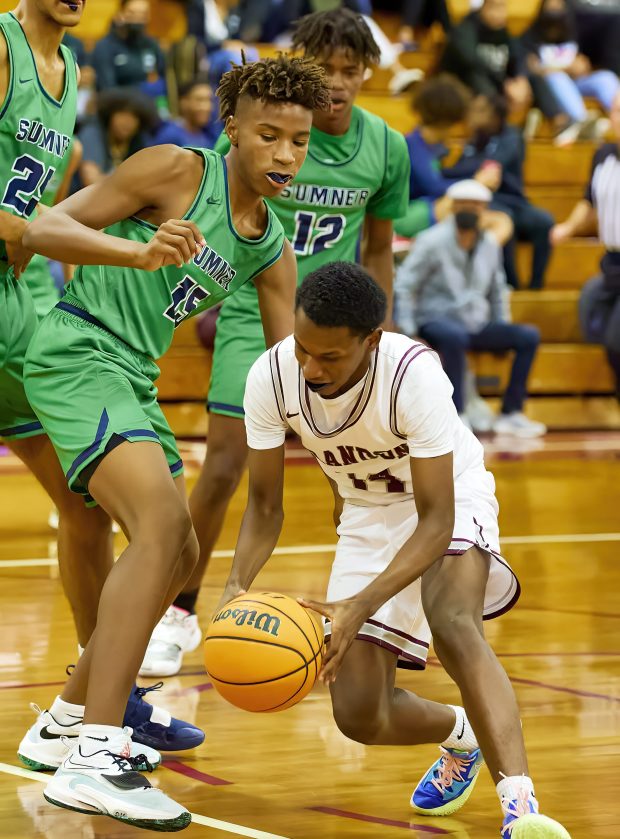