The rising population figures in south Hillsborough County are not all attributable to the migration of people moving to south Hillsborough County in droves. Added to the mix are the newborn babies, whose arrival in 2021 at St. Joseph’s Hospital-South in Riverview set the record for new births in a single year since the hospital opened in 2015.
“We thank all the families who chose and trusted us as the hospital to deliver their children,” said Phil Minden, president of St. Joseph’s Hospital-South off Big Bend Road, at 6901 Simmons Loop. “And I congratulate and thank the doctors and our maternity teams who helped us achieve these milestones.” 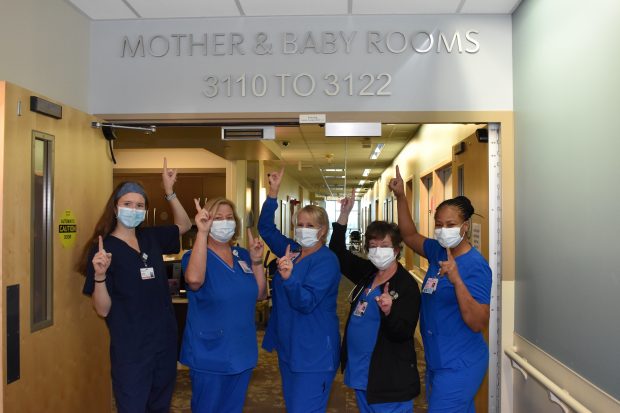 Courtesy Photos
Team members at St. Joseph’s Hospital-South show they are No. 1 in celebration of the Mom and Baby unit’s record-breaking year for births in 2021.

Minden said he is excited to hear “soft chimes ring again often in our hospital,” and that he anticipates their sounding “nearly 2,000 times” in 2022. The chimes are a tradition at St. Joseph’s, their sound heard every time a baby is born.
As for the new year, it started with the birth of Faith McDonald, born to her Riverview parents, Ashley and Justin, at 3:45 p.m. on New Year’s Day. The name was most popular in 2002, one year after the infamous Sept. 11 terrorist attacks, when it ranked No. 48 on the Social Security Administration’s list of most popular female names in the United States.
Last year’s chimes marked the births of 24 sets of twins, which also set a St. Joseph’s Hospital-South record. The 48 twins, along with another 1,691 babies, helped account for the 44 percent increase in births over 2020, which numbered 1,209.
“South Hillsborough County is an extremely rapidly growing area, and many families are moving into the area as evidenced by the area construction, traffic and overall volume growth at St. Joseph’s Hospital-South,” said Michelle Landy, the hospital’s operation’s director, in positing a reason for the hospital’s baby boom.
But another factor weighs in as well, Landy said, noting the February 2021 opening of the hospital’s 11-bed Neonatal Intensive Care Unit for babies born prematurely or with special health needs. The unit provides specialized care 24 hours a day, seven days a week, for newborns and their mothers, who are allowed to stay with their babies in their rooms during their NICU stays. The unit is staffed by neonatologists, obstetric and pediatric hospitalists and board-certified maternal fetal medicine physicians and certified nurses. 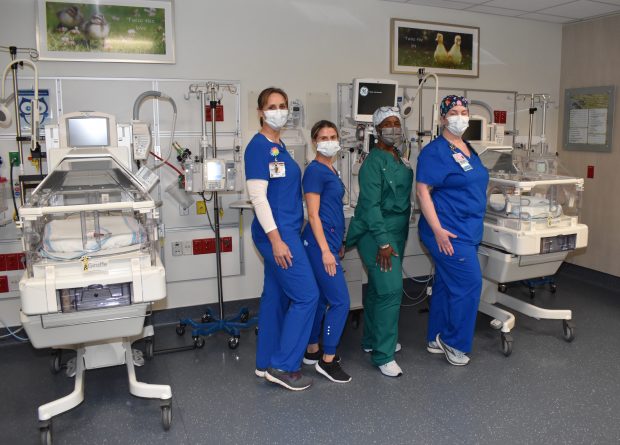 Team members in the Neonatal Intensive Care Unit at St. Joseph’s Hospital-South in Riverview. The 11-bed NICU opened in February 2021.

Babies requiring higher levels of care can be transferred to the Level IV NICU at St. Joseph’s Women’s Hospital in Tampa.
“During pregnancy we know how important it is to have available the resources needed,” said Jenny Leistl, director of patient services in obstetrics for the BayCare east region division, under whose jurisdiction St. Joseph’s Hospital-South falls. “We want to make the birth experience special and support our patients from pregnancy to parenthood.”
While 2021 marked a record-breaking increase in St. Joseph’s births, the highest percentage increase in the hospital’s history came in 2016, when that year’s 962 births represented a 56 percent increase over the 616 births in 2015.
Roughly half of last year’s 1,740 births were accounted for in five months (November, July, June, May and March), with November leading the list with 184 births, followed by July (163), June (162), May (130) and March (124). 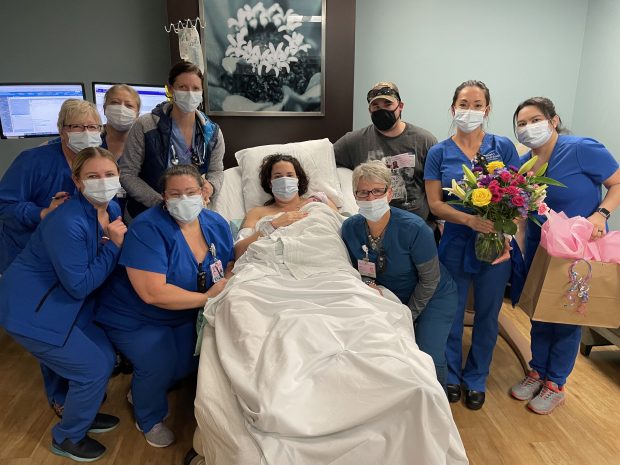 Resting on her mother’s left shoulder is Faith McDonald of Riverview, the first baby born at St. Joseph’s Hospital-South in 2022. Her delivery clocked in at 3:45 p.m. New Year’s Day. Her parents are Ashley and Justin.

On the list of most popular female names for 2021, Faith ranks No. 138, down 18 spots from the year before, according to BabyCenter.com. The top 15 names on the list for female names (ranked 1 to 15), were Olivia, Emma, Amelia, Ava, Sophia, Charlotte, Isabella, Mia, Luna, Harper, Gianna, Evelyn, Aria, Ella and Ellie. Likewise, the year’s most popular male names were Liam, Noah, Oliver, Elijah, Lucas, Levi, Mason, Asher, James, Ethan, Mateo, Leo, Jack, Benjamin and Aiden.
The Social Security Administration, as of Jan. 23, had not yet posted the most popular baby names for 2021. Its 2020 list includes the same top female names as the BabyCenter.com list for 2021, except that Camila and Abigail are noted, but not Ana and Ellie. As for the male names, the Social Security 2020 list includes William, Henry, Alexander, Michael, Daniel and Jacob in the top 15, but not Levi, Asher, Mateo, Leo, Jack and Aiden.
Visit www.StJosephsSouthMaternity.org to learn more about the hospital’s maternity services, it includes a video tour of the hospital’s labor and delivery rooms. To research the popularity of names over the past 13 decades, visit www.ssa.gov and search for “baby names.”