Roamin’ Oldies Car Club is celebrating its 20th anniversary this year. Based in Sun City Center, the group’s roughly 100 members enjoy getting together simply to share their love of cars and trucks: fixing them, driving them and showing them off. It’s billed as “car club for old cars and the young at heart.” 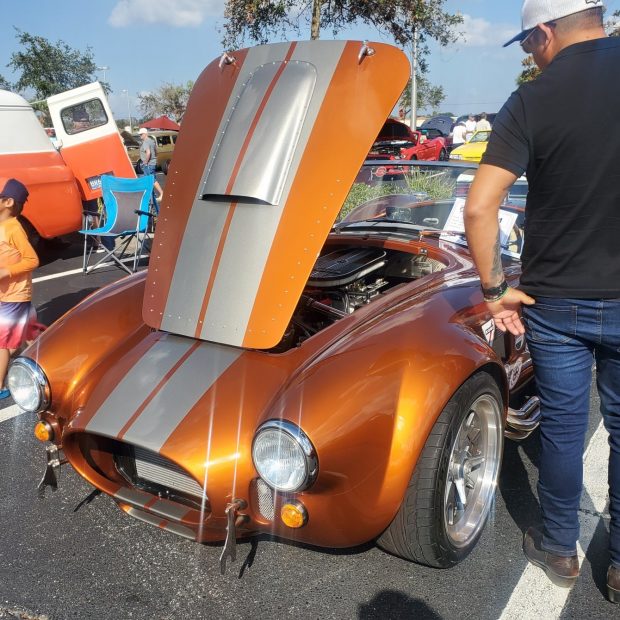 DON NOVAK PHOTO
You might see a 1965 Ford Cobra like this one when you attend a Roamin’ Oldies Cruise-in, the first Sunday of every month from 1 to 4 p.m. at the MiraBay Village Shopping Center on U.S. 41 in Apollo Beach.

The Roamin’ Oldies includes folks from all over southern Hillsborough County, Palmetto and Bradenton.
“They own everything from antiques, collectibles and street rods; race or sports cars; award-winning restorations; an occasional tractor; and works-in-progress of questionable ancestry,” said Paul Courter, the club’s communications director. “The cars are the center of attention, but it’s really the people who make the club. Members quickly become friends and are happy to share their knowledge and experience.
“No one is a stranger for very long, and there’s no social strata,” he continued. “The guy you’re talking carburetors with could be a company president or a delivery driver. The closest thing we have to royalty is a mechanic who can tell you why your old pickup coughs under acceleration.”
Membership in the Roamin’ Oldies is open to anyone, even folks who don’t have a vehicle to show. All that’s required is a love for cars and trucks. Annual dues are $24 per year.
One of the club’s favorite activities is its monthly cruise-in, which takes place the first Sunday of the month, weather permitting, from 1 to 4 p.m. at the MiraBay Village Shopping Center on U.S. 41 in Apollo Beach.
The event is free for participants and visitors alike and includes entertainment by DJ Joey Ferrante. Between 75 and 100 vehicles are usually shown.
Owners and spectators vote on their favorite car or truck displayed, and the vehicle with the most votes is awarded Cruiser of the Month. 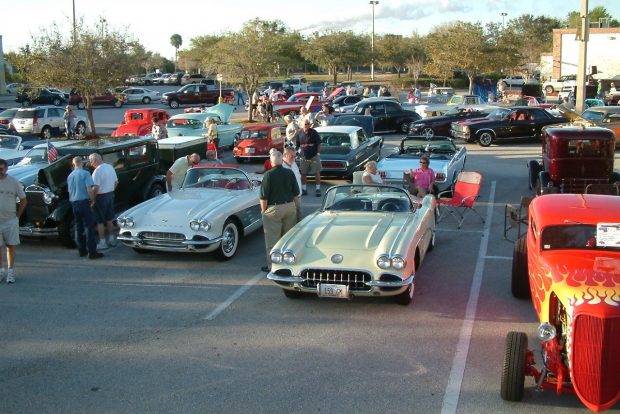 ROAMIN’ OLDIES PHOTO
The Roamin’ Oldies Car Club is celebrating its 20th anniversary this year. Its members are car enthusiasts who enjoy getting together simply to share their love of cars and trucks, fixing them, driving them and showing them off.

But that’s not all.
Roamin’ Oldies members also show their vehicles in a wide variety of shows, held by other organizations in locations like Plant City, Tampa, Palmetto, Ellenton, Lakewood Ranch, Old Town Kissimmee and more. 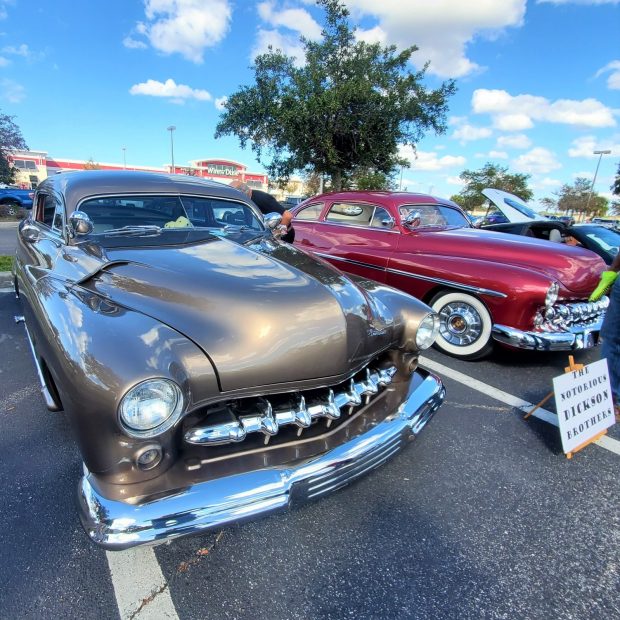 How it all started
The story goes that a few car enthusiasts who wanted to get their vintage vehicles out of the garage and out on the road got together in 2002 to organize a club. Their first gathering included eight cars and took place on a Sunday afternoon in the old Walmart parking lot in Ruskin. Membership grew gradually through mailers and by word of mouth.
Club members initially would drive to events hosted by other organizations, but then they decided to organize a monthly cruise-in of their own. Thompson Auto Parts signed on as a primary sponsor, and a DJ was hired to make the monthly event more festive.
Other sponsors include Gateway Classic Cars, Haggarty Classic Car Insurance, Mark McElwain Custom Exhaust and the Florida Railroad Museum.“Our events are open to anyone with a vehicle they want to share or have on a wish list,” Courter said. “Our cruise-ins typically show a range (of vehicles) from a 1920’s Model T hot-rod to a Tesla electric or new-generation Corvette.”
For more information, visit www.roaminoldies.com/.