Roots of the game of Bingo stretch back to 1530. In Sun City Center, it has deep roots as well. Its beginnings can be traced back nearly 55 years, and players are just as passionate about the game as ever. Every Monday night, a room full of enthusiastic players stream into the Community Hall on S. Pebble Beach Boulevard.
Karen Marmon, Bingo co-chair, said that their numbers are rebuilding following last year’s pandemic shutdown. The 200 or so who came to play on Monday, January 10, heard a special report by Marmon and Gerry Ready, treasurer, about the group’s holiday gift/card program started in 2017. Each extended thanks and appreciation to the members for the support and compassion they had exhibited with their support. 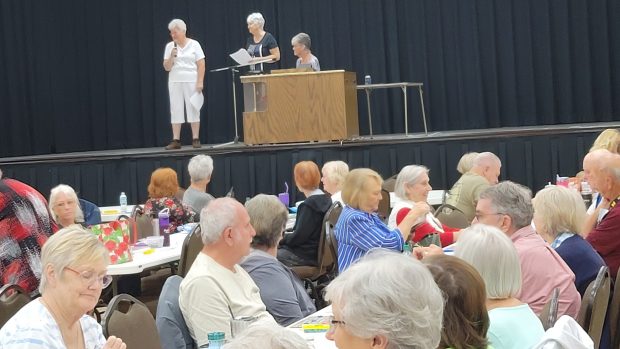 The players had collected about 1,700 gifts and 3,700 cards that were delivered just before Christmas to 1,810 very appreciative residents of the community’s 23 assisted living, long-term Care, memory care, rehab, hospital and independent living facilities. In addition, 40 jigsaw puzzles were given to the independent living facilities to be enjoyed by all. Goodie bags of cookies, candies and mints went to each resident of the other facilities. All the gifts were either direct donations or purchased with the revenue from water, soda and ice cream treats available at the Monday Bingo sessions.
Players were advised collections for this year will be starting immediately. “A little each month makes for a great end of year,” Ready said.
Bingo is thought to be of Italian origin and no doubt changed somewhat as it traveled from country to country over the years. The game as we know it in the U.S. was popularized in 1929 by Edwin Lowe, a New York toy salesman. He was amazed at the enthusiasm he observed among players from all walks of life at a country carnival in Atlanta, Georgia. It was called “Beano” then because players used dried beans to mark cards, but during one game, a lady got so excited by her win that she yelled “Bingo!” The name stuck. Lowe introduced the game to his friends, and it rapidly gained popularity all over the country as a small stakes gambling game, mostly used for fun at home, charity and other events. 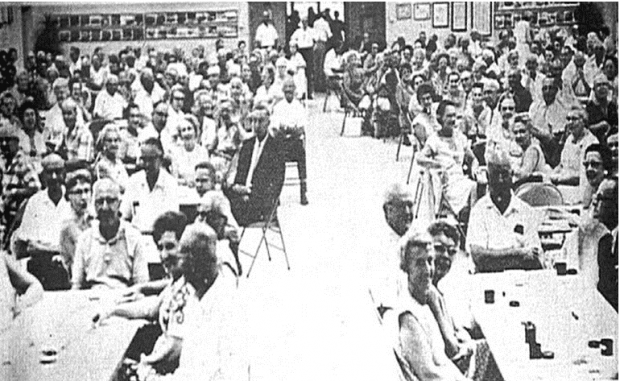 This 1967 photo from the Sun City Center History Society archives shows one of the first Bingo sessions in the Old Town Hall (before Community Hall existed). Reportedly, 300 people participated.

Bingo in Sun City Center is sponsored by the SCC Community Association. “We are celebrating 55 years of Bingo in our community, and I personally thank the Bingo committee. Not only have our players enjoyed the game, but they have made holiday donations that brought joy and cheer to many of our residents,” said CA President Bob Sullivan.
Co-chairs Karen Marmon and Robin LeMaster lead the team of three dozen volunteers willing to do the work involved to make the weekly sessions go smoothly. For Bingo information, email Karen Marmon: twolaker@aol.com/.