The Community Foundation of Tampa Bay is sponsoring a free Presidents’ Day tour of Patriot Plaza and the Sarasota National Cemetery. All South Shore area veterans and their spouses are invited to participate.
Widowers and widows of veterans are also invited.
Reservations for the tour are required. To do so, visit HonorTour.Eventbrite.com and click register. The deadline is Feb. 14. For more information, call 813-282-1975 or email info@cftampabay.org. 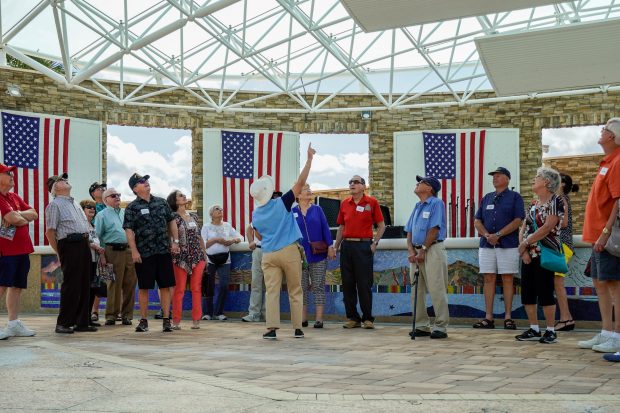 Depending on the response, a charter bus or buses will depart at 9 a.m. Feb. 21 from Community Hall, 1910 Pebble Beach Blvd. S, Sun City Center, and return around 3 p.m., after a private tour of the plaza, led by cemetery guides, and complimentary lunch at Der Dutchman, a popular Amish restaurant in Sarasota.
Participants may also visit gravesites at the cemetery, if they desire, said Wilma Norton, Community Foundation of Tampa Bay vice president of community engagement.
“This will be the fifth year we’ve hosted this event,” she continued. “Veterans are very important to us, and this is one of the ways we thank and honor them.”
The concept of offering an annual tour of Patriot Plaza came from Marlene Spalten, Community Foundation of Tampa Bay CEO. 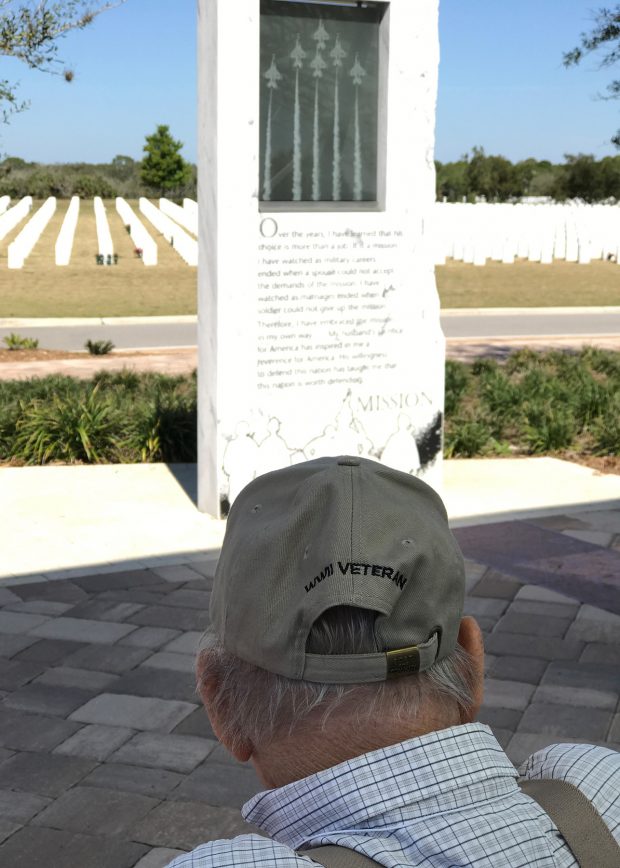 “When I attended the grand opening, I was incredibly moved by Patriot Plaza and by its thoughtful, reverent design and artwork,” she said. “I’m from a military family, which made it even more powerful. That gave us the idea to share the Patriot Plaza experience with our local veterans.”
Spalten charged Damon Glisson, chairman of the foundation’s South Shore Council, with putting something together.
“I decided we should do a tour on Presidents’ Day,” he said, noting he modeled it “a bit after the Honor Flight.
Glisson’s grandfather served as a doughboy in World War I, and his father was a B-24 tail gunner in Germany during World War II. Honoring their service and that of other veterans is a cause very close to his heart.
“Growing up in the ‘60s and 70s, I saw how poorly our veterans were treated,” he said.
Glisson noted it was decided early on to include family members in the tour as well.
“Some of the memorials in Patriot Plaza honor their sacrifices,” he said.
Glisson said reaction to the tour is very moving.
“No one leaves there with a dry eye,” he said. “Because of that, after the sobering experience, we take everyone to lunch to celebrate. You’d be surprised how many stories get exchanged there.”
The 295-acre Sarasota National Cemetery is at 9810 State Road 72, Sarasota. The land was purchased from private owners by the U.S. Department of Veterans Affairs in 2007, and the cemetery was formally dedicated the following year. It was opened for burials in 2009.
The 2,800-seat Patriot Plaza was completed in 2014, thanks to a funding donated by The Patterson Foundation of Sarasota.
For information, call 877-861-9840 or 941-922-7200. 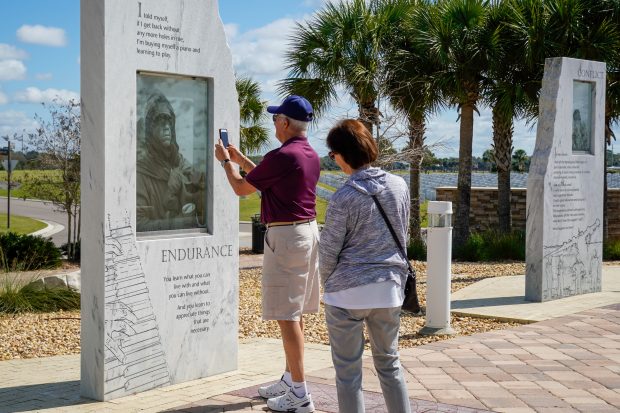 COMMUNITY FOUNDATION TB PHOTO
A veteran stops to take a photo of one of the memorials at Sarasota National Cemetery’s Patriot Plaza during a Community Foundation of Tampa Bay Honor Tour a couple of years ago.