South Shore sports guru goes all out for international youth

Jonathon Tepes Sharkey of Ruskin grew up loving to play different sports during his years and seasons in New Jersey. As a youth, Sharkey loved baseball as well as ice hockey. Sharkey idolized baseball players, like catchers Johnny Bench and Steve Yeager.
Sharkey, who still plays catcher in amateur baseball and softball in the Tampa Bay area, wears either #5 for Bench or #7 for Yeager as his uniform number.
This past year, Sharkey played for the Temple Terrace Tornadoes of the Riverview Softball League. The Tornadoes finished a strong second for the summer season. He also practices several days a week at D-Bat SouthShore in Ruskin.
Sharkey and his wife Oksana returned to their Ukranian home in Ternopil, Ukraine, in late September for Sharkey to start teaching hockey to the youth of Ukraine. Sharkey gave hockey demonstrations to school children in Lutsk, Ukraine, where he formerly lived with his wife who is from the Ukraine. 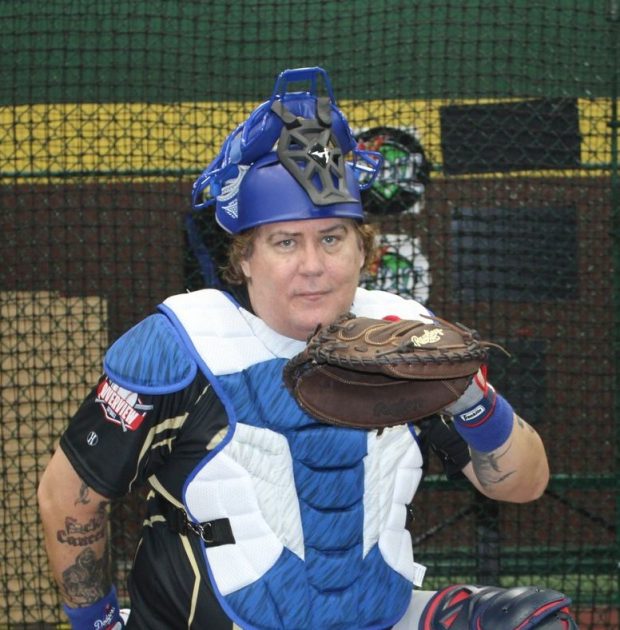 Jonathon Sharkey behind the plate at his favorite position: catcher.

Did you know that Ukraine, population 45 million and the second largest country land wise in Europe behind Russia, has baseball organizations at all levels, including a Little League organization for ages 8 to 12? Neither did Sharkey, until he spoke with Basil P. Tarasko who is a district administrator for Ukraine Little League Baseball. Tarasko, like Sharkey, lives in the US in New York City as well as in his home country of Ukraine. Tarasko is considered the modern-day example of Johnny Appleseed for youth baseball in Ukraine. Similar to sports in the US, the mantra for Little League Baseball in Ukraine is “Character, Courage and Loyalty.” However, for a country like Ukraine, it is more difficult to incorporate. Ukraine is in its early development as a democracy and remains living under the threat of invasion, war and some sort of takeover from a possible re-invasion from neighboring Russia. Instilling these three virtues into a culture like Ukraine, which is rife with poverty and uncertainty, is a tremendously difficult process.
Sharkey, who decided to introduce baseball to Ukrainians in Ternopil and Lutsk, was shocked to find out about Ukraine’s baseball organizations through conversations with Tarasko and by Sharkey’s firsthand experiences recently in Ukraine.
Though Ukraine has baseball fields and diamonds, Sharkey’s goal is to make a real life Field of Dreams, just like in the Kevin Costner’s 1989 movie Field of Dreams, in Romanove Selo, Oksana’s birthplace and where they live in Ukraine.
On Aug. 12, 2021, the New York Yankees and Chicago White Sox played in Iowa on a replica Field of Dreams baseball field next to the movie field.
Sharkey says Ukraine may have baseball fields, but they do not have a Field of Dreams…yet. According to Sharkey, if you are going to make something in Ukraine, make it something Ukrainians have never seen before!
Sharkey is presently raising money for baseball equipment for the youth in Ukraine, and, just like with his hockey program, the members of his Tampa Bay church, St. Michael’s Orthodox Church and Father Stephen have stepped up and contributed to help the youth of Ukraine have the equipment they need to participate on the diamond in Ukraine.
Rawlings Sports International and its sister company, Easton, based in the US, have agreed to help Sharkey with the equipment for Ukraine.
In early 2022 Sharkey will be filing with the State of Florida, Ternopil (Ukraine) Youth Baseball Organization as a 501(c)3, so he can collect tax-deductible contributions to buy more baseball equipment and to buy the land to build a Ukraine Field of Dreams.
Presently, Sharkey is taking coaching courses from USA Baseball to get his coaching certificate. Sharkey regularly uses an orange-colored baseball bat to show support for fighting Leukemia, which his daughter died from in January 2018.
Sharkey recently received words of great support and optimism from Tarasko:
“My name is Basil P. Tarasko, and I am the district administrator of the Ukraine Little League baseball program since 1995. I was born in Germany to Ukrainian parents. My mission is to give something back to the country of all my ancestors
“My role is to organize the yearly Ukraine Country Baseball Championships. To date I have put together 32 Championships in three different ages groups. The first Little League Championship was held on July 4, 2000, when the Honorable US Ambassador to Ukraine, Steven Pifer, threw out the first pitch of the final game in Kiev.
“Due to generosity of the Self Reliance (NY) Credit Union and the California Association to Aid Ukraine, I was able to fund the housing and meals costs of all the boys and girls competing at the various tournaments. I also organized ten championships for orphans and disadvantaged children because of the kindness of my many sponsors.
“I am also happy to announce that Jonathon Tepes Sharkey is planning to start a Little League baseball program in a village near Ternopil, Ukraine. In addition, the Baseball For Good organization has pledged to sponsor the third Ukraine Junior Championship in 2022 and 2023. 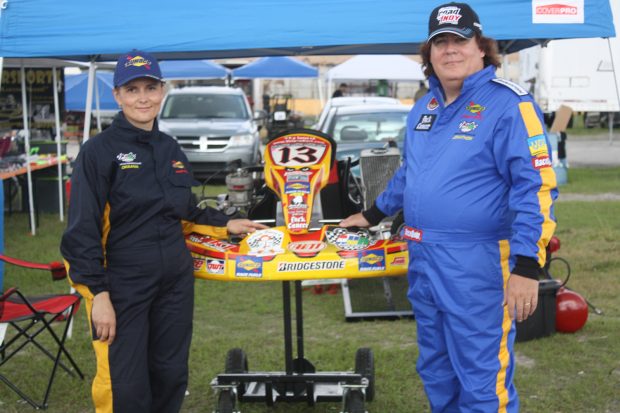 Jonathon Sharkey, at right, and wife Oksana, at left, have been involved in Tampa Bay and in Europe in various sports. Sharkey developed his interest in Ukraine when he married Oksana, a Ukranian, in 2014. She is qualified for US dual citizenship. Oksana, who worked professionally at a Tampa hospital and developed as a car racer, is now involved in baseball and softball. Says Sharkey, “People should be able to play sports, no matter if they are rich or poor, and have a fair chance to succeed in life. They should be able to live their dreams the best way they can.”

“Because of the kindness of many people and organizations in the US, hundreds of children interested in baseball in Ukraine benefited from their generosity. Thank you,” concludes Tarasko.
Various comments of support for Sharkey and a possible Field of Dreams have also been received from other sources in Ukraine, such as
“When caring people get together to make the lives of our young people better through sports, then there is a great result. One person is never enough. My hope is that these young players remember what was done for them. Then as they grow older and smarter, they, too, will do good to others. Thank you all for helping the youth of Ukraine.”
The people in Ukraine know they are fighting an uphill battle. They tell Sharkey: “We are a dedicated group of volunteers who believe in children, believe in bettering the lives of those less fortunate and love baseball!

How about dinner and a mystery to kick off the new year?