Florida high school football ended the 2021 season with a strange 7-7 tie in the annual Hillsborough County East-West All Star game at Hillsborough High Stadium Dec. 20.
The famous coach, Bear Bryant, used to say a tie is like courteously kissing your sister. Shutout for all but the 30 seconds of the defensive battle, the West stars were happy to get in any kind of smooching and almost salvaged a last-second victory. After knotting the game late, the West had the East quarterback nearly trapped in the end zone, trying for an impossible miracle of his own. But the East quarterback of Durant High wiggled out of trouble with an incomplete pass. The West was denied a 2-point safety, leaving the tie as the final buzzer declared the game over.
Players on both sides were somewhat confused as they probably had not read or were not informed concerning the fine print of certain restrictions for the All Star game. To prevent injuries, both coaching staffs worked with their units to comply with the restriction against any defensive blitzes. However, the notation about “no overtime” was obviously not very well understood. 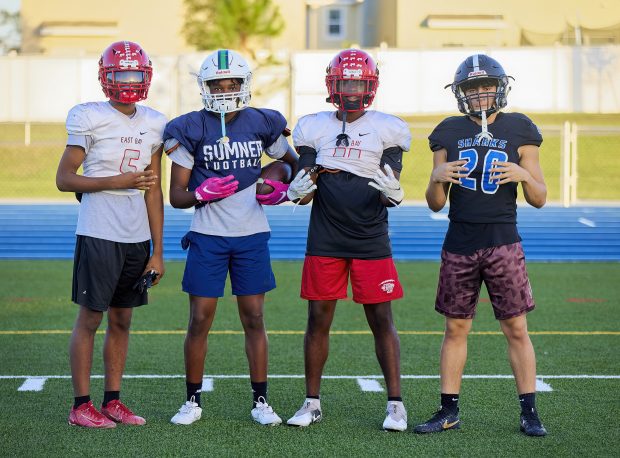 With the scoreboard blinking the 7-7 score and no time on the regulation game clock, both squads remained on the sidelines, ready for an overtime period. However, all they would get was a kind kiss on the cheek of their sister.
The prohibition against blitzes did contribute to not much offensive thrust by either side. But in a game in which the East grabbed an early 7-0 lead, it was more a case of intermittent rain and a lack of offensive coordination, which shackled both squads’ offense, not to mention the play of the defensive stars on both East and West.
As part of the 45-player East contingent, 14 South Shore gridiron players were on hand to represent the five high schools from the southeastern niche of Hillsborough County. Adding more South Shore flavor, the head coach of the surprising Sumner High 6A football team and his entire coaching staff provided the leadership for the East All Stars. Sumner’s Coach Alonzo Ashwood practiced all week long at Sumner in preparation for the classic Monday night match-up at Hillsborough High. 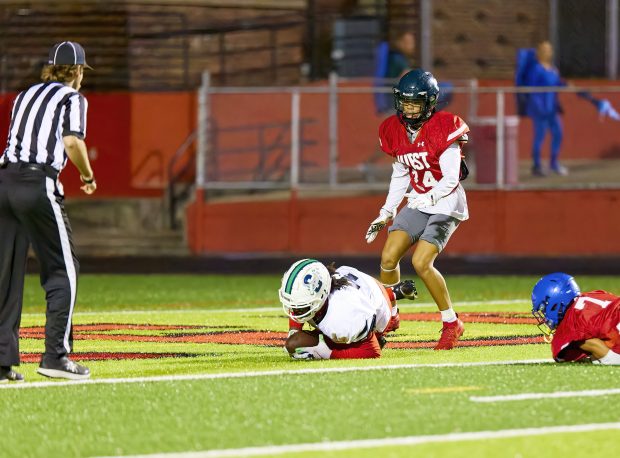 Sumner WR A.J. Haugabook with the first TD for the East squad

East All Stars from the South Shore included Amari Christi and Najee Dade of Spoto, Jeremiah Exceus, A.J. Haugabook, Ed Ghent, Cristen Casanova, Dante Hernandez of Sumner, Trent Cherry and Anthony Williams of East Bay, Braylon Henry, HaKeem Monroe, and Jacob Treese of Lennard and George Serra and Jaden Jiminez of Riverview.
The East registered its only score when Sumner tight end A.J. Haugabook grabbed a scoring toss from quarterback Carson Mohler of Wharton High. East defensive back Trent Cherry, named the top defensive player of the game, grabbed an interception in the opening half that helped keep the West offense scoreless in the opening half and for most of the game.
Forty-five players represented each side of the county, and points came at a premium on a cool night that included a few rain drops. The scoring began when East quarterback Carson Mohler found Sumner tight end A.J. Haugabook, and the connection ended up being the only points of the first half. Defensively, the East got an interception by East Bay defensive back Trent Cherry and a sack by Bloomingdale’s Jackson Sykes. 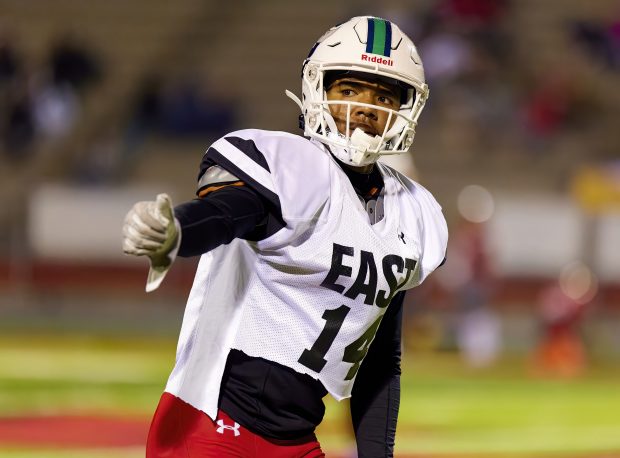 Sumner East All-Star Ed Ghent checking in for the offense

The West began to find more success offensively in the second half, but scoring remained a challenge. East defensive back Amarie Christie of Spoto stopped a West offensive drive halfway in the third quarter with a key interception in the end zone. The West nearly dented the scoreboard later in the quarter, but missed a field goal. The East hung on to a precarious 7-0 lead. The West defense kept it a one-score game on the East’s ensuing drive when Sickles’ Jondel Rivera broke up a fourth-down deep ball in the end zone.
Hoping to lock up a win, quarterback Marcus Miguele of Durant moved the East to the 50-yard line, but Jefferson’s Mikol Mackey picked an interception that provided the West one last attempt. The West quarterback, Elijah Rhoden of Alonso, had some last minute magic. With the clock ticking, Rhoden dashed to the East 21. Following two unsuccessful plays, Rhoden scrambled in the pocket and hit Steinbrenner receiver Jayden Davis near the West sideline. Davis eluded one would-be tackler, outran two others and leaped across the goal line with 30 seconds on the game clock. Robinson kicker Gunnar Gibson booted the tying point to make it 7-7. 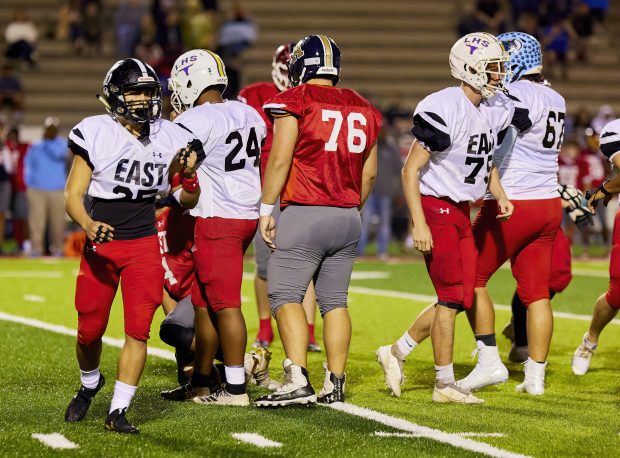 South Shore players from Lennard and Riverview come off the field after making a play.

The East took the West’s ensuing kickoff and desperately tried to win from poor field position. West tacklers almost had East QB Miguele for a safety in the end zone, but Miguele heaved an incomplete pass at the final buzzer. Overtime was on the players’ minds, but a small restriction limited the game to regulation time.

Discarded or repurposed, what’s next for your live Christmas tree