If you’re one who appreciates cars and trucks from the present to days past, you won’t want to miss the Shade-Tree Cruise-in Jan. 16. The laid-back, Sunday event will take place from 1 to 4 p.m. at South Bay Plaza, 761 Cortaro Drive.
Batteries Plus has partnered with the Roamin’ Oldies Car Club to bring this fun, free event to folks in Sun City Center and communities surrounding it. Around 100 vehicles are expected to be displayed, most of which will be owned by members of the Roamin’ Oldies Car Club. Other owners are invited to show their cars or trucks, as well. 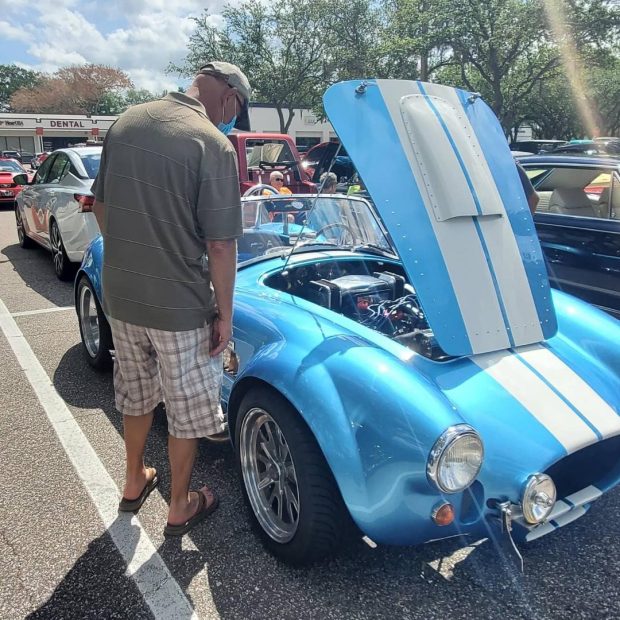 Visitors to the second Shade Tree Cruise-in on Jan. 16 will see classic cars like this 1966 Ford Cobra. Sponsored by Batteries Plus, the event is free to both participants and attendees.

“Anyone is welcome to register their vehicle,” said Don Novak, 62, manager of Batteries Plus and lifelong car enthusiast. “We’ll have everything from vintage and classic cars to future collectibles and brand-new vehicles, really anything the owner takes care and is proud of.”
“We had 96 when we held our first event last April,” said Novak, 62. “I’ll be bringing my 31-year-old Mazda Miata, and (Batteries Plus) owner Richard Epps, his ’69 Ford Mustang Mach I.
People come, pop up their vehicle’s hoods and let folks take a look, Novak continued. Some post lineage information on signs, while others set up chairs and tailgate the entire time. Still others walk around to enjoy the show, he said.
Batteries Plus supplies free water, hot dogs and chips to anyone who registers. Vehicles can be parked in a spot and set up starting at 9 a.m., and registration begins at noon. 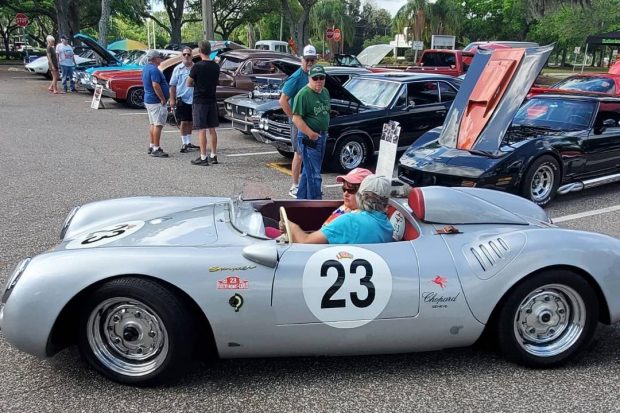 This Porsche 550 Spider was displayed in April at the first Batteries Plus Shade Tree Cruise-in. The next event on Jan. 16 will take place from 1 to 4 p.m. at the South Bay Plaza, 761 Cortaro Drive, and include everything from antique and classic cars and trucks to future collectibles and brand-new vehicles.

Batteries Plus will also present three awards: Car Owners Choice (voted on by participants), Staff Pick (selected by the Roamin’ Oldies Car Club president, Frank Gagliardi,) and Manager’s Choice (Don Novak). The club is supplying trophies and Batteries Plus, prizes to go with them.
What makes the event so enjoyable are the conversations that take place about cars, the stories behind the relationships owners build with their vehicles. Visitors and owners alike get tips on taking care of their vehicles and information on reputable body and repair shops handling classic cars.
There’s lots of nostalgia for many visitors. 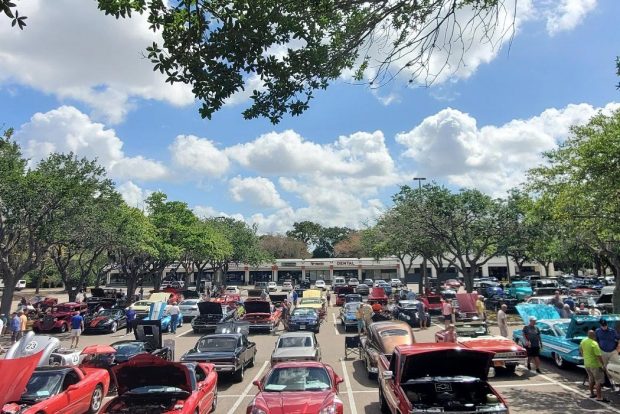 “I get to relive a little of my youth,” said Novak, who always attends the Roamin’ Oldies cruise-ins from 1 to 4 p.m. the first Sunday of every month at the MiraBay shopping center in Apollo Beach. “Sometimes it’s just the style and simplicity of a vehicle that’s fascinating,” Novak said. “Back in the day, there were no safety features. Cars were built based on whatever appealed to us, on what made them fun to drive.”
Novak said the store/company plans to continue hosting the event twice annually.
The Roamin’ Oldies Car Club will celebrate its 20th anniversary in 2022. A complete profile on the club will be written in late January or early February.
For further information on the Jan. 16 Shade Tree Cruise-in, call Novak at 386-295-5278 or Gagliardi at 856-373-8497. 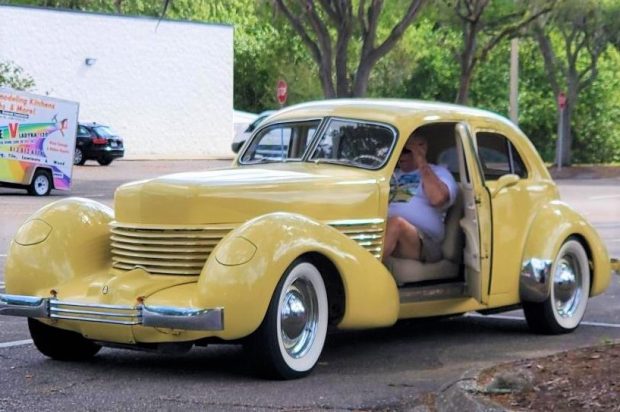 DON NOVAK PHOTOS
This Cord sedan, built in the 1930s, was way ahead of its time. Many of its features, like hidden headlamps, are seen in today’s vehicles. You just might see one, shown here at the Shade Tree Cruise-in in April, at the Jan. 16 event in Sun City Center.