‘Tis the season for manatee viewing and rallying around a bipartisan bill that aims to protect the gentle giant “sea cow” mammal known for its stout body and paddle-shaped tail.
Hillsborough County commissioners at their Dec. 8 meeting voted unanimously to support “in the strongest terms possible” HR 4946, a bipartisan bill known also as the “Manatee Protection Act of 2021.” Introduced by U.S. Rep. Vern Buchanan (R-FL-16), the bill in the 117th Congress would officially upgrade the West Indian manatee from “threatened” to “endangered” under the Endangered Species Act (ESA). It would require the U.S. Fish and Wildlife Service to refocus its attention on manatee population rehabilitation, while providing also for more federal funding and personnel in this regard.
The Florida Fish and Wildlife Conservation Commission (FWC) in November released a report confirming the highest number of manatee deaths in decades. As of Nov. 12, a recorded 1,003 manatees have died in Florida throughout 2021, a number that more than doubled from the 498 deaths at the same time last year.
The letter of support approved by Hillsborough County commissioners was drafted by Kimberly Overman.
“Florida is fortunate to be home to many unique wildlife species, including the state’s official marine mammal, the manatee,” Overman said in her letter. “Unfortunately, their survival is once again in question, and we have seen more than a thousand die this year.”
Among the reported factors leading to manatee deaths are the dramatic bout of red tide in the Gulf; habitat loss; watercraft collisions; and a significant loss of seagrass along the Atlantic coast, which leads to starvation.
“Hillsborough County recently enacted an ordinance banning the use of fertilizer during summer months, which should aid in combatting the algal blooms destroying our seagrass beds,” the approved Hillsborough letter reads. “However, the re-establishment of a heightened protection status will be invaluable in combating the continual and rising loss of these irreplaceable animals.”
Buchanan echoed a similar sentiment in announcing his bill in August.
“Manatees are beloved, iconic mammals in Florida,” Buchanan said. “This year’s record-breaking number of manatee deaths is staggering and extremely concerning, which is why upgrading their ESA status is absolutely critical. We must do everything we can to protect these gentle giants and Florida’s official marine mammal.”
South Hillsborough County residents have a unique opportunity to view the manatee in action, at the award-winning Manatee Viewing Center in Apollo Beach, which reopened Nov. 1 for its 35th season. The center’s 1.7-mile Tidal Walk Trail has been added to the annual Hillsborough County Hiking Spree for 2021-2022. Launched in 2016, the current spree features 26 trails at 22 locations. Participants who complete at least eight trails on the list between Nov. 1 and March 31 earn a patch, a medallion for a walking stick or a dog bandana.
The Manatee Viewing Center, a federally-designated manatee sanctuary, is part of the Florida Conservation and Technology Center, a project made possible through a public-private partnership between the Tampa Electric Co., The Florida Aquarium and the Florida Fish and Wildlife Conservation Commission. The Apollo Beach center, open through April 15, is at 6990 Dickman Road.
A migratory species, manatees roam throughout the United States and are “commonly found in coastal rivers, estuaries and canals,” according to the Tampa Electric Manatee Viewing Center online. “They move freely within salt, brackish and fresh water habitats, often in water less than six-feet deep, where underwater vegetation is most abundant.” Scientists estimate there are 6,000 manatees left in Florida.
The Tidal Walk Trail, which begins at the center’s 900-foot boardwalk, affords “an ideal vantage point” for observing manatees congregating in the discharge canal, according to county officials. “These gentle giants of the sea return to this spot each year during cooler winter months to enjoy clean, warm water that is circulated back into the bay from the Big Bend power station.”
Viewing center officials say the West Indian manatee, the subject of Buchanan’s bill, is believed to have evolved from a four-footed, plant-eating land mammal more than 60 million years ago. Its closest modern land relatives are the elephant, hyrax and aardvark.
Buchanan’s bipartisan bill as of Dec. 7 had 24 co-sponsors (12 Democrats and 12 Republicans), all but five of whom represent Florida districts. Florida U.S. Rep. Darren Soto (D-9) is the bill’s co-sponsor. Also in support are Florida U.S. House representatives Daniel Webster (R-11), Mario Diaz-Balart (R-25), Scott Franklin (R-15), Matt Gaetz (R-1) and Brian Mast (R-18), all of whom declared their intentions Dec. 7. Rounding out the list of Florida supporters are U.S. Reps. Frederica Wilson (D-24), Val Demings (D-10), Carlos Gimenez (R-26), Al Lawson (D-5), Gus Bilirakis (R-12), Kathy Castor (D-14), Charlie Crist (D-13), Theodore Deutch (D-22), Maria Salazar (R-27), Lois Frankel (D-21), Michael Waltz (R-6), Byron Donalds (R-19) and John Rutherford (R-4). 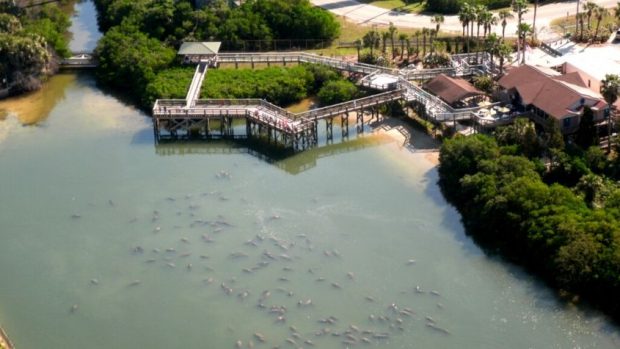 For more on the Manatee Viewing Center in Apollo Beach, visit https://www.tampaelectric.com/company/mvc/. To register and download the 2022 Hillsborough County Hiking Spree printable trail list, visit www.HCFLGov.net and search for “hiking spree.” To track the status of HR 4946, visit https://www.govtrack.us/congress/bills/117/hr4946/. For manatee facts and tips for helping them, visit the Florida Fish and Wildlife Conservation Commission at www.myfwc.com and search for manatees. To report injured, orphaned, entangled, distressed or dead manatees, call the Wildlife Alert Hotline at 888-404-3922.