High school football comes to a grand conclusion in the next five days, after players and coaches have been grinding it out in practices and games since early August.
The last whistle blows this Monday, Dec. 20, for the annual East-West All Star football game. Players and coaches have been selected for fans final view of the 2021 version of the gridiron sweepstakes. The game is free to all spectators at Hillsborough High Stadium, starting at 6 p.m., but parking will cost you $5. 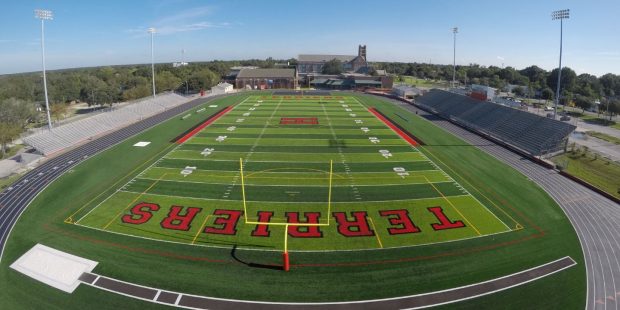 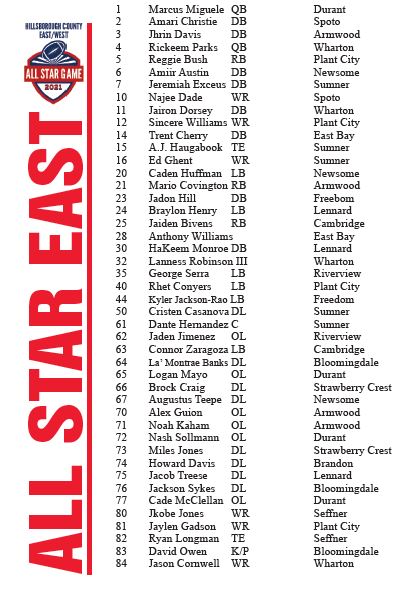 The regular season will conclude with state championship finals in the FHSAA at Ft. Lauderdale this weekend. Unbeaten Tampa Bay Tech tangles with St. Thomas Aquinas of Ft. Lauderdale on Dec. 17 at 7 p.m. for the state crown in 7A. Championships in 8A and 6A will be decided the next day, also at Ft. Lauderdale. In a 1 p.m. contest, the 13-1 Venice High Indians square off with the12-2 Apopka Blue Darters for the championship of 8A. Jesuit of Tampa puts its perfect record of 14-0 up against 12-1 Pine Forest High of Pensacola for the top spot in 6A at 7 p.m.
After those state crowns are claimed, the curtain comes down on prep football at Hillsborough High Stadium, which features a new artificial turf, installed by the Hillsborough School District in May 2020 at a cost of $1.8 million. The game itself is sponsored by the Hillsborough School District and the Tampa Bay Sports Commission.
The five South Shore high schools will be well represented on the East team. Head Coach of the 45-person East squad is Alonzo Ashwood of Sumner High. He is joined by his entire coaching staff as assistants. Practices are open to the public all this week from 4:30 to 6:30 p.m. at Sumner High.
Fourteen players from South Shore schools have been selected for the East. Players and coaches were selected for both squads by the Hillsborough County football coaches.
The Tampa Bay Sports Commission is a private, non-profit, 501(c)3, charitable corporation that serves the entire Tampa Bay area as the lead organization for bidding on and hosting premier sports and entertainment events. The TBSC’s mission is creating and developing social and economic impact throughout the Tampa Bay region.
The Tampa Bay Sports Commission works to unite all interests in the Bay Area under one full-service approach that provides leadership and guidance for the benefit of all parties involved in the bidding and hosting process. Working in partnership with Visit Tampa Bay, the county’s convention and visitors bureau, the TBSC provides a one-stop shop for all interested parties looking to bring their event to the Tampa Bay region.