From the youngest of extras dancing as soldiers and angels, to the ballerinas bringing a professional touch to their roles as the Sugar Plum and Dew Drop fairies, the magic of The Nutcracker came to life once again on stage at Riverview High School. 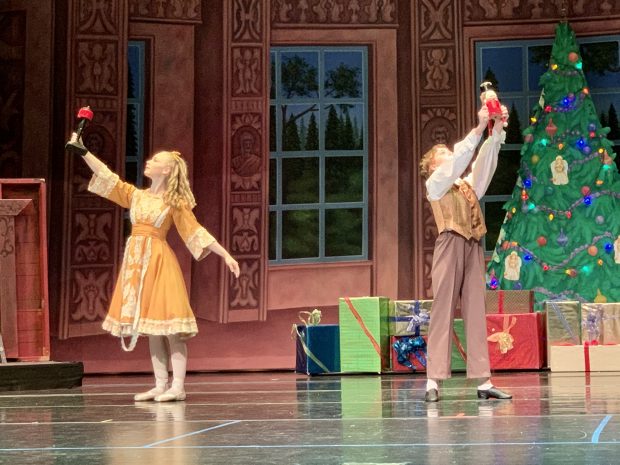 A scene from The Nutcracker shows what happens after the character Fritz Stahlbaum taunts his sister Clara and her prized nutcracker breaks in two.

Performances Dec. 11 and 12 marked the 28th year for the Brandon Ballet performance of The Nutcracker, and company founder Alice Holden Bock has been leading them all, for many years as the artistic director and always as the force behind the scenes.
“The Nutcracker is not only a tradition for the people coming out to the performances but also for the performers on the stage,” Bock said. “When you come to the ballet every year, you get to enjoy the score, and there’s always one part of The Nutcracker that someone likes especially, and everybody likes something different.” 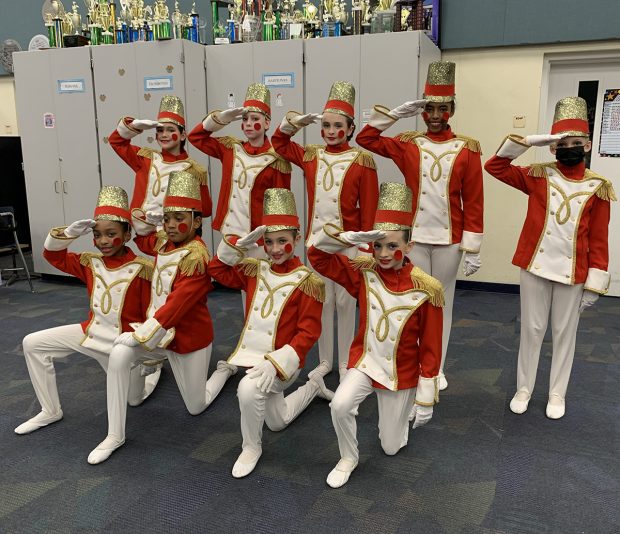 Backstage at The Nutcracker at Riverview High, staged by the Brandon Ballet, soldiers get in costume and formation.

That passion for ballet — and for giving local residents a company of their own to enjoy performances at a convenient location and affordable cost — is what drew Bock to founding the Brandon Ballet, for which she serves now as its executive director. In residence at The Dance Center, the company draws its professional, pre-professional and training dancers from throughout southeastern Hillsborough County and beyond.
“My passion for dance is tremendous,” said Bock, who trained extensively with Bill Martin-Viscount at the Southwest Ballet Center in Arlington, Texas, and the American Ballet Theatre. Her credits include performances with the Joffrey Ballet and Bay Ballet Theater and as a choreographer for regional dance companies throughout Florida. “I want as many people and children to enjoy the art of dance as possible,” Bock said. 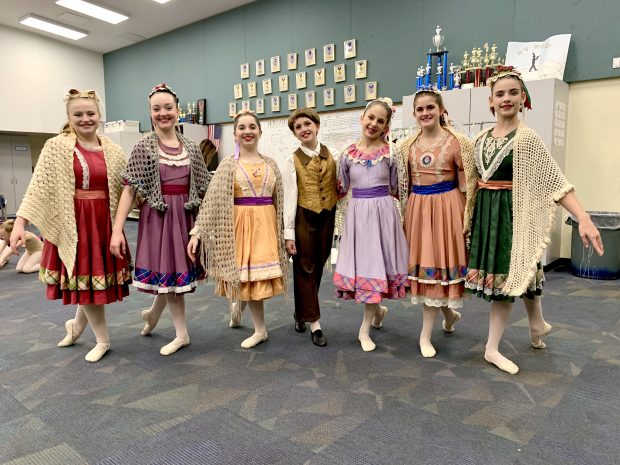 Backstage at The Nutcracker at Riverview High, staged by the Brandon Ballet, party girls get in costume and formation

Sharing in that mission is Doricha Sales, who since 2017 has been the company’s artistic director.
“I think it’s absolutely incredible that Alice has kept a professional company going for 28 years in Brandon,” Sales said. “It’s not easy to do in a big city, so to do it in a community such as this is huge, and this community is very supportive of the Brandon Ballet and Alice’s efforts.”
For Sales, this year marks her 45th year associated with The Nutcracker ballet, which she first performed as a four-year-old dancer with the Boston Ballet.
“That was my first contract job,” said Sales, who was a professor of ballet at Indiana University before moving to Florida in 2014. “I used to perform 52 shows every year, so to hear The Nutcracker music this time of the year brings me complete peace and makes me happy. I get so excited when it’s time to bring The Nutcracker to life again.”
As for the ballet’s universal appeal, “I think it’s the traditional aspect of the ballet that always is a draw,” Sales said. “It’s always proper and correct but at the same time it’s always evolving, which is what I learned, that dance, when it’s done well, is a reflection of society.”

As for this year’s evolving touch, Sales noted that this year Uncle Drosselmeyer was played by a female dancer.
As for its history, The Nutcracker debuted in 1892 at the Mariinsky Theatre in St. Petersburg, Russia. Mastermind musician Marius Petipa commissioned Peter Tchaikovsky to compose the beloved score, based on Alexandre Dumas’s adaptation of E.T.A. Hoffman’s tale, “The Nutcracker and the Mouse King.”
The ballet’s first staging in America came 53 years later, performed by the San Francisco Opera Ballet in 1944. Some 50 years after that the Brandon Ballet staged its first production.
This year’s staging includes 21-year-old professional dancer Sarah Dionaldo, as the Dew Drop Fairy (among other roles), and fourth-grader Samantha Higginbottom, as a soldier.
“I just like the magic of the ballet,” Dionaldo said., “just seeing the looks on the little kids’ faces watching the dancers and seeing the magic of the stage construction, costumes and sets.”
“Every time I see The Nutcracker it’s just so magical, and it always changes just a little bit,” said Higginbotham, bearing witness to Dionaldo’s assessment. “I just like to be able to stage it every year, even during the pandemic, which was my first year with the Brandon Ballet.”
In keeping with pandemic protocols, last year’s performance of The Nutcracker was held on an outdoor stage at Overflow Church in Valrico. This year, the company, turning The Dance Center studio into a black box theater, staged virtual productions of The Agony and the Ecstasy, act two of Giselle, the romantic ballet Pacquita and Omni Metamorphosis, by New York artist choreographer Marquis Floyd, who hails from St. Petersburg, Florida.
Giving an avenue for emerging artists to find a footprint in local ballet and theater is a goal for both Bock and Sales, as is the case in this year’s Nutcracker for the Arabian dancers, played by Shawn Cusseaux and his high school classmate, Sara Eisenbaum. Cusseaux graduated from the Pinellas County Center for the Arts at Gibbs High School and is now with Ballet X, which Sales said is one of the top three contemporary ballet companies in the nation.
Again, it was Bock’s dream to give emerging dancers a chance to shine on the local stage, both as training dancers and later as professional artists. 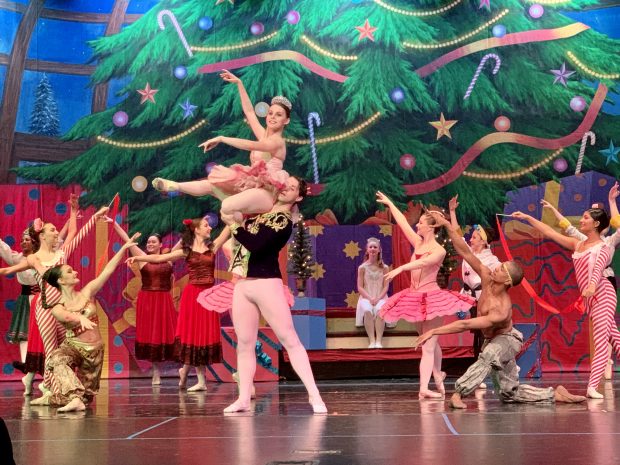 A scene from The Nutcracker, staged by the Brandon Ballet at Riverview High, shot during the Dec. 11 dress rehearsal

“The Brandon Ballet needs continued support from the community, and it needs to keep building its audiences,” Sales said. “We need people to keep loving our organization and to understand that we have great young dancers, right here in our hometown, who are growing into little young artists.”
Toward that end, the company hosted its annual “Sugar Plum Fairy Tea Party” at The Regent earlier this year and plans to follow with a “Princess Tea” on March 27, also at The Regent. The cost is $17.50 and tickets (which sell out quickly) are set to go on sale in January. For more information about the tea and Brandon Ballet performances and auditions, visit: www.brandonballet.org or email: www.dance@brandonballet.org/. The Dance Center is at 161 East Bloomingdale Ave., Brandon, just 2 miles east of The Regent and the Winthrop community in Riverview. Call: 813-684-4282.