Home Headlines You’re not a winner; you don’t owe money; he doesn’t love you
HeadlinesNews

You’re not a winner; you don’t owe money; he doesn’t love you

Real-life grinches are among us in force this holiday season, and they want to steal our money. And they’re not content to get some of it; they want it all.

Community Resource Deputy Jeff Merry, of the Hillsborough Sheriff’s Office, is warning South Shore area residents, and especially the elderly, not to communicate in any form with people they don’t know.
“Scams are running amok right now in Sun City Center, and it’s only going to get worse through the holidays,” Merry said. “The big ones right now are the romance scam and the sweepstakes scam.”
Romance scams take place online. A criminal creates a fake identity and then contacts you to start a friendship. Over time, he gradually gains your trust and affection, creating the illusion of a romantic relationship to manipulate you into sending him (or her) money.
In a sweepstakes scam, a criminal calls, emails or sends you a letter saying you won a large amount of money in a sweepstakes and then asks you to send money to cover taxes and various fees. If you respond, the scammer has your money, you’ll never get it back and you’ll find out at some point you didn’t win anything.
Here are some examples:
Merry recently learned about an 87-year-old woman who was buying bitcoin to pay for taxes and fees on a $22 million purse she was told she’d won in a Publisher’s Clearing House sweepstakes. When he went to tell her it was a scam, he found out she’d sent the criminal $60,000 over four weeks.
In another scam, a Kings Point resident wired $6,000 to someone in Jamaica who claimed her daughter was supposedly stuck at a Sandals resort and needed money to fly home. Merry had the woman call her daughter, who was actually safe at home.
IT GETS WORSE
An active Sun City Center couple in their mid-80s received an official-looking letter from “Publisher’s Clearing House” with a phone number to call regarding a $22 million prize and a new Mercedes. Hoping to collect their winnings, the pair sent $700,000 in taxes, fees and delivery costs over the course of three years.
They emptied several investment accounts, maxed out credit cards, took out a first mortgage on the home they already owned, then sold it and sent the proceeds to the scammer. Ultimately, the crook sent them a small safe, which supposedly held $250,000 in cash as a partial payment of their winnings. They were told they needed to send more money to get the combination and that the safe would blow up if they tried to break into it.
Knowing it was a swindle, Merry cracked the safe open to find only a King James Bible inside.
“It was gut wrenching sitting across from them and listening to how they are now financially ruined,” Merry said. “I think they felt they were so far into it, they needed to see it through.”
Romance scams recently devastated two local woman.
One of them was contacted on social media last April by a man who claimed he was an Iraq War veteran and now worked as a civilian contractor for the United Nations. He claimed he was the friend of a friend.
She responded and, over a period of time, felt the two of them had developed a more intimate relationship. The scammer began asking the woman to move her own money as a loan to help him with his business dealings. He told her he didn’t have access to his money in Iraq.
He sent her fake articles of incorporation and a copy of a fake wire transfer he claimed he tried to make to her to pay back the loan, but customs had stopped it since it was coming from overseas.
The scam involved her sending payments on his behalf to different “companies” he dealt with, which were actually money mules, previous victims who actually helped him perpetrate the crime in order to recoup some of their losses.
Believing the man was in love with her, the woman sent $835,000 in various transactions. Merry was advised of the situation and went to see her. He said she had two cashier’s checks in her possession and was ready to send another $135,000. Fortunately, he stopped her from going through with it and watched her re-deposit the money in the bank.
“Her heart hurts worse than her wallet,” Merry said. “And she’s now grieving the loss of a relationship she never really had.”
In another recent romance scam, a woman was contacted by a “doctor” who lived overseas and needed money to help support his charitable practice. When he promised he’d purchase a home for them to live in together, she sold her home her in Sun City Center and sent him the proceeds. 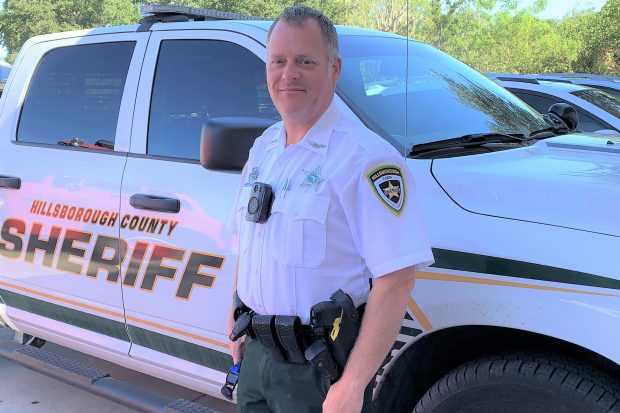 LOIS KINDLE PHOTO
Community Resource Deputy Jeff Merry, of the Hillsborough County Sheriff’s Office, is warning South Shore area residents, and especially the elderly, not to communicate in any form with people they don’t know. Scams are increasing in the area over the holidays.

More than $500,000 later, she’s living in her car and still believes the man is her soulmate.
BE MORE SKEPTICAL
Criminals will send you emails, call over the phone or write you letters and social media messages trying to draw you into their nefarious schemes. They’ll convincingly pose as representatives of your bank or investment firm, the IRS, law enforcement, a health care provider or even a grandchild to part you from your hard-earned money, promising legal action against you, assistance with a problem that doesn’t exist or, in the case of fake sweepstakes, large sums of money. All you need do is follow their instructions.
IF YOU DO, YOU’LL REGRET IT.
If you believe you or someone you know is being victimized by a scam or you’re contacted by someone you suspect is a scammer, call Merry at 813-242-5515.