Toys for Tots get huge donation from talented SCC woodworkers

We need a bigger toy box! Members of the Sawdust Engineers of Sun City Center have been working all year to create toys for needy children at Christmas. On November 22, Robert Blake and Todd Lee delivered 105 of those works of love to a collection point in Sun City Center—the South Hillsborough Chamber of Commerce.
The Marine Toys for Tots Program has been ongoing since 1947. According to the program’s web site, it was created by U.S. Marine Corps Reserve Major Bill Hendricks. When his wife Diane wanted to donate some handcrafted dolls at Christmas, she asked Bill to deliver them to an agency that supports children in need. When Bill reported back that he could not find such an organization, she instructed him to “start one!” His community effort to collect toys was so successful that the commandant transformed it into a national community action program the following year. Presently, the program distributes an average of 18 million toys to seven million children annually.
Blake, a three-year club member—is passionate about the Christmas toy program. It was his brainchild in 2020 when he set a goal of 50 toys. He and Club President Jeff Huisinga are deservedly proud of their 266 members. They rose to that challenge and then exceeded the doubled target of 100 this year. In 2022, they are aiming higher—150.
Lynne Conlan, the chamber’s executive director, was impressed last year, but this year she was overwhelmed at the sheer quantity of toys spread over her lobby floor. The chamber is a drop-off for other organizations as well, so she expects the lobby to be filled over the next few weeks. “It makes me happy to see so many people giving,” she said. “Rather than boxing the toys up, we leave them out to inspire others.” 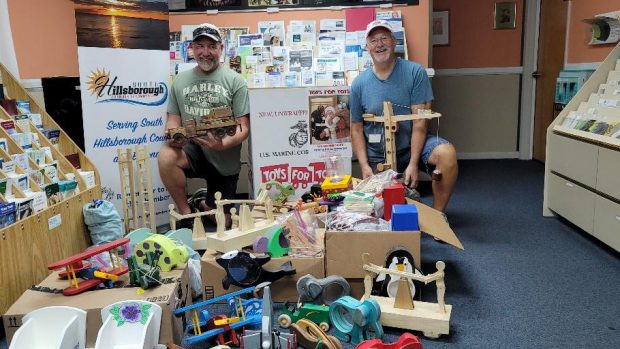 Phyllis Hodges Photo
Doll cribs, cranes, cars, trucks, trains, planes, dinosaur puzzles. You name it—chances are it’s there in the 105 toys lovingly made by members of the Sawdust Engineers of SCC for the Marine Toys for Tots. Robert Blake (L) and Todd Lee delivered the collection to the South Hillsborough Chamber of Commerce.

The Sawdust Engineers have an impressive workshop on the SCC Community Association Central Campus, North Pebble Beach Boulevard, and, usually, have a special project going for a non-profit organization. They also have several ongoing programs. In addition to the toys, they 1) operate a gift shop, featuring items of exotic and native woods such as cutting boards, bowls, games, etc.; 2) support schools by allowing teachers to select teaching aids for their students, or they can request a special project needed for their classroom—free; 3) build wood wheelchair ramps for SCC residents to assist with access to their home—free; 4) create wood urns for deceased veterans and flag display cases for veterans—free.
Sawdust Engineers is a not-for-profit SCC Community Association club. It’s stated purpose is to use members’ woodworking skills to support local groups and organizations. To maintain the workshop, they rely on donations and sales of items in the gift shop or at special CA events. Hours of operation are Monday through Friday, 8 a.m. to 3 p.m., and Saturday, 8 a.m. to noon.