Nine decades of life have not diminished the deftness of his fingers as they dance across the 12 strings of his mandolin, an instrument William “Bob” San Juan picked up as a young man entering the U.S. Coast Guard at age 17.
Likewise for his three brothers, Vincent, Pedro and Ramon, who, also, upon turning 17, joined the Coast Guard and received from their father the gift of the mandolin before heading out to sea. The elder San Juan, along with his four sons, was a career guardsman. 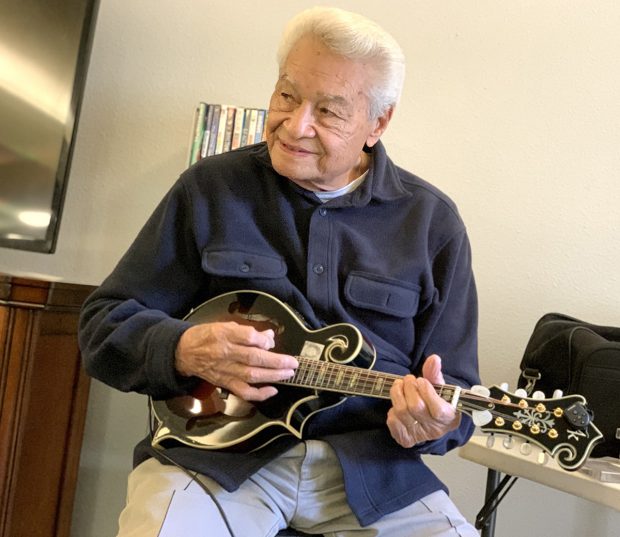 Collectively, that amounts to more than 300 years of mandolin playing and 130 years of service in the U.S. Coast Guard, from which each of the four San Juan men retired as an officer.
Now, it’s a mission for Christine Mancini to document with a Coast Guard historian the unique San Juan story of generational service as well as to celebrate her father’s 90th birthday last October with a tribute to his life of service, volunteerism and music.
“His humility is the first thing that comes to mind,” Mancini said. “He has a big heart and a heart for service. He’s done so much for family, friends and strangers.” 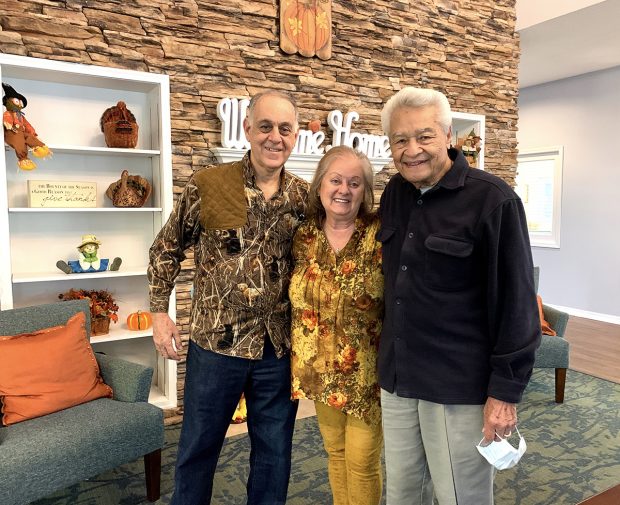 LINDA CHION KENNEY Photo
Christine Mancini with her husband and father, William “Bob” San Juan, whose life of service and volunteerism she paid tribute to as the mandolier celebrated his 90th birthday in October.

That was on display last month at Rosecastle Delaney Creek in Brandon, where Bob San Juan pulled out his mandolin and played patriotic and holiday music, followed by a little bit of country, for the residents of the assisted living facility. He also plays polka, Italian medleys and old songs from the 40’s on up.
“He has a love for family, life, for God and for country,” Mancini said. “My father often says. ‘If I can make one person smile before I leave this planet, it’s worth it.’ For sure he has touched thousands of people, including during his 32 years living in Key West, where he was known as the ‘Key West Mandolier.’ ” 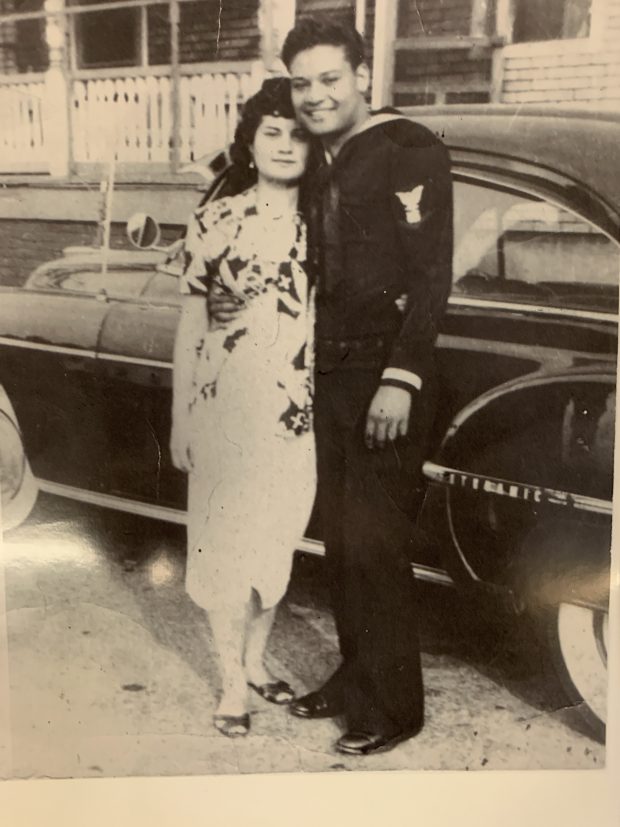 COURTESY PHOTO
Married for 68 years, Juanita and William “Bob” San Juan met at The Lighthouse Café near the Portsmouth Naval Shipyard in Virginia.

Her father’s Coast Guard career included many stops along the way, including officer-in-charge positions in Long Beach, California; Portsmouth, Virginia; Ocean City, Maryland; and the Chatham Lighthouse on the Cape Cod coast in Massachusetts. That was his last position with the Coast Guard, before which he had served in Vietnam. For his service there, he received many medals and commendations, including both the Bronze Star and Purple Heart.
Volunteerism, as well, is not unfamiliar territory for San Juan, who plays locally for no charge at nursing homes, church fundraising functions, birthday parties, anniversaries and more. For years he performed for the residents at the Hawthorne Center for Rehabilitation and Healing in Brandon, where his wife, Juanita, resided before her death in February 2019.
“I wish I could live long enough to write the story about my mother’s and father’s romance,” Mancini said. Her title would be, “The Lighthouse Café,” because that is where her parents met, mother on the job and father stepping in for a little rest and relaxation after his guardsmen duties at the nearby Portsmouth Naval Shipyard in Virginia.
“She could have had the pick of the crop,” Mancini said. “One night dad walked in, their eyes met and he told her, ‘I’m going to marry you.’ ”It was a promise that would cement a 68-year marriage, raising three children, with many assignments and relocations, and then living up to the promise that in sickness and in health the bond would not break. San Juan, upon his retirement from the Coast Guard, lived in Key West for 32 years, where he attended Key West Community College and ranked at the top of his class. After college he went back to work as a major, overseeing security at the Boca Chica Naval Air Station. He retired for good when he took on his most important job, tending to the needs of his wife as her illness advanced.
“Taking care of mom was the most difficult battle he ever endured,” Mancini said. “We used to say, ‘You survived the Vietnam War; we’re not sure you’re going to survive taking care of Mama.’ But he did, and their last words to each other were, ‘I love you.’ ” 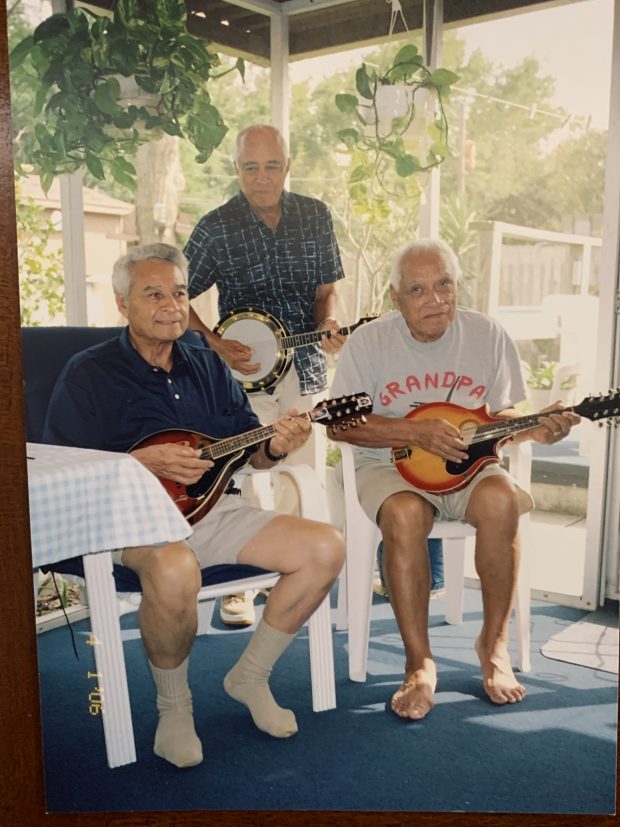 San Juan family members play the mandolin, a passion shared among a father and his four sons.

Mancini recounted as well her mother’s dying wish.
“Before she died, she said to me, ‘Please make sure your father continues to play his music,’ ” Mancini said. “She loved to hear his music, and she knew how much it meant to him to be a mandolier.”
Described as an “old world instrument” from the lute family, the mandolin was the instrument of choice for the elder Vincento San Juan. His children would hear him play, and as young men deep in their careers and on leave, they would meet together at family gatherings, a quartet of musicians bonded by family and the love of music.
“I remember everybody being so joyful and singing,” Mancini said. “Sometimes we’d have a pair of maracas, a tambourine, a guitar and a ukulele joining in. It was very much a musical family.”
One of Mancini’s favorite photographs is of her father and her three uncles, dressed in full uniform at their father’s funeral in 1967. Four men, who as boys would often eat Sunday dinner aboard their father’s ship and who never doubted when it came time to serve that they, too, would sign up to become guardsmen.
It’s a legacy captured in the elder San Juan’s funeral program, which noted “San Juan’s tales of travel and his adventures, the gifts to the family from faraway places, his neatness and sternness, his respect for his uniform, the medals he received for service.”
As for following in their father’s footsteps, the program made it clear, that for all the San Juan men, “the lure of the sea was strong.”
Father and sons hold in common two things. They each retired as long-serving Coast Guard officers and each of them continued to play the mandolin long after their active duty ended. The three remaining brothers, Pedro, Ramon and Bob continue to play, at age 96, 91 and 90, respectively.
“The mandolin is the invisible musical ribbon that ties everybody together,” Mancini said. “In my mind’s eye, you have this giant bow that keeps everybody tied up together in a nice neat package.”

You’re not a winner; you don’t owe money; he doesn’t love you