The South Hillsborough Chamber of Commerce will once again bring Christmas cheer to seniors who have limited or no contact with family members during the holidays.
The recipients will be residents of assisted living, skilled nursing or memory care facilities in Sun City Center who possibly wouldn’t get a gift from Santa, said Connie Lesko, the chamber’s Ambassador Committee chairwoman. She and Sarah Baez are coordinating this year’s effort with help from the other chamber ambassadors.
But they’re only part of the equation. The public makes Giving Tree possible.
Residents who’d like to help are asked to take a tag from the chamber’s holiday Giving Tree and purchase items for the man or woman whose first name is listed on it. They’ll learn a bit about the prospective recipient and receive a suggested gift list of inexpensive items, including things like hand or body lotion, after shave, large-piece puzzles, coloring books, snacks and socks.
If they choose, folks can get creative with their donations. Last year, many turned in lap blankets, homemade throw pillows, sweaters, vests, watches and shawls. These can be wrapped, if desired; however, the chamber needs a tag or note attached regarding what’s inside and whether it’s for a man or a woman.
Unwrapped donations are welcome, as well. Chamber ambassadors and volunteers will be happy to act as Santa’s elves and wrap packages individually or place the items in gift bags. Every recipient gets multiple gifts, Lesko said.
Gifts must be received by the chamber no later than Dec. 17. They will be distributed Dec. 21 or 22.
Last year’s Giving Tree was a huge success.
“We were blown away by the response we received to our first one,” said Lesko. “People in the area are so generous. It’s such a giving community.”
Lesko noted an anonymous donor in 2020 brought in two cases of lap blankets and two cases of moisturizer. His generosity was spurred by the recognition that he himself might need such services one day.
Laurie Simpson, sales director for Belvedere Commons, said about half its residents benefited last year.
Each of them had a very personal reason for being on the recipient list,” she said, noting it doesn’t necessarily mean they’ve been abandoned by those who love them. “The gifts they received from the community were amazing and so appreciated.”
Simpson said those recipients were ages 80 and older, and most used walkers or wheelchairs.
Jennifer Petit, activities director for Sun City Senior Living (Pacifica), had similar comments.
“Anything we received was greatly appreciated by our residents,” she said. “It really helped them get into the spirit of the holiday season and feel unconditionally loved.”
Those who gave their time and efforts working behind the scenes actually felt they were recipients, too.
Brian Bower, a financial advisor with Edward Jones, was among them. He provided use of his truck as Santa’s sleigh, delivering all of the packages to various participating Sun City Center facilities.
“Everyone came together to fill the back of my truck with gifts for these elderly residents, and it was such a great feeling being able to deliver them,” Bower said. “I’ll definitely be doing it again this year.” 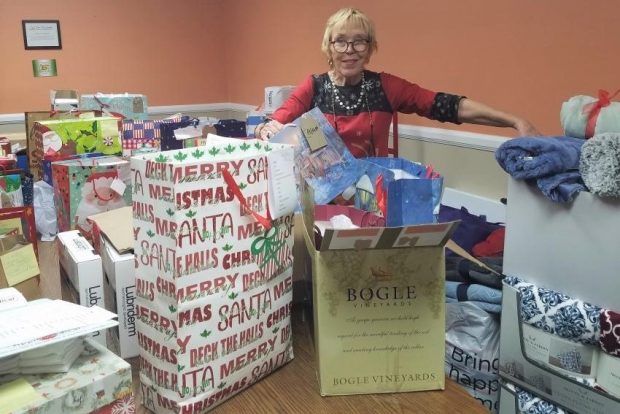 OBSERVER NEWS FILE PHOTO
Lynne Conlan, executive director/South Hillsborough Chamber of Commerce, is shown here among a portion of the Christmas gifts the community donated during last year’s Giving Tree for seniors in facilities who might not have otherwise received anything. This year’s collection is now underway. For information, call 813-634-5111.

Thus far, the following facilities are participating – Belvedere Commons, Palm Gardens, Sun City Senior Living, Cypress Creek Assisted Living, Plaza West, Aston Gardens Assisted Living and Memory Care.
Any others who’d like to be added should reach out immediately to the chamber at 813-634-5111 or to Lesko at 813-927-1147.
Anyone with questions about the Giving Tree or in need of additional information can call these same numbers.