When Catherine “Missy” Lennard was set to graduate from the University of Central Florida with a degree in education, she had a difficult choice to make, stay and teach in Orlando or come back home to Hillsborough County.
Her father, Earl Lennard, who entered the Hillsborough County school district as a first-grader and retired almost 60 years later as its superintendent of schools, would listen as his daughter weighed her options, then offered a bit of his own sage advice.
“He told me, ‘Sometimes you have to give back to the community that gave you so much,’ ” Lennard said. “That’s when I decided to come home, and I was very lucky to be hired at Cypress Creek Elementary School in Ruskin by principal Joe Green.” 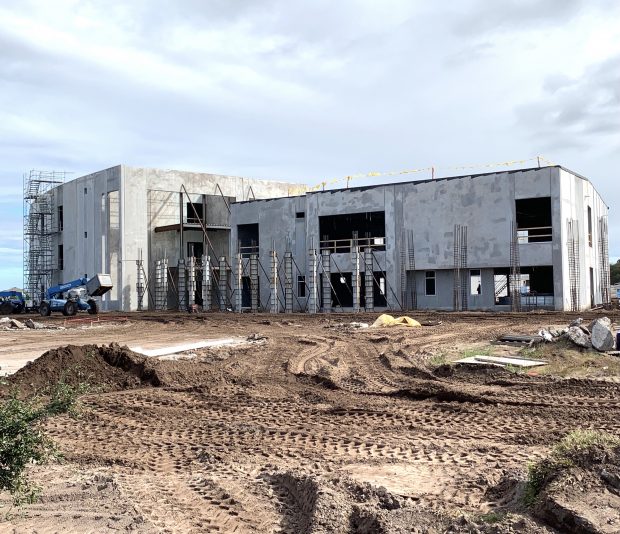 Linda Chion Kenney
Under construction in Newland’s Waterset master-planned community in Apollo Beach is a PK-8 school set to open in August.

Today, Lennard is set to become the inaugural principal of the still unnamed PK-8 school in Waterset, a master-planned Newland community in Apollo Beach, across the street and down the road from Eisenhower Middle School and East Bay High in Gibsonton, where Lennard graduated from in 1988 and her father both interned and taught.
The 1,600-student Waterset magnet school, with enrollment by choice, is set to open in August for the start of the 2022-23 academic year. As a so-called innovation academy, plans for Waterset call for an International Baccalaureate program and STEAM focus, which blends science, technology, engineering and mathematics with the arts.
Lennard brings to her job a lifetime of education and community sensibilities, learning as much from her father and mother, Earl and Annabel Lennard, about education as she did farming, raising cows and participating in spiritual and community life. Earl Lennard, the namesake of Lennard High in Ruskin, died in 2019 after a long illness.
“What I’m most excited about is being back in south Hillsborough County where I’m from and where I can engage and rally the community, its stakeholders and local businesses to create partnerships with their school,” Lennard said.
She brings to the task a wealth of relevant experience, having opened Richard Stowers Elementary School in Lithia as its inaugural principal. Before that, she helped open Symmes Elementary School in Riverview as its inaugural assistant principal in 2001. In between, Lennard was principal at Mintz Elementary in Brandon.
Stowers Elementary, like the emerging Waterset PK-8 school, sits in a highly successful master-planned Newland community. Lennard said it is “bittersweet” to leave the school in FishHawk, named for one of her father’s and her family’s dearest friends.
“This is definitely a very difficult decision to leave Stowers and the wonderful families, kids and community stakeholders who make Stowers the great place that it is,” Lennard said.
Lennard will officially take over her new duties in February and was at the Waterset construction site last week to meet with the builders of the three-story school at 5995 Covington Gardens Drive. School officials describe Waterset as a school that will “engage students with an internationally-minded focus, fostering a love of education based on a hands-on, project-based approach to learning.”
How that evolves in good part will be up to Lennard, whose tasks will include hiring her first staff and cadre of teachers, along with setting the tone and culture for the traditions that follow. In the weeks ahead, school board members will decide on a school name and will consider the suggestions Lennard puts forth for both school colors and mascot, which she said she will decide with input from incoming students.
Until then, parents have until Dec. 11 to file their school choice applications for admittance to Waterset or to any other Hillsborough public school of choice. Lennard said she will be at Spoto High School on Dec. 1, from 5:30 to 7 p.m., for Magnet Exploration Night, hosted by Hillsborough County schools.
Meanwhile, Lennard has circled on her calendar an upcoming milestone for Stowers, which next year will mark its first group of students graduating from high school after starting their education careers as first-graders at Stowers.
“We’re looking forward to a big celebration for our inaugural class when they graduate this school year,” Lennard said. “Every year we include graduating high school seniors and former Stowers students at our fifth-grade clap-out on the last day of school.” 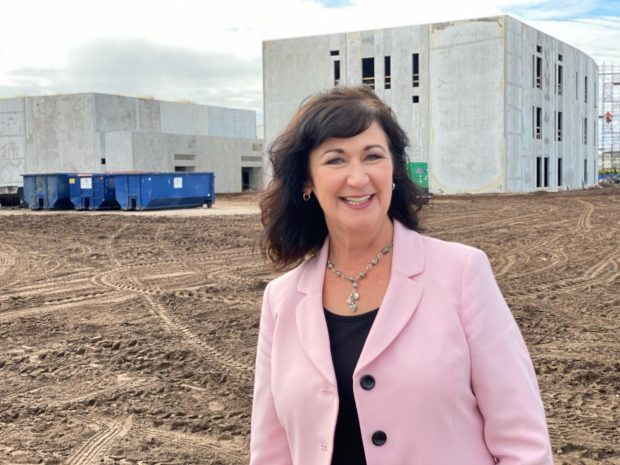 Courtesy Photo
Catherine “Missy” Lennard has been named the inaugural principal of the not-yet-named PK-8 school in Waterset.

Returning seniors come dressed in their caps and gowns to bear witness to the journey ahead, while the fifth-graders raise money for scholarships to give to three graduating seniors. The fifth-graders vote for the scholarship recipients, based on application essays they receive. To be eligible to receive the funds, a graduating senior must have plans to pursue college studies, a technical education or industry certifications.
As for her own “graduation,” Lennard said she looks forward to meeting her inaugural Waterset students and to the opportunities their new school will afford.
As for what her father would say today, upon learning of her appointment to a school just miles from where he taught agriculture and social studies, Lennard had a ready answer.
“He would be excited and proud for me to grow my leadership and to take on the challenge of opening a new school,” Lennard said, “and I think he would like where it is.”

Toys for Tots brings Christmas morning to children in need