Veterans Day is observed on the 11th day of the 11th month annually to commemorate the day in 1918 when World War I ended. Until 1954, it was called Armistice Day; Dwight Eisenhower changed it in 1954.
Hillsborough County has about 104,000 veterans, and a substantial number of those are in south county. When the doors of the Sun City Center Community Association’s Community Hall opened on November 11, residents were happy to resume a tradition dating back 30+ years that was paused in 2020 due to pandemic health concerns. 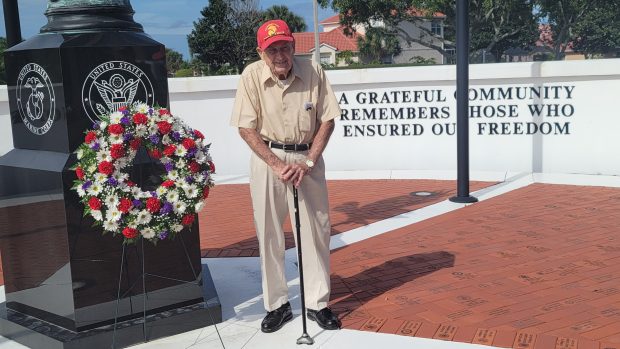 Immediately following the hall ceremony, participants followed Grand Marshal Edward Mahoney outside to the Veterans Memorial for a wreath-laying ceremony.

The event was sponsored by the military veterans organizations of Sun City Center, with American Legion Post 246 taking the lead. Commander Paul Wheat, Lt. Col. (Ret.), served as master of ceremonies.
Chaplain Lt. Col. Samuel Rorer, USAF (Ret.), United Methodist Church, presented the invocation and benediction.
Wheat relayed an impressive overview of the military career of Grand Marshal Edward Mahoney. Mahoney, a U.S. Marine Corps World War II veteran, participated in the landing and liberation of Iwo Jima.
Guest speaker was Theodore (Ted) J. Van Aulen Jr, former Sergeant, U.S. Army. In his remarks about the importance of service dogs in Vietnam, Van Aulen noted that there are 58,000 names on the Vietnam Memorial, and the Defense Department estimates that 10,000 lives were saved by the 4,000 dogs that were deployed. (Sadly, only 200 made it back home.) He recounted some harrowing personal experiences with Warlock, his own team partner, at Landing Zone Baldy South of Da Nang. Van Aulen was awarded the Combat Infantry Badge, Bronze Star, Vietnam Campaign and Service Medal, and the National Defense Service Medal. The bronze statue of a scout dog in the Veterans Memorial was modeled after Warlock. 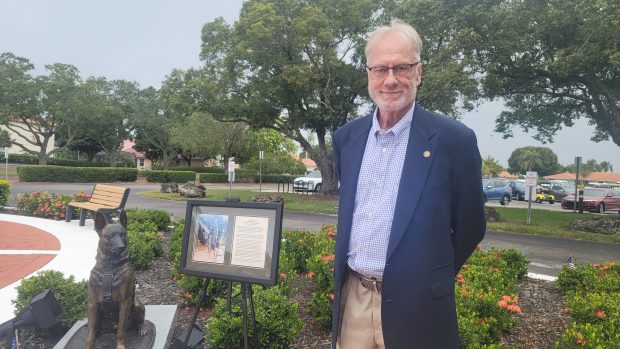 The Trinity Singers, directed by Trinity Baptist Church Rev. Bob Walker, were again on hand to present musical interlude and veterans service tribute as well as renditions of God Bless America and America the Beautiful.
Also on the program was a tribute to honor present and deceased veterans.
This year’s event was a welcome return to observing Veterans Day after a break last year. Although the traditional event was not held in 2020, the day did not go unobserved. A rainy day did not deter a wreath-laying ceremony at the Veterans Memorial.
The SCC Veterans Memorial was dedicated in January 2019. Bricks, engraved with veterans’ names, as well as individuals and organizations honoring veterans, are incorporated into the foundation. This is an ongoing project, and an order form for purchasing bricks can be found at the web site of Sun City Center Charitable Foundation (charitablefoundationscc.org). For information about the bricks, call Walt Cawein at 813-340-0533 or preferably at waltcawein@gmail.com/. 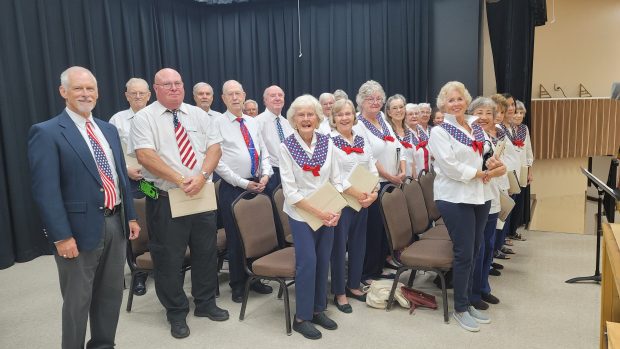 The Trinity Singers (Trinity Baptist Church) have participated in the SCC Veterans Day commemoration ceremony for well over two decades.