Sitting at the intersection of U.S. Highway 301 and Riverview Drive is Riverview United Methodist Church, where earlier this month congregants and friends gathered to celebrate the 175th anniversary of the church’s founding.
Among them was Charlie Lennard, a retired pastor and brother of Earl Lennard, Hillsborough County’s former superintendent of schools and supervisor of elections, who died in 2019 after a long illness. 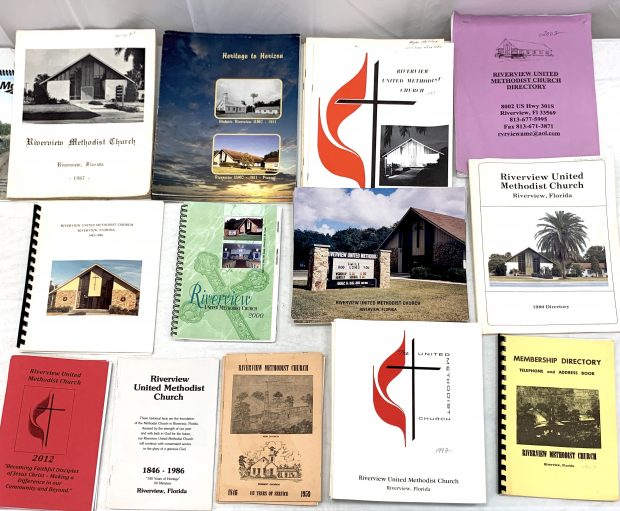 A sampling of church memorabilia on display at the 175th anniversary luncheon for Riverview United Methodist Church.

Hailing from a family of nine siblings, the Lennards are among the pioneering families of the Palm River/Riverview area, and among the longest-standing family members of the Riverview United Methodist Church (RUMC).
What does it mean for a church to celebrate 175 years?
“It gives you stability and it gives you security,” said Lennard, who was not a pastor at RUMC but was a pastor for more than 45 years in three states and for five churches, including Southside Baptist Church in old Sun City Center, south of Ruskin.
“It means I have always had a church to come home to, with people who love me, care for me, talk to me,” Lennard said, echoing the sentiments of many others in attendance at the Nov. 14 anniversary luncheon held after church services. “This church is where I got my foundation in the gospel and love of God and the ministry.”
Hired in 2018 is today’s RUMC pastor, Louis Telcy.
“For a church, it’s a privilege to be alive this long and it’s wonderful to look back,” Telcy said. “Maybe, after the COVID-19 is over, we’ll have the opportunity to build the church and make even more disciples. If this church were to close it would be like a death in the family. This church needs to be here, vibrant and to grow.”
Built in the 1960’s, today’s RUMC sanctuary traces its roots to a small, log meeting house built by Riverview pioneer Benjamin Moody and his neighbor, George Simmons, on the south bank of the Alafia River. 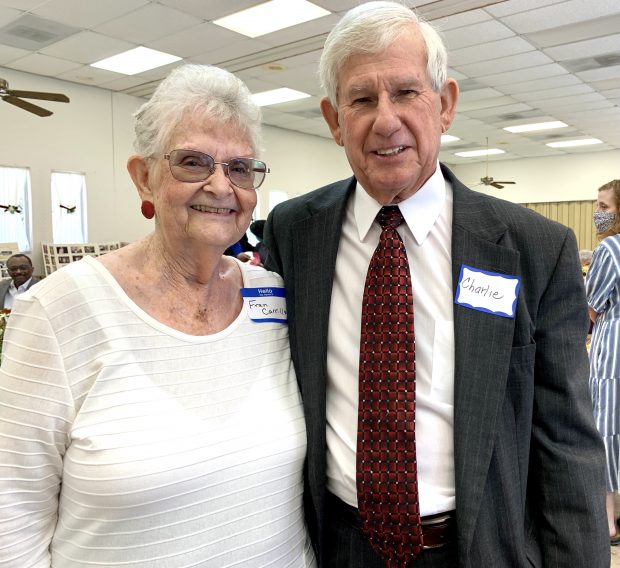 Completed in 1846, that log cabin structure is considered to be “the first building actually built as a Methodist church anywhere in Hillsborough County,” according to a brief history of the early RUMC, written by Dee Lindsey.
Trifold boards and albums ,prepared by former church historian Betty Ford Jones more than 10 years ago, were displayed at the celebratory luncheon, along with other memorabilia from church archives, which was coordinated by Annabel Lennard. With the help of other parishioners, picture collages were created, mainly by Jan Crichton, who has attended the church since birth. The building, in which anniversary luncheon attendees congregated, is named in memory of her father, Bill Crichton, an engineer. Octogenarians Albert Carillo and his wife Fran served, respectively, as the main cook and “main delegator.”
Many others assisted with the luncheon, which was attended as well by past pastors Tom Bridges and Sharon Austin, whose youngest daughter, Desiree Austin-Holliday, spoke about her memories of potluck dinners, baton twirling, Girl Scouts meetings, Sunday School, church choir sessions and “running around as young kids do.”
“What today feels like, it’s just a joy being here,” Austin-Holliday said, as she got a bit choked up. “This church has meant so much to me over the years. I’m just thankful my family and I had the opportunity to be here, and I love you all, so thank you.”
Working hard in the kitchen helping to prepare food trays to serve was Fay Francis, a church member for eight years.
“I’ve been to a big church, and you can get lost in the numbers,” Francis said. “The community here, they know who you are and if you haven’t been to church in a while, somebody is going to ask about you to make sure you’re okay.”
Congregant Russ Harris recalled his thoughts about church attendance both before and after meeting pastor Tom Bridges.
“My opinion of church was I didn’t want to go,” Harris said. “Soon, I was leaving the building expecting to come back the next week.” 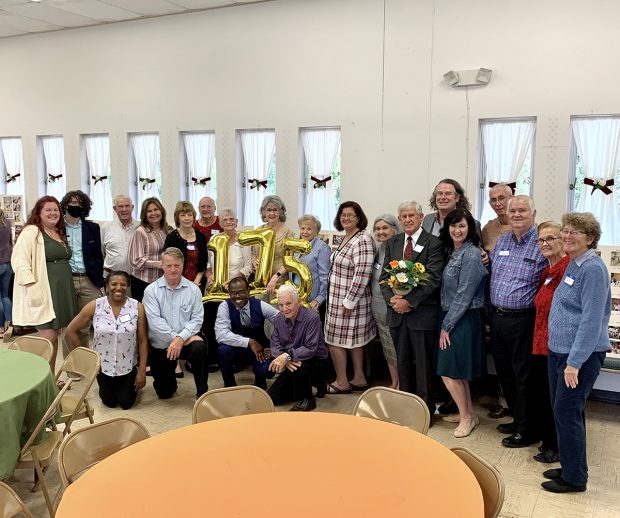 Stepping up to the microphone was a woman named Rosemary, who said upon moving to Hillsborough County from Boston she was looking for a Methodist church to attend.
“I kept passing by the church on U.S. Highway 301 and today I walked in and I’m so happy, very happy, I did,” she said. “This is a very special, loving church.”
As for his ties to Riverview United Methodist, Jeremy Lennard said he has “only ever known this church,” where his sister Missy was married and her two sons christened.
Moreover, “I was christened in this church, my mom and my dad were married in the church, pastor Sharon [Austin] married me in this church and pastor Tom [Bridges] christened my son Jack in this church,” Jeremy Lennard said, noting as well the historic relevance of a church dating back to 1846. “It’s just so deep in me to see a part of old Riverview still survive.”