Sumner High School is the only one of the five South Shore football teams that received a Sunday invitation to play in the 2021 FHSAA state playoffs. The regular season concluded statewide last Friday night. Sumner opens first round action in the Class 6A post-season FHSAA ( Florida High School Athletic Association) this Friday night at home at 7:30 against the Northeast High Vikings of St. Petersburg. 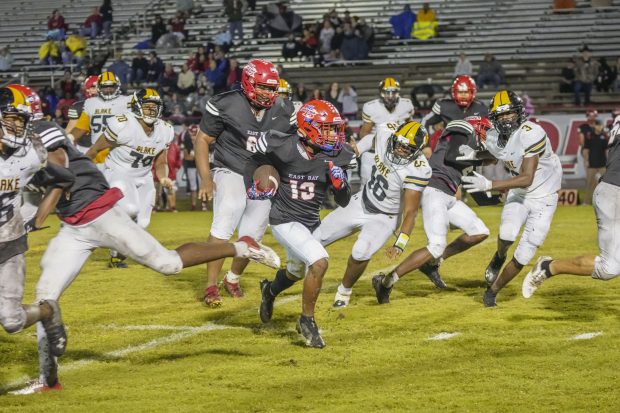 Sumner High Principal Robert Nelson was ecstatic about Sumner’s first-ever playoff game. “Everyone at the school is excited,” said the principal this week. “I congratulate all the players and head Coach Alonzo Ashwood and assistants.” Nelson noted that this is the first year Sumner has been eligible for the football playoffs. The new high school just opened last year. Nelson said no seniors were at the school last season when Sumner registered a 7-1 record. This year the Stingrays are 8-2 and looking for more against the Northeast High Vikings, a Pinellas County high school started in 1954, which posted a 9-1 worksheet this season. The winner of this first round 6A match plays the semi-final Nov. 19 against the winner of this Friday’s Pinellas Park-Hillsborough game.
The Sumner Stingrays were idle last week. The East Bay Indians concluded their 7-4 season on a positive note, thrashing Blake High in the East Bay stadium on Big Bend Road. The other Class 7A team in the South Shore, the Lennard Longhorns, also ended their 3-7 season but on a losing note, taking a whipping 48-7 from Plant City. The Riverview Sharks, after a great start to this season, lost their eighth game in a row, falling 20-6 to the Jefferson Dragons in Tampa. The Class 8A Sharks looked great winning their first three games before hitting the skids under Coach William Mosel to finish 3-8. For the entire season, Riverview scored 146 points and gave up 301. The Class 6A Spoto Spartans’ final record fell to 2-9 as the squad of Coach Alfred Smith lost last week to King High in Tampa 28-8.
EAST BAY BOMBS BLAKE
East Bay started the game with a surprise onside kick and recovered. Three plays later, junior Vincent Ketchup capitalized with a 19-yard TD run. Nick Linenberg booted the PAT. It was 7-0 early, and it was all the Indians needed.
On East Bay’s second drive, the Indians went 33 yards in six plays, scoring on a six-yard TD run by sophomore Jaelin Sneed. PAT by Linenberg was good.
East Bay’s defense then forced a four and out. The EB offense scored on the ensuing play with a 20-yard TD run by junior Vincent Ketchup. The extra made it 21-0.
[There was] another three and out by EB’s defense and another one play score, with a 46-yard TD throw from junior QB Nate Carter to junior Ronde Roseboro. Sophomore Dylan Simonsen’s PAT was good for a 28-0 first quarter lead.
In the second quarter, East Bay took it 47 yards on seven plays, capped off by a three-yard TD run by soph Izaiah Ketchup. A good PAT boot made it 35-0. Very quickly, East Bay had another short field and traveled 37 yards on four plays and scored on a five-yard TD run by Sneed. PAT was good, upping the half time lead to 42-0.
East Bay took its opening second half drive down to the red zone where Blake forced an Indian fumble, which went out of the end zone. Two plays later EB’s defense forced a safety by Jack Kyrch and Patrick Zeman after a bad Blake snap.
Blake recovered the ensuing kickoff. A wet ball slipped out of the Blake QB’s hands to East Bay DE James Jarboe who rambled 35 yards for a pick six. A bad snap made the PAT no good.
The fourth quarter featured a Blake bad punt snap and gave the ball back to EB on Blake’s 10-yard line. Three plays later RB Armando Becerril put six more on the scoreboard for the Indians. The PAT was no good, but the score was 56-0 in East Bay’s favor.
East Bay’s total offense had 47 yards passing and 279 yards rushing, lead by Vincent Ketchup with five carries for 66 yards. East Bay’s defense gave up to Blake minus six yards with two interceptions, a safety and 12 tackles for a loss.
Coach Gottman commented: “We were able to counter their gap blitzes with some outside runs and our defense played tough. We finished the season strong, and we can’t wait to get better next year. Unfortunately, East Bay’s 7-4 record wasn’t enough to make the playoffs. But it was a great season, and with so many returning we are expecting big things next season.”
LENNARD WHIPPED BY PLANT CITY
After a 30 minute lightning delay, Plant City received the opening kick. A 12-play opening drive was stopped by Lennard’s defense on 4th down, turning the ball over to the Horns. The Horns then punted on their opening drive. The first score of the night came with a 50-yard TD catch by Plant City. The extra was no good, and the visiting Raiders had a 6-0 lead.
The Horns would answer in the pouring rain when senior QB Gavin Henley found senior WR Ha’Keem Monroe for a 14-yard fade-route TD. The extra kick was good to provide a 7-6 for Coach Matt Kitchie’s Lennard squad. That was the last lead for Lennard as the Horns fell apart after that short lead.
The Raiders would strike back quickly. After a long kickoff return, the Plant City QB tossed another TD, this time from 25 yards out. The two-point conversion was no good, but Plant City held the lead 12-7.

After being pinned down close to the Horns’ own goal line on 4th and long, senior kicker Tony Loschiavo deliberately took a safety, making the score 14-7, PC. Plant City then turned a competitive game into a rout with three more first half TDs.
Plant City would score on the final play of the first half with a 30-yard Hail Mary toss. The two-point conversion was good, and Plant City had an overwhelming 33-7 halftime advantage.
Plant City held the Longhorns scoreless in the second half and put on 15 more points to end it at 48-7.
Lennard senior QB Gavin Henley finished his career as Lennard’s all-time passing leader in yardage (4249), passing TDs (41), and single season leader in passing yardage (2046) and passing TDs (24). Fellow senior Ha’keem Monroe leaves holding the single season TD reception leader (12).
(The Observer News appreciates the season-long help of Coach Joshua Herman of East Bay and Mr. James Henley of Lennard for help in reporting.)