They came to honor one of their own, a firefighter who died in the line of duty after losing his battle with coronavirus complications last month.
The funeral procession for Giovanni Ciancio, an American citizen who immigrated to the United States from Italy in his 20’s, commenced at 9 a.m. Nov. 3 at the Love First Christian Center in Riverview, 12847 Balm Riverview Road.
Ciancio died Thursday, Oct. 21. He was 55.
A driver and engineer, Ciancio was assigned to Station 15 in Palm River. He was in his 20th year working for Hillsborough County Fire Rescue. 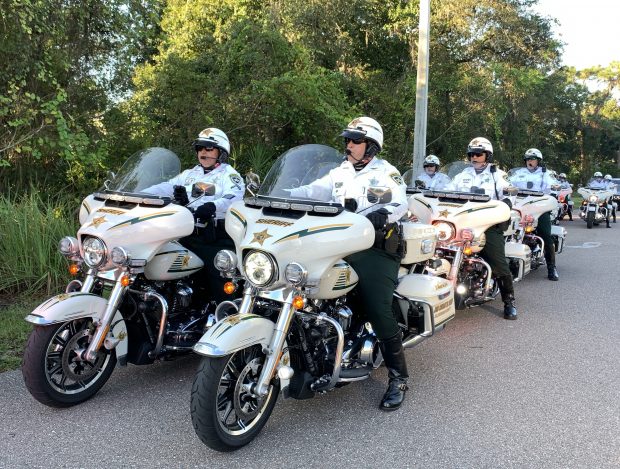 The words duty, honor and courage are painted in red on yellow Hillsborough County Fire Rescue trucks, which rolled by in the honor procession that included vehicles representing Hillsborough County’s 46 fire stations and eight battalions.
Engines from multiple fire rescue departments throughout Florida paid respect as well, as the nearly 24-mile procession traveled from Balm Riverview Road to 6310 East Sligh Ave., where the funeral was held at Riverhills Church of God in Tampa.
There to remember and celebrate Ciancio’s life and to support his “family and his fire family,” Hillsborough County Fire Chief Dennis Jones told those in attendance that on behalf of Ciancio, he had received condolences from fire organizations throughout the state and nation.
He also said that Ciancio will be memorialized at the St. Florian Firefighter Shrine at St. Patrick Church in Toledo, Ohio; the National Fallen Firefighters Memorial in Frederick County, Md.; and at the Florida Fallen Firefighter Memorial at the Florida State Fire College in Ocala.
Derrik Ryan, president of IAFF Local 2294, presented to Ciancio’s widow the Martin E. Pierce Commemorative Award, given to firefighters who make the ultimate sacrifice in service to their community.
Listed respectively as the cause, nature and “activity type” related to Ciancio’s line-of-duty death are exposure, COVID-19 and EMS/patient care, according to a U.S. Fire Administration online report.
At the church on Sligh Avenue, Jones said he was “overwhelmed” when he pulled into the parking lot and looked behind him to see “almost a mile of apparatus following the family” in the firefighter’s funeral procession.
“We are here to recognize Giovanni’s service, to honor his service and to celebrate his life and to also support his family,” Jones said.
Giovanni’s wife, Francesca Ciancio, who does not speak English, nevertheless spoke through Jones, who in turn recounted the widow’s remarks to funeral attendees.
“Giovanni was a dynamic person who loved adventure,” Jones said, on behalf of Francesca Giovanni. “He was a risk-taker, strong, courageous, but with a very kind heart. He was selfless and always wanted to help others.”
According to Francesca Ciancio, firefighting was in her husband’s blood and brought him great satisfaction; he chose to work at Hillsborough County Fire Rescue “because he wanted to be part of a group, a community, that stood together in brotherhood.” 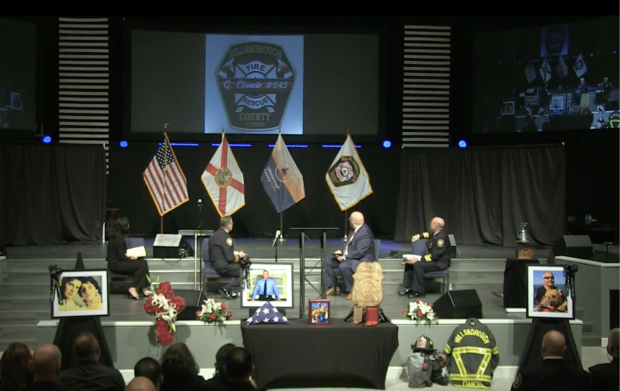 A screenshot of the funeral for Hillsborough County firefighter, Giovanni Ciancio, held Nov. 3 at Riverhills Church of God in Tampa.

Jones said Ciancio told his wife everything, and that his “dirty uniforms would show how hard he worked.” Sometimes “he would cry over situations,” Jones said.
“And seeing children hurt would break his heart.”
Ciancio started his job at HCFR on April 8, 2002 as a fire medic, after working as a Sunstar medic in Pinellas County. Having placed third out of 153 applicants on the driver/engineer promotion exam in 2015, Jones said he called Ciancio a few days before Christmas that year to give him the good news that his promotion had been approved.
“A pretty good Christmas present, I thought,” said Jones, “but the gift really turned out to be for our department.”
Jones said he and other firefighters visited Ciancio’s home after his death, and found “shelves lined with leadership books and manuals” and images of his life’s accomplishments, along with photos of his pets and family “and of his true love, Francesca.”
They met as children in Italy, where Ciancio moved with his family after his birth and early years in Switzerland. They were childhood sweethearts who later would marry and live in America, where Ciancio relocated in his 20’s and shortly after became a citizen. 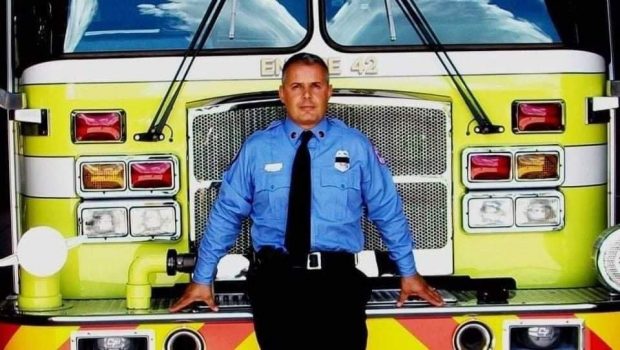 Jones in his eulogy referenced a famous saying that reads, “When you were born, you cried and the world rejoiced. Live your life so that when you die, the world cries and you rejoice.”
Ciancio lived such a life, Jones said, who at times throughout his eulogy appeared to fight back his tears.
“I’ve watched the tears of grown men and women, seen the compassion for a family member who was struggling and watched an entire department, an entire community, rally in support of this great man,” Jones said. “Giovanni lived his life in a manner that absolutely touched and changed lives. Rest easy, my brother, until we meet again.”
The service ended with the traditional final transmission from the HCFR Emergency Dispatch Center, which played over all radios, and for Ciancio aired both in English and Italian. Next came the ringing of the bell three times, signifying the end of the emergency and the return to quarters.
The words, “Godspeed, you will be missed by all,” ended the final transmission, followed by a bagpipe rendition of “Amazing Grace.”