South Shore high schools wind up their regular football season this Friday night. Once the South Shore gridiron teams conclude Nov. 5, the post-season match-ups for qualifiers will start.
Sumner High (see separate article) bumped Riverview High, 35-20. Now the Stingrays are idle, waiting to find out whom they open with in the post-season. In other action last week, 2-8, Spoto fell to Braden River 43-26. The 6-4 East Bay Indians defeated the 3-7 Lennard Longhorns, 40-18.
Games this Friday include Lennard hosting the Plant City Raiders. Plant City is 5-4 and lost last week to Newsome, 46-20. East Bay welcomes 1-7 Blake High to its campus.
Spoto travels to Tampa to face 1-8 King High, which was walloped last week, 56-0, by Jesuit High. The 3-7 Riverview Sharks go to Tampa to play 2-7 Jefferson High. 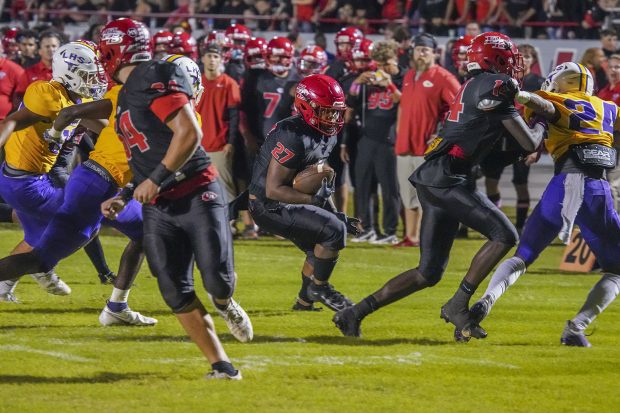 East Bay tops Lennard 40-18
East Bay Coach Mike Gottman commented after the game, “Great win, in front of a great crowd! Homecoming game against one of your biggest rivals. We played great in all facets of the game: offense, defense and special teams. What more could you ask for!”
The Lennard Longhorns Horns got the opening kickoff and were forced to punt after three plays. A promising East Bay Indians drive ended with a fumble and a recovery by Longhorns senior DE Jacob Treese. The next Horns drive ended in a punt, but a roughing-the -punter penalty against East Bay continued the drive that ended with an 18-yard TD pass from senior QB Gavin Henley to fellow senior WR Ha’Keem Monroe, PAT not good. Lennard had a 6-0 lead.
East Bay would strike back with a 15-yard TD run from Jaelin Sneed. East Bay took the lead, 7-6, with its PAT .
After a promising Lennard drive ended in a turnover on downs, East Bay struck again, this time with a three-yard rush up the middle by sensational Sneed. The Indians failed to convert the extra but led 13-6.
The Horns would go three and out, and on fourth down the Indians Trent Cherry would block the punt. EB would push its lead to 21-6 with a rushing TD from Sneed and a two-point PAT. The Indians would strike again after Lennard turned the ball over on downs, this time with a 49-yard pass from QB Nathan Carter to senior James Thompson. The two-point conversion was no good, and the Indians held a 27-6 lead.
A promising Lennard drive to end the first half came to a halt after a costly fumble.
After an uneventful 3rd quarter, the Horns would attempt to make a comeback. A 30-yard screen pass to junior Ellie Singleton set up a nine-yard TD rush by freshman RB Tryon Jackson. The two-point conversion was no good. Lennard still trailed 27-12.
East Bay would answer with a long sustained drive, capped by a one-yard TD dive by Sneed. The two-point conversion was no good. East Bay maintained a dominating lead, 33-12.
Lennard would have an answer of its own. After some chunk runs by sophomore RB Zashon Casimir, an 18-yard TD strike from Henley to Monroe made it 33-18. The two-point conversion failed.
The Indians would again answer with the final score of the night. Sneed ran four-yards for a TD, and the extra was good to make the final 40-18. 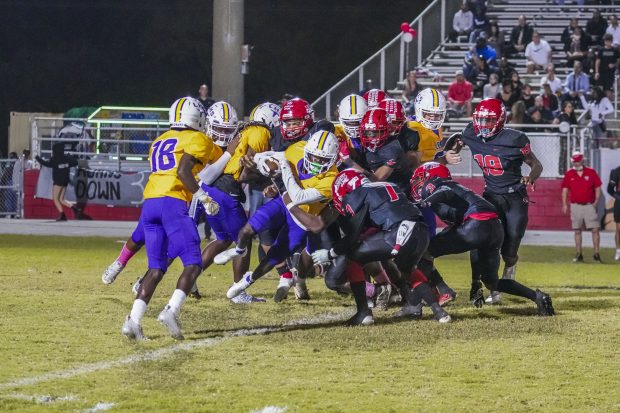 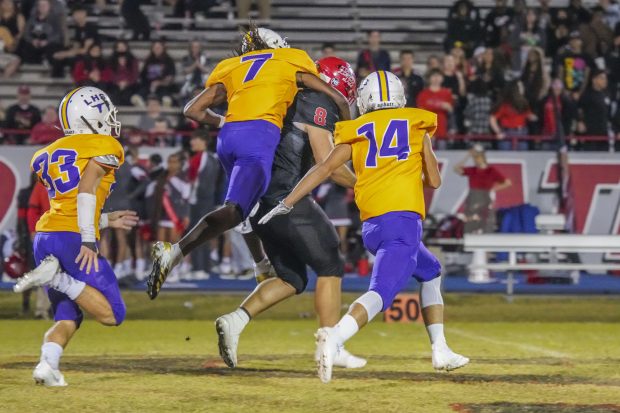 Spoto rally falls short
Coach Alfred Smith’s Spartans fell to Braden River, 43 to 26, on a Homecoming night at Spoto. The Spartans hung tough in the game in the first quarter. After Braden River jumped out to an 8-6 lead, the Pirates exploded for 14 in the 2nd quarter. Effective on the ground and through the air, BR tallied 14 again in the 3rd quarter before adding another seven in the 4th stanza. Spoto rallied for 20 in the 4th, but it was not nearly enough.