Bob Lochte has a healthy respect for preserving history, and his extensive journalism career reflects that. When he and wife Kate moved to Florida from Kentucky in 2018, he quickly gravitated toward Sun City Center’s History Society. His interest evolved into a collaboration with John Bowker to create an updated history book to celebrate the community’s upcoming 60th anniversary. Bowker, who authored the 50th anniversary book and is well-known in the SCC community as its historian, says the new book is “the result of Bob’s fresh approach to researching how this place came to be.”
Susan Muise, History Society president since 2020, is delighted with Sixty Years in Sun City Center Florida—The Grand Experiment at Florida’s First planned Retirement Community, which made its debut in October. It was available at the Community Society’s Oct. 16 FallFest and now is being sold in the Community Association’s Atrium building on Mondays from 10 a.m. to noon through Nov. 22 ($25 cash or check). After that, requests can be made by contacting the History Society: SCC historysoc@gmail.com or 813-633-3038. 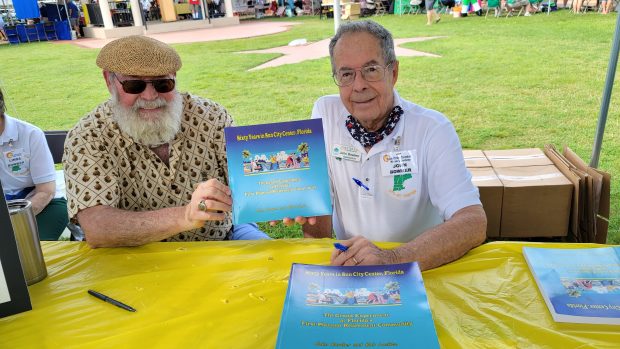 Phyllis Hodges Photo
From left: Bob Lochte and John Bowker partnered on a history update for the SCC community established by Del Webb in 1962. It is the story of a retirement community that has maintained its identity—self-governing seniors seeking an active retirement that includes fun and volunteerism.