The five South Shore high schools competing in football are preparing for the last week or two of the season and working to improve for possible play in the post-season. Meanwhile, three of the five schools registered wins on the gridiron last Friday under the lights. The most satisfying victory was Spoto High’s pasting of Brandon High, 46-0. Other South Shore winners were Sumner High (see separate article in this week’s Observer-News) and Lennard High. East Bay and Riverview both fell on the road.
This Friday all five high schools continue football action. East Bay looks to get back on the winning trail. The 5-4 Indians host the visiting 3-6 Lennard Longhorns in a big neighborhood battle. Another match-up between neighbors pits the (to this point) best South Shore squad, Sumner, against the Riverview Sharks in the Sharks’ lair. Spoto, under Coach Alfred Smith, is at home, risking its one-game winning streak against Braden River. 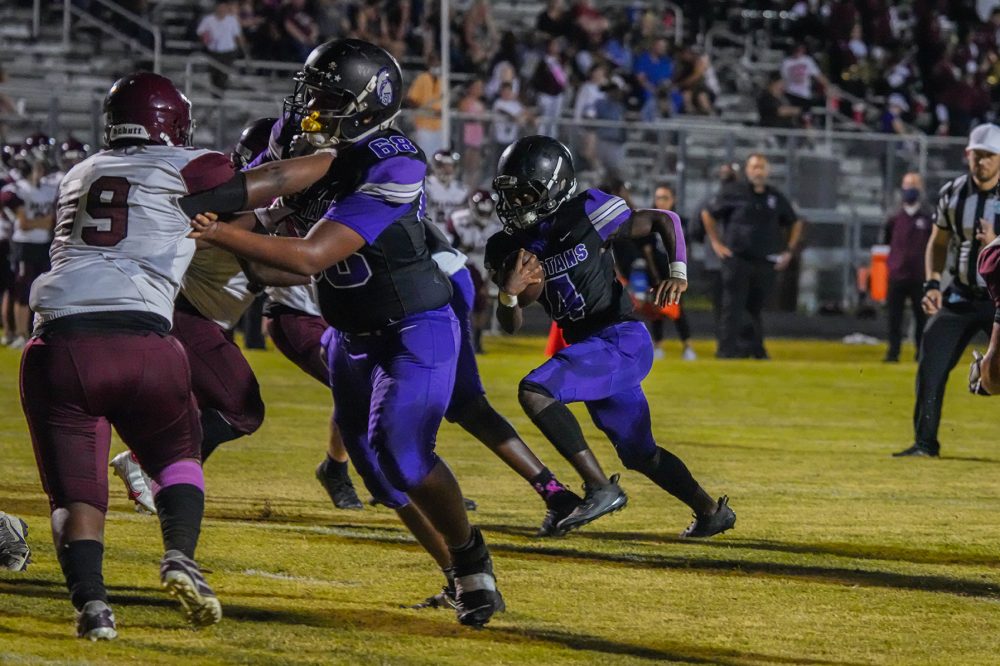 Spoto running back gets a block against Brandon defense in Friday victory.

HORNS HANG ON TO TOP DRAGONS
Coach Matt Kitchie’s Longhorns jumped out to a big lead at Tampa in last week’s game with Jefferson High. The Horns offense played as well as it has all season in the first half, taking a commanding 27-0 lead. A tremendous second half rally by Jefferson came close to forcing overtime. However, Lennard’s sophomore Justin Diaz blocked a 37-yard field goal attempt by Jefferson with only two seconds on the clock. The final scoreboard read Lennard 33 — Jefferson 31. After his 221 yard passing night, QB Gavin Henley became the career leader in passing yards for Lennard with a total of 3978 yards for his career. Players of the Game for Lennard were Ha’Keem Monroe, Antoine Bailey and Andrew Agosta.
Lennard received the opening kickoff and drove the field with chunk runs by junior RB/WR AJ Hills, junior WR Eli Singleton and freshman RB Tyron Jackson. The drive ended with a 20-yard TD throw from senior QB Henley to junior TE Tyler Russell; the PAT was no good, Lennard, 6-0.
The Dragons could only muster one first down on their first drive and turned the ball over on downs. Defensively, the drive was highlighted by a five-yard tackle for a loss by Horns senior linebacker, Dominick Murphy.
The Longhorns would strike quickly when Henley connected with senior WR/ DB Hakeem Monroe for a 45-yard TD pass and catch. The PAT was blocked, but Lennard led 12-0.
Jefferson was forced to punt on its next drive and an errant snap went over the punter’s head for a safety. Lennard was cruising 14-0.
Lennard would score again, this time with a 20-yard TD run by AJ Hills. The extra was good, and Lennard was up 21-0.
The Longhorns would get the ball back quickly and strike even quicker. This time WR Eli Singleton was playing QB and hit freshman WR Ramsey Cole for a 40-yard scoring strike. The PAT was no good, but Lennard had a 27-0 halftime lead.
Neither team could get much going early in the 3rd quarter until a promising drive by Jefferson was stopped by a fumble and recovered by Lennard junior WR/CB Antoine Bailey.
A few plays later, the Dragons would get the ball back on a Lennard fumble and capitalize with their first score, a five-yard rush and two-point conversion, making it 27-8, Lennard. 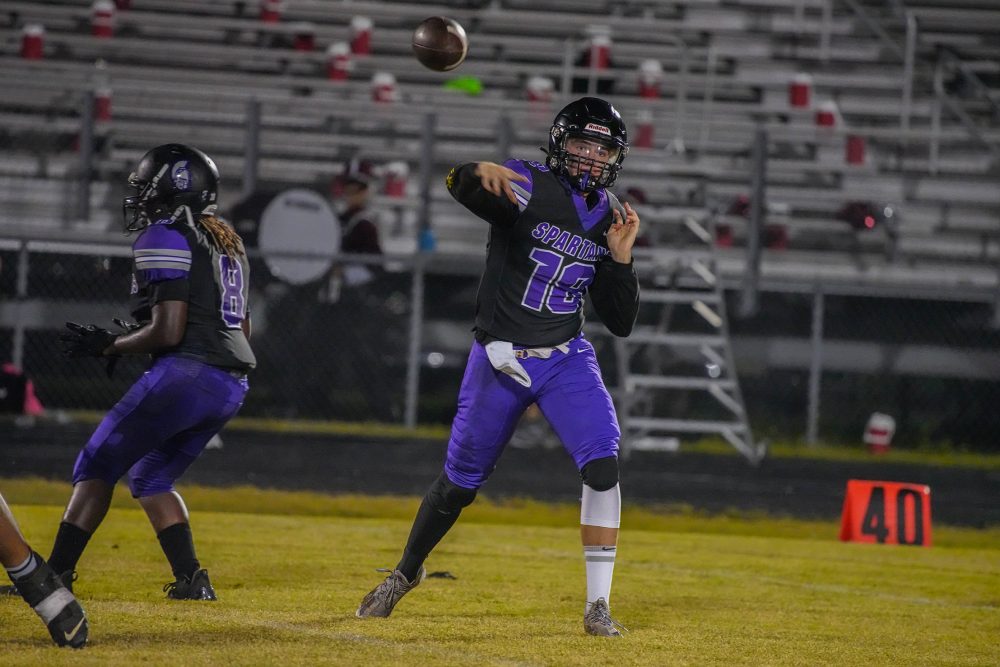 After a three and out on the very next play, The Dragons would find a spark with a 55-yard rushing TD. The two-point conversion was good again, making it 27-16.
Lennard could not convert on a 4th and 15, failing on a dropped pass, giving the ball and momentum back to the Dragons. The Dragons would score again with a 10-yard run. The two-point conversion was good again, bringing the score to 27-24, Lennard.
With the game now tight and all the momentum on the side of Jefferson, Henley would connect with Monroe for a 65-yard TD pass and catch. The Horns extra failed. Lennard led 33-24 with five minutes left in this now-tight game.
Jefferson had yet another answer of its own. After a 40-yard kickoff return put the Dragons in position for a 40-yard TD run, their PAT was good. Now trailing only 33-31, the Dragons smelled victory.
Jefferson would get the ball back with three minutes left trailing by only two. The Dragons, with a few runs, would get the ball down to the Lennard 20 with two seconds left in the game. Jefferson would attempt a 37-yard field goal. The FG was blocked by sophomore DT Justin Diaz. Lennard had won the hard-fought 33-31 final.
EAST BAY BLOWN AWAY
The East Bay Indians of Coach Mike Gottman dropped their third straight, a 29-13 verdict, to the Manatee Hurricanes. For the 2-6 Hurricanes, it was their second straight win over a South Shore team. The week previous, the Hurricanes won their first victory, beating Lennard 34-26.
The home-standing Manatee High jumped out to a 13-0 first quarter lead over the visiting Indians, putting together two nice offensive drives. Sparking Manatee were its QB senior Jayse Berzowski and running backs Roy Burchett and Elijah Stewart.
East Bay showed some resilience and eked its way back into the game. Utilizing a 50-yard drive, junior QB Nate Carter clicked on a 15-yard TD pass with junior Aiden Showers. The PAT failed, but EB was back in the game, 13-6. However, Manatee responded on a third and long with a 38-yard scoring pass to make it 19-6 at halftime.
The Indians scored again in the third quarter. EB took advantage of a bad snap on a fourth down by Manatee. With good field position, the Indians were at fourth and goal when QB Carter scored on a five-yard TD pass connection on fourth down with junior Ronde Roseboro. The PAT made it a 19-13 game, and East Bay had a chance to win.
The Indians could not score again, however. Manatee added a 32-yard field goal to make it a two-score game in the third quarter 22-13. Later in the fourth stanza, the Hurricanes sealed the win on a 5-yard scoring run by Burchett and a PAT to push it to the final 29-13.
Stat-wise, EB’s Carter hit 10 of 19 passes for 109 yards and two TDs. The junior QB also rushed 11 times for 53 yards. Indians supporting Carter included soph Jaelin Sneed with 48 yards on 11 carries, and soph Izaiah Ketchup toting three times for 32 yards. Junior Aiden Showers grabbed five passes for 48 yards and a score. Seniors James Thompson and Trent Cherry led the EB defense with aid from Roseboro and senior Patrick Zeman. Contributing a sack and a fumble recovery was junior James Jarboe. 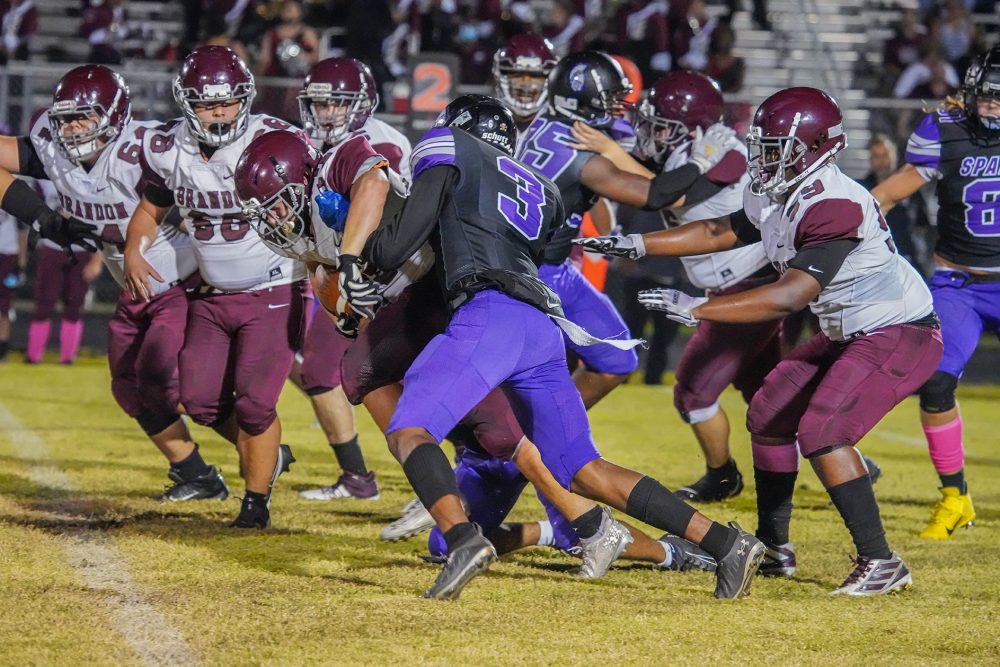 Coach Gottman commented, “Tough loss tonight. We have a lot of growing up and learning to do. We will get better!”
RIVERVIEW LOSES AT NEWSOME
The 3-7 Riverview Sharks of Coach Wiliam Mosel opened the season with a Kickoff Classic win and two more victories. Since then, the Sharks have found some rough sledding. Riveriew added another loss to its schedule last Friday. The winner this time was the Newsome Wolves. Playing at Lithia, the Sharks fell behind early, trailing 28-0 after the first quarter. Newsome, added to its commanding lead in the second quarter, going up 42-0. The game went to a running clock in the second half. Newsome added two more TDs. Riverview finally scored a 4th quarter TD and PAT to end it 55-7.