The Stingrays closed their regular season home schedule with a rout over the Brandon Eagles in the Tank, 64-0, moving Sumner’s record to 6-2 and extending its win streak to three games. Sumner will be on the road vs Braden River in Bradenton on Oct. 22 at 7:30 p.m. as it winds down its regular season. 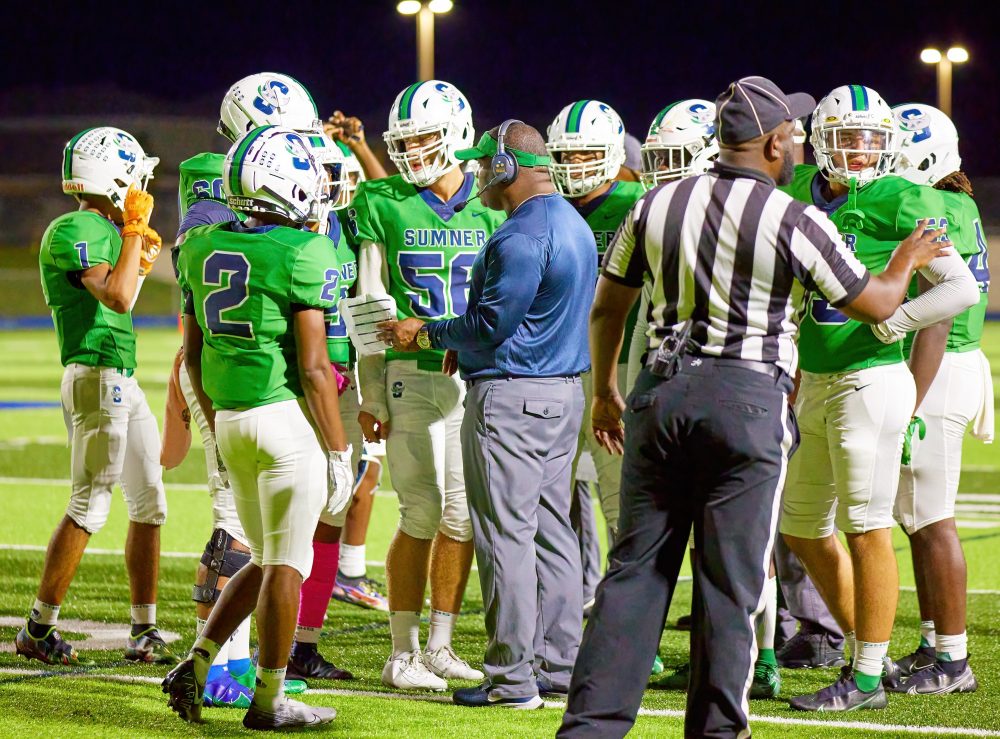 Coach Ashwood talks to the team during a time-out on the field.

In a schedule oddity, Sumner has played Brandon twice this season, with both games in the Tank. The first matchup resulted in a 75-0 rout in what appears to have been a scheduled game vs Leto. Ironically, Brandon has only put up points vs. Leto, being shutout in all of its other games. The outcome of this game would be much the same and, again, decided early. Sumner would end the first quarter up 27-0 and close the half up 50-0. The Stingrays scored on their first possession with sophomore QB Greg Smith III connecting with Tyler Williams on a 52-yard bomb. Only three minutes would elapse before Junior Kylen Webb would carry for a 29-yard score. The defense would set up the next score with a Raheim Sexil interception of a Brandon pass, setting up Sumner on the Eagles 26-yard line. QB Smith would cash in with a 26-yard TD to J. J. Boyd, followed up by a Devin Spencer 45-yard rushing TD to close the first quarter. 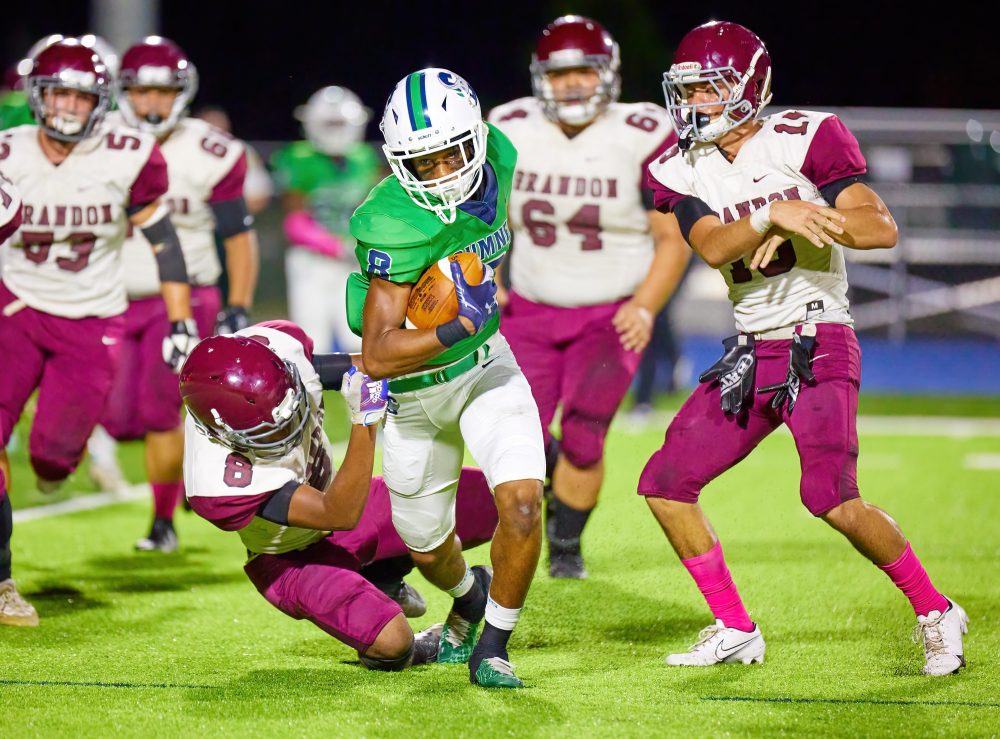 The defense, which has not given up more than 22 points in any game, would again come up with a pick by Jeremiah Exceus, and QB Smith wasted no time connecting again with Tyler Williams for a 39-yard TD. Brandon’s struggles would show on the ensuing kickoff as not a single Eagle player would pickup the kickoff, acting as if it was a punt and allowing Sumner to recover the ball. The play would go as nearly a 25-yard onside kick. Sumner would use that opportunity to run a trick play, handing the ball off only to have it end up back with QB Smith who would complete a 38-yard pass to Kade Ray, scoring twice in 11 seconds. The competitive nature of this game ended early and allowed Coach Ashwood to get every player game action. 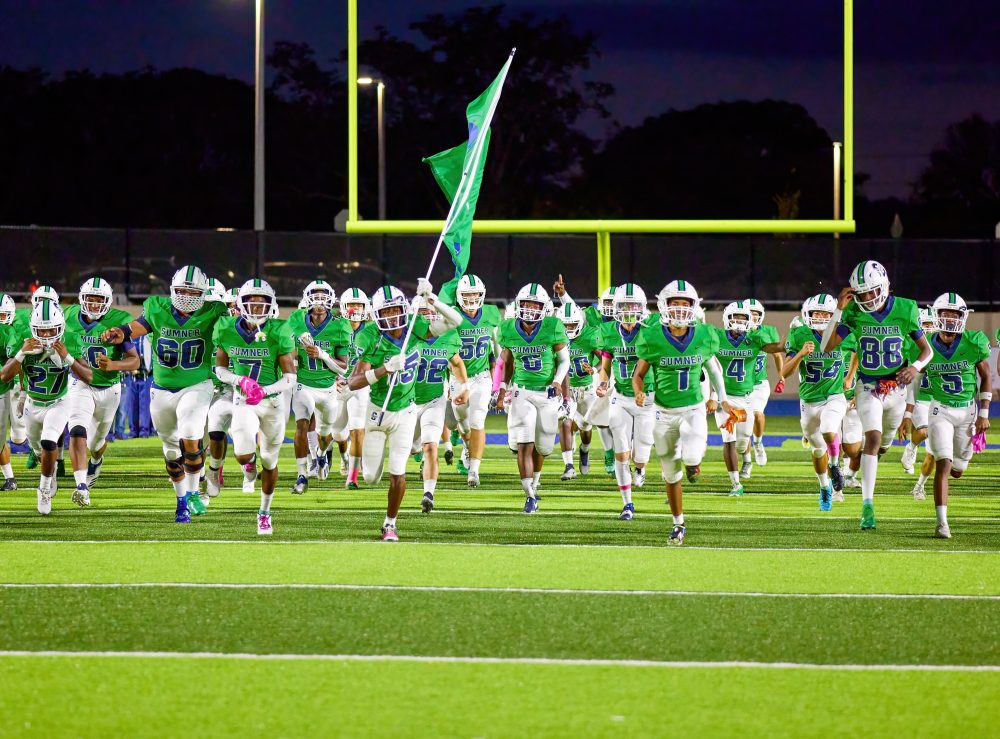 Sumner would add two scores in the second half. The first would be a 65-yard Justin Mitchell Rushing TD. Sumner would be aided by another interception, with Ja’Maree Thomas setting up the Stingrays on Brandon’s seven-yard line. Stingray Ethan Taylor would get the call and complete the night with a 13-yard rushing TD. The offense had a big night with 400+ yards and the defense would complete its third shutout effort on the season. The Stingrays will face a test on the road vs a 6-0 Braden River in a 6A District 12 matchup. Sumner will close out the regular season on the road vs Riverview on Oct. 29. 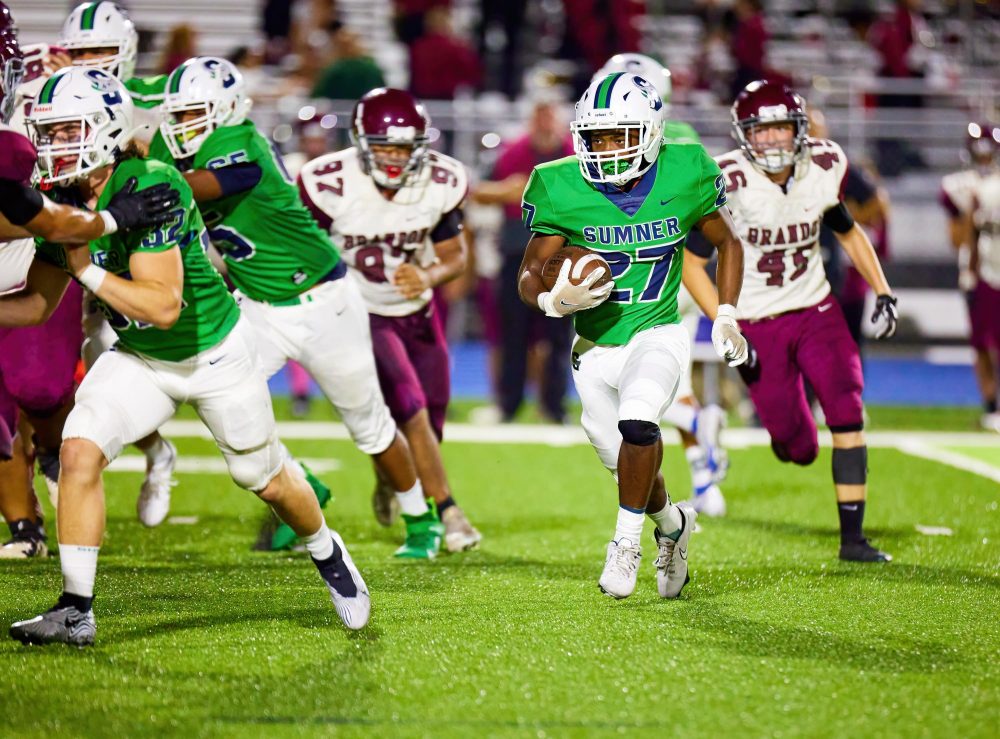