South Shore high school football took a hit in last week’s action as only Sumner came out victorious. The other four gridiron squads came up short.
Sumner ran its worksheet to 6-2 by demolishing Brandon, a second time, 64-0. Meanwhile, Lennard could not maintain an early lead over previously winless Manatee High, which registered its first victory of the season. The East Bay Indians fell to 5-3 on the season by dropping a 19-13 match to Palmetto. Riverview High Sharks lost again, this time to the Plant Panthers, 35-16. Spoto High Spartans could not stay with the Southeast High Seminoles, who celebrated their homecoming with a 39-0 rout.
All five high schools take to the gridiron under the lights again this Friday. The downtrodden 1-7 Spoto Spartans, under Coach Alfred Smith, have the opportunity to possibly pick up a win. The Spartans are the lone South Shore squad to play at home, hosting the hapless 0-7 Brandon Eagles. Lennard’s 2-6 Longhorns, under Coach Matt Kitchie, take the short trip to Tampa to engage 1-6 Jefferson High. East Bay also has a bus ride, traveling to Manatee High. The Riverview Sharks of Coach William Mosel will have a tough night as they trek to Lilith to face the 5-2 Newsome High Wolves. Sumner hits the road to tackle 6-1 Braden River in Bradenton. 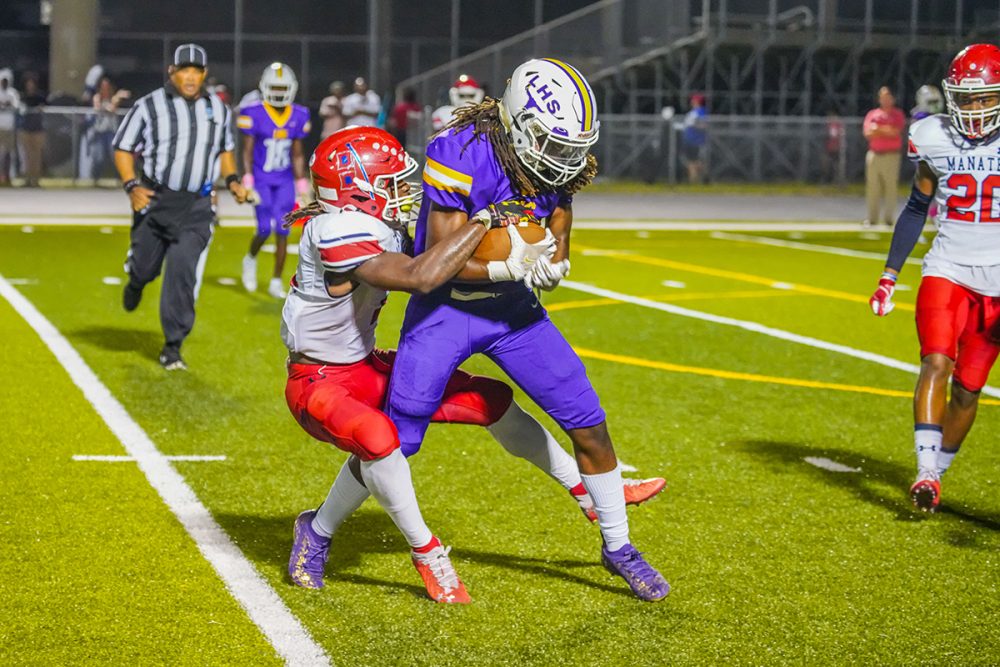 Manatee tries to strip the ball.

Lennard received the opening kickoff and drove the field, mostly with chunk runs from senior QB Gavin Henley and junior AJ Hills, a running back and wide receiver. The possession was capped off by a two-yard QB keeper from Henley. Tony Loschiavo booted the extra point, and it appeared Lennard was on the way to a win. But someone forgot to tell Manatee! On the most crucial sequence of the game, after a big sack and underdog Manatee loss by Senior DE Jacob Treese, the Hurricanes were forced to punt. The Longhorns anticipated taking a two-TD lead. Lennard’s offense drove the field with the big play being a 35-yard reception by Hills. Unfortunately, the promising drive ended with a tip-passed interception in the end zone. The lost momentum and lost score would haunt Lennard.
Manatee took possession and capitalized, driving the field and scoring on a 30-yard TD pass from quarterback Jayse Berzowski to wide receiver Jaleel Duncan. A two-point conversion attempt was no good. The Horns still held a 7-6 lead.
Lennard went three and out on the next possession. Manatee would capitalize with a six-yard TD run up the middle by soph runner Cory Sanders. The extra made it a 13-7 Manatee lead.
The Horns would not welter. They would drive the field, highlighted by a 15-yard run from freshman RB Tryon Jackson and a 13- yard TD reception from talented junior WR Eli Singleton. The Lennard PAT failed and the game was knotted 13-13.
The tie stood as Lennard halted a Manatee drive on the Horns 20 to end the first half.
The Hurricanes would come out screaming to open the second half with up-tempo play calling. The Hurricanes QB hit a 35-yard pass play to Tyreak Allen. This set up Manatee at the Lennard six-yard line. Manatee finished up with a six-yard TD run by QB Berzowski, and the good PAT pushed the visitors lead to 20-13.
Lennard would not give up. Helped by a nice 32-yard kickoff return by Tryon Jackson, the Horns would answer with a five-yard TD pass on 4th and goal from Henley to senior Hakeem Monroe, and the extra tied it at 20-20.
Manatee would answer once again after a spectacular 35-yard reception by Duncan gave the Hurricanes the ball inside the Horns 20-yard line. On third and long, Berzowski found Duncan for another TD reception. The Manatee PAT made it 27-20, Manatee.
The back and forth continued with yet another long drive by Lennard. The Horns utilized a combination of runs and passes. The drive culminated with an eight-yard pass from Henley to Monroe. Manatee blocked the PAT attempt and held a 27-26 lead.
Not to be outdone, the Hurricanes would once again answer with a long drive of their own to seal its first win of the season and drop Lennard. Aided by a long reception from Koby Keenan, the Hurricanes clinched the victory with a three-yard TD run by soph Cory Sanders. The extra ran it to 34-26.
Lennard continued to struggle but fell short. Lennard’s potentially tying drive would come to a halt on 4th and 12 with a sack by the Hurricanes. Lennard’s defense would hold Manatee and give the Horn possession once again with less than two minutes on the clock. Unfortunately, an errant snap would end any chance for a Lennard come back.
Henley finished with a 23 for 40 passing night for 212 yards and three TDs. The senior QB also rushed 14 times for 79 yards and a score. Lennard receivers Singleton and Monroe gathered five receptions each and Tyler Russell collected three passes.

East Bay Coach Mike Gottman summed up his team’s drop to a 5-3 worksheet. Coach said after the loss to Palmetto, “I sure am proud of our boys. They fought to the last second. Defense made some huge stops and kept us in it. Our offense just ran out of time. Can’t let this hang over us for too long. We’ve got to get ready for Manatee next week.”
The Indians scored first on the road. Following a surprising but unsuccessful opening onsides kick by Palmetto, EB had possession on the Tigers 30-yard line. Indians QB Nate Carter hit speedy Vincent Ketchup on a scoring pass, and Nick Linenberger’s PAT boot gave the Indians the early 7-0 lead.
Palmetto responded with a 13 play 55-yard drive, capped off by a five-yard scoring run and a tying PAT.
In the second stanza Palmetto took advantage of a poor Indians punt that gave the Tigers great field position at the EB 20-yard line. This turned into a Palmetto four-yard rushing TD and the extra shot the Tigers ahead 14-7.
Another bad break for EB followed. Palmetto blocked an Indian punt and took over at the EB 23-yard line. The Indians D came up big and forced a 37-yard Palmetto field goal attempt, which went awry. EB could not get much going offensively the balance of the first half. The Indians defense continued to battle, but Palmetto hit a 24-yard field goal as the first half came to a close with Palmetto ahead 17-7.
East Bay took the first drive of the second half 40 yards but fumbled on 4th and 2 and Palmetto recovered. The Tigers could not produce much against a rigid EB defense, which forced a Palmetto fumble on a QB scramble.
With another possession, the Indians put together another offensive drive. This resulted in a 16-yard pass from Indians QB Carter to Aiden Showers. The PAT kick was no good, and Palmetto still held a 19-13 advantage in the fourth quarter.
Palmetto took its next possession and drove down to the East Bay one-yard line. The EB defense rose to stop the Tigers. EB had possession but received a holding call in the end zone for a safety.
East Bay then gambled but lost, attempting to onside kick from its own 20 but was unable to recover. The Indians D came up big again and held Palmetto to another missed FG attempt.
With zero timeouts and 1:40 left on the clock, EB started to make a last minute drive but came up short with an interception by Palmetto on 4th and 15.
EB’s Carter went six for 14 for 87 passing yards. Vincent Ketchup had two catches for 40 yards and one touchdown. Ketchup also led the team in rushing with 65 yards on six rushes. East Bay had 138 rushing yards, 225 yards total. East Bay’s defense held Palmetto to 199 yards rushing and 72 yards passing for 271 yards total.