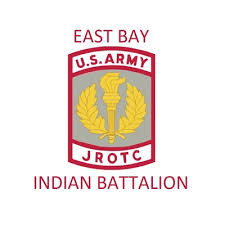 Contrary to public perception, Junior Reserve Officer Training at the high school level isn’t about recruiting teens into military service. Granted, some graduates choose to follow that path, but many go on to college to pursue other careers.
“The foundation of our program uses Army values – leadership, loyalty, duty, respect, selfless service, honor, integrity and personal courage – to prepare young people for the future, no matter what they decide to do with their lives,” said retired Army Maj. John Gavigan, East Bay High School senior Army instructor. “This outstanding program motivates them to become better citizens.”
Gavigan served in the military 23 years, including six combat tours. During this time he was a captain and company commander of 350 first-year soldiers whom he genuinely enjoyed teaching, coaching and mentoring. So when he retired, he found the opportunity to do what he loves with high school cadets.
“It was an easy transition,” he said. “They’re the future of our country.
He currently oversees 178 cadets in the JROTC program, and all engage in community service. Seniors comprise its leadership team, which comes up with various service projects each year. These involve teamwork; enhance learning; and teach lifelong skills, like budgeting, resource management and written and oral communication skills.
Once they complete a service project, cadets provide briefings on what they learned to the U.S. Cadet Command, which takes the feedback and provides suggestions for improvement.
This year, upon the school principal’s approval, the JROTC wants to promote its program, including its expectations and requirements, to Eisenhower Middle School 8th graders.
The plan is to highlight JROTC competitive teams for these youngsters to let them see what the program involves. These include the Raiders (physical challenges, including obstacle courses, stress tests and running); drill (marching, teamwork and precision skills); and rifle marksmanship, using pellet guns).
Already this school year, the East Bay High School JROTC has performed hundreds of hours of volunteer work – from presenting the Colors at East Bay’s football games and at Tropicana Field in St. Petersburg to providing security and escort duty to Hillsborough County School District VIPs.
Cadet Battalion Commander Justice Sniffen, Cadet Command Sgt. Maj. Matthew Nowell and Cadet Battalion Executive Officer Natasha Santos lead the cadet student body.
All four 17-year-old seniors have been in the East Bay High School JROTC program for the past four years, and each highly recommends the program.
“I grew up in a military family, so I looked forward to being part of JROTC,” said Sniffen, who plans to go to college, join its ROTC program, become an officer and specialize in aeronautical science. “When I joined JROTC, I found I liked the teamwork and motivation.” 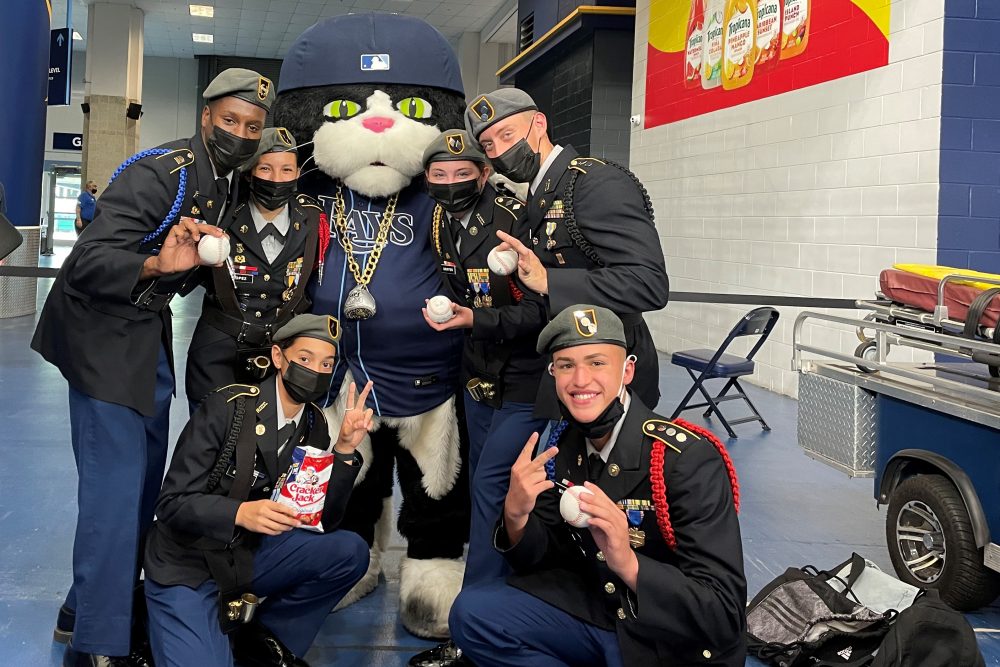 JOHN GAVIGAN PHOTO
East Bay High School cadets gather around Tampa Bay Rays mascot DJ Kitty for a photo at Tropicana Field, where the school’s JROTC recently presented the Colors before a ballgame. In the back row, from left, are Matthew Nowell, Taty Santos, Justice Sniffen and Wyatt Wood. In the front row are Tasha Santos and Felix Matos.

Nowell, who is also overall commander of the Raiders, said he joined JROTC to gain discipline and motivation for becoming an adult. In turn, he enjoys motivating others.
“(The program) has helped me grow as a leader,” said Nowell, who also plans to go to college and join ROTC.
Santos will also go to college, where she plans to play a sport and become a professional athlete or architect. JROTC has helped her find herself.
“I’ve gained more confidence in how I am and who I am,” she said. “I’ve learned to stop procrastinating and become more responsible.
“(JROTC) is a lot of fun,” she added. “I’ve built better relationships and a whole new group of friends.”
On Sept. 18, the East Bay JROTC Raiders fiercely competed at the University of South Florida, Gavigan said. East Bay took 1st place in the obstacle course, while finishing in 2nd place overall. It was the program’s best finish in more than five years.

Parents can get readily available help from Experienced Autism Alliance