Introduced in part as a “dynamic business owner” with three enterprises, Vanity Barr-Little took to the podium at The Regent in Riverview to receive recognition for her military service.
The Greater Riverview Chamber of Commerce at its monthly luncheon singles out one of its own for military recognition, and the Sept. 28 spotlight was on Barr-Little, owner of the Sylvan Learning Center in Apollo Beach, the CNA Training and Testing Center in Brandon and Reliable Livescan, which specializes in digital fingerprinting for background screening.
A U.S. Air Force veteran, Barr-Little said she opened a Sylvan center in the fast-growing Apollo Beach/Riverview area in March after seeing the gains in her own children, who attended a now-closed Sylvan Learning Center in Brandon. The gains for her oldest child particularly stood out.
“As a military family, we would get a new assignment every three years, and it affected him academically switching schools,” said Barr-Little, whose husband, Kourtney Little, is a U.S. Army veteran. The coronavirus pandemic last year brought on a whole new level of learning disruptions, Barr-Little added, which led to Sylvan enrollment.
“My son’s academic confidence was the highest it’s ever been and he made so many gains,” Barr-Little said. “The defining moment for me was when he said, ‘Thank you, Mommy, for bringing me to Sylvan because I feel so much better about the school year now.’ That evening I went home and talked to my husband and said, ‘I know we can’t be the only parents with kids who are struggling right now and worrying about the school year. I wonder what it would take to open a Sylvan Learning Center in our area.’ ” 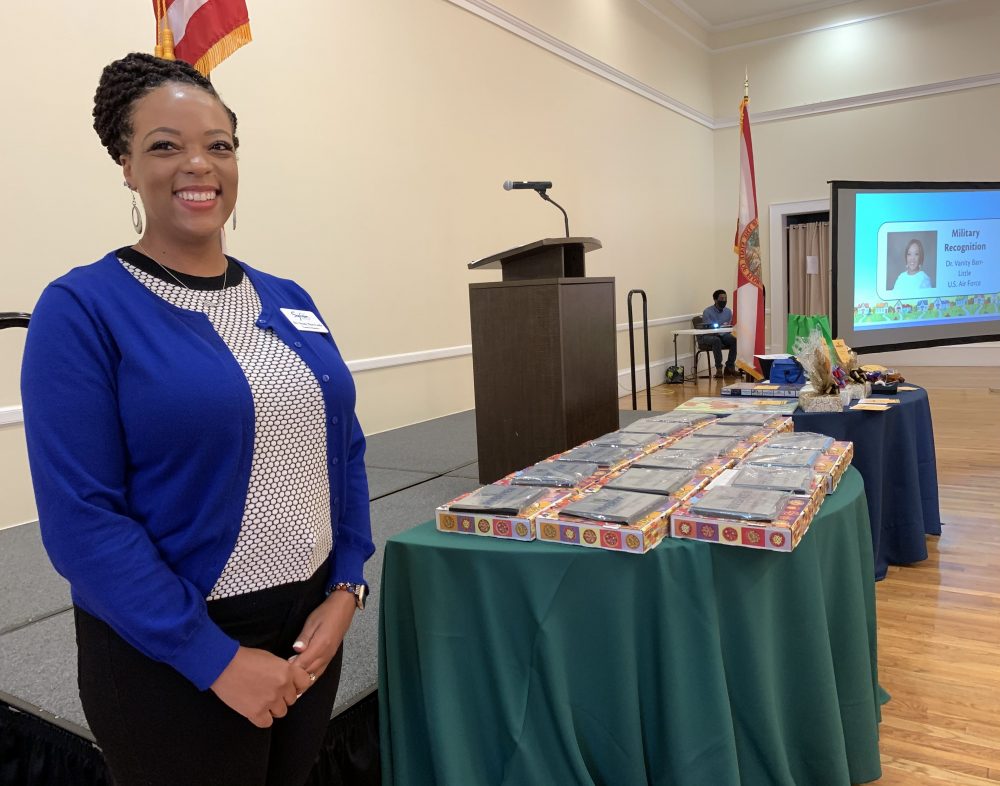 Barr-Little, whose family lives in south Hillsborough County, said she reached out to Sylvan franchise development “and before I knew it, I was an owner.”
An entrepreneur at heart, Barr-Little in 2017 launched the CNA Training and Testing Center in Brandon, which specializes in helping people pass the exam to become a Florida certified nursing assistant. Barr-Little, who holds a doctorate degree in business, said at the time she was looking for a way to make a difference in the community, researched her idea and assembled her team.
As she put it during the 2017 ribbon-cutting for her now-expanding business, which this year won a business excellence award from the Greater Brandon Chamber of Commerce, “We make becoming a CNA easy and affordable.” The company also provides CPR training and serves people looking to become a phlebotomy or medication technician or home health aide.
As for receiving the chamber’s military recognition, Barr-Little said that while it came as a surprise, “I consider it a huge honor.”
At the luncheon Sept. 28, Joe Eletto, a member of the chamber’s military affairs committee, addressed the highlights of Barr-Little’s almost 13-year military career in the U.S. Air Force, serving as a non-commissioned officer and paralegal in the areas of administrative law and military justice.
Also, “as a defense paralegal, she was responsible for all paralegal functions for the Office of the Area Defense Council at Joint Base Elmendorf-Richardson in Anchorage, Alaska,” Eletto said, “delivering defense services to more than 6,000 members.”
In noting her many personal and unit awards, Eletto noted two Air Force Commendation medals, two Air Force Outstanding Unit awards, Iraqi Campaign Medal with a Bronze Star, Global War on Terrorism Service Medal, three Air Force achievement medals with four oak leaf clusters, the Korean Defense Service Medal, Air Force Longevity Service Award and Airman Leadership School Distinguished Graduate Award.
A member of the Brandon chamber’s 2019 Leadership Brandon class, Barr-Little’s community and philanthropic work includes A Kid’s Place of Tampa Bay, the Guardian ad Litem Program of Hillsborough County, Kiwanis Club of Greater Brandon and the Andrew Joseph III Memorial Foundation, which advocates for safe communities for children, youth and young adults.
A Riverview student, Joseph, at age 14 was ejected from the Florida State Fair on Student Day in 2014. Hillsborough County deputies reportedly dropped Joseph off two miles from the fair, where he was killed trying to cross Interstate 4 to return to the fairgrounds to meet his ride, according to a news report on court records.