If Hillsborough County officials have their way, yet another traffic roundabout will get the green light, this time at the intersection of Balm Riverview and Symmes roads in Riverview.
Completion of the $3.2 million single-lane roundabout is set for 2024, with design and land acquisition completed in early 2023.
County officials promote the roundabout fix for the traffic- congested area, in part due to their contention that roundabouts “have been found to decrease the likelihood of severe or fatal injury crashes.”
Not everyone is on board, however, according to comments posted online at the county’s engagement hub, which “will be considered,” according to the online call for input.
County officials face a slew of comments that call for traffic lights, not a roundabout, and others that are open to the idea of using a single-lane roundabout to reduce the delay of vehicles on Symmes Road.
“I think this is a fantastic idea to slow traffic at that intersection and handle the multiple left turns from Balm to Symmes and from Symmes to Balm,” wrote one respondent.
“I believe that this proposal would be a nightmare,” added another respondent, who proposed instead that, perhaps, Balm Riverview should be widened to four lanes. “There is way too much traffic backup to support a roundabout.”
One respondent noted concern with “traffic on Balm Riverview Road [that] backs up to Symmes from the lights at Rhodine and McMullen Loop at rush hour, from all the houses put in without the infrastructure to handle the population.”
In favor of a “desperately” needed traffic light at Balm Riverview and Rhodine, one respondent contended “Riverview has become the land of U-turns,” so “let the Symmes traffic that wants to turn left go down the street and do yet another U-turn!”
Indeed, there is a construction project on the books concerning intersection improvements at Balm Riverview and Rhodine roads, which also has been addressed in the county’s engagement hub.
Aimed to reduce traffic congestion and to enhance motorist, cyclist and pedestrian safety, the project includes widening the Balm Riverview/Rhodine roads intersection to add turn and through lanes in both the north- and southbound-directions. Also, to improve the area’s drainage, the project includes installing a stormwater pond at the intersection’s northwest corner.
For sure, engagement hub comments concerning both Riverview road projects give testament to the frustration some residents have about the breakneck growth of south Hillsborough County.
One respondent said that while the single-lane roundabout project at Balm Riverview and Symmes roads is appreciated, the county needs to address “an obscene number of charter schools and new housing developments” that “created the need for this improvement.” 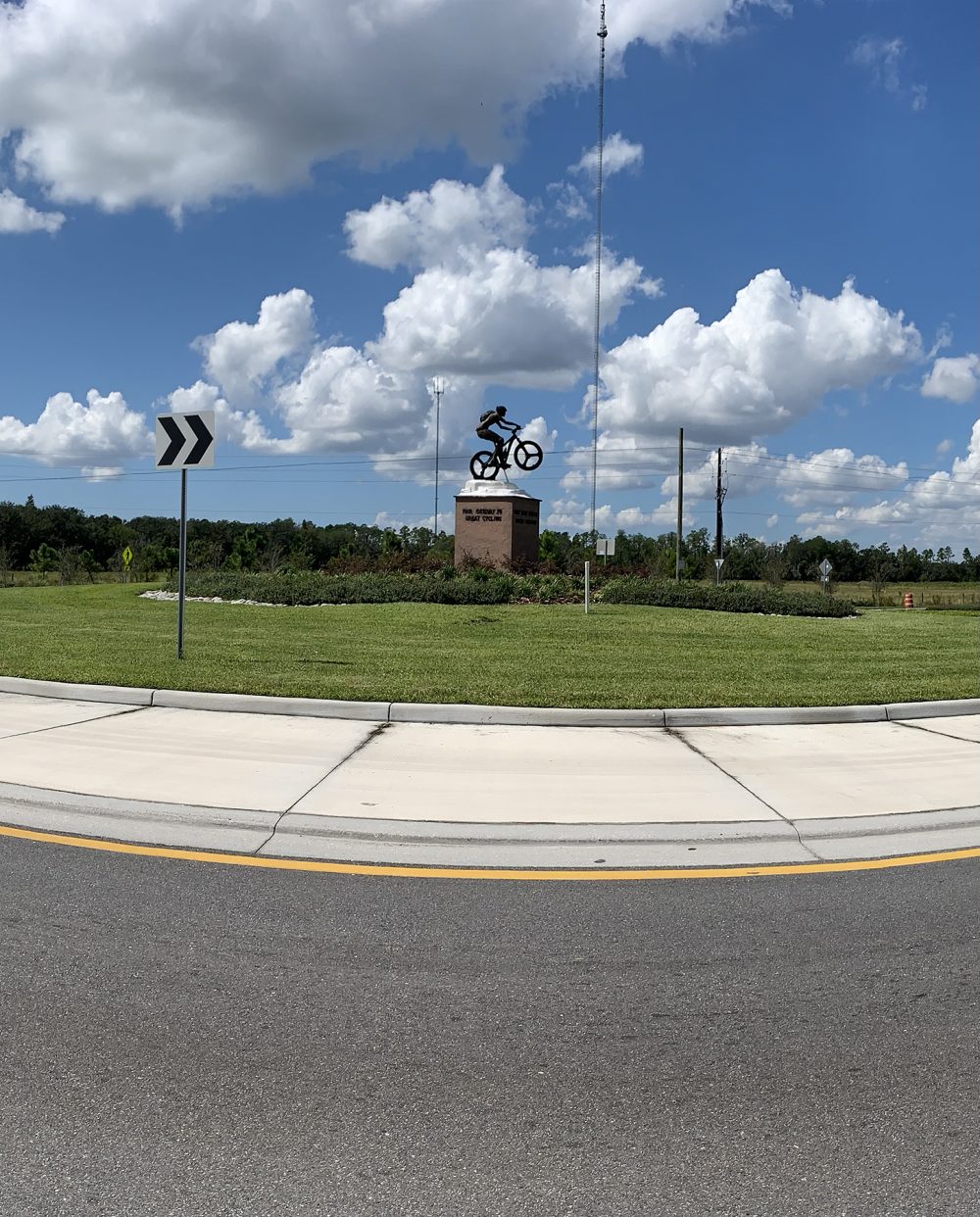 “I’m not against the roundabout or putting a traffic light at the intersection,” wrote one respondent, claiming to live on the east side of Balm Riverview Road. “The traffic on Balm Riverview is 10 times what it was 20 years ago and entering and exiting Balm Riverview from the driveways on the east side has become a dangerous situation.
One respondent in support of the single-lane roundabout at Balm Riverview and Symmes roads, asked for “a nice tree/garden in the center” or a statute to view, especially during sunrise or sunset.
There is precedent for such an action, as the county has given the go-ahead for public art in traffic roundabouts, including for a sculpture of Riverview founder Benjamin Moody at a roundabout on the books for Riverview Drive, near the upcoming Alafia River Park, about one mile east of I-75.
Artwork of a bicyclist at the intersection of Balm Boyette and Boyette roads, outside the Hawkstone master-planned community in Lithia, is yet another example. In coordination with Hillsborough County officials, the statue is in place, reportedly funded by Hawkstone developer, Homes by WestBay.
The WestBay development is one mile south of the bicycle motocross at Triple Creek BMX and about six and 12 miles, respectively, from Balm-Boyette Scrub Nature Preserve in Wimauma and Alafia River State Park in Lithia, both popular destinations for mountain-bike riders.
Visit the Hillsborough County engagement hub at www.publicinput.com/hub/117/.