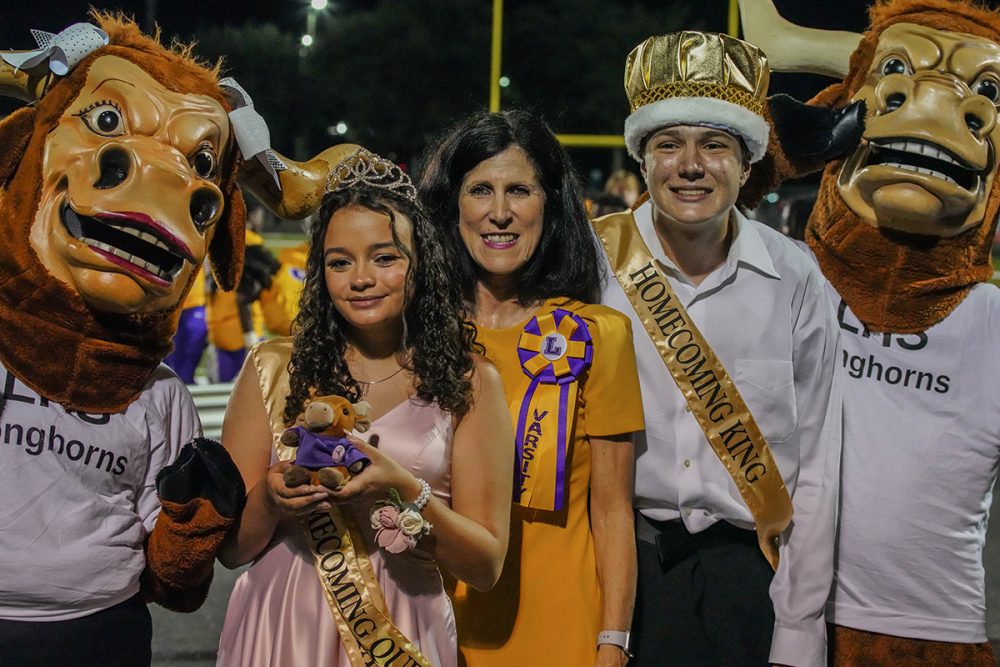 Lennard travels up the road to engage the Riverview Sharks this Friday night. Both teams are desperately attempting to win and to break losing streaks. Riverview is seeking to snap a 3-game skid. The Longhorns are 1-5, not winning since Aug. 27. East Bay is looking to get back on the winning trail. The Indians hit the road Oct. 15 to face 2-3 Palmetto. Spoto visits Robinson High in Tampa after an off week. Coach Alfred Smith’s 0-4 Spartans are still searching for their first win. Sumner is at home, optimistically planning for victory number 5 against Middleton High of Tampa.
Lennard could not hold an early Homecoming lead over Palmetto in the corral. The Longhorns hung on close until collapsing in the second half en route to a 48-13 defeat which was not as bad as the score would indicate.
The Horns received the opening kickoff but could not move the ball. On an attempted punt by Lennard’s Tony Loschiavo, a low snap led to Loschiavo diving on the ball. Palmetto had an early possession inside Lennard’s 5-yard line. On third down and goal, Horns cornerback Jayden Robertson grabbed an interception in the end zone and ran it all the way out to Palmetto’s 34-yard line. After a short drive, QB Gavin Henley hit wide receiver AJ Hill with a 15-yard scoring pass. The two-point attempt failed but Lennard led 6-0. The Palmetto Tigers responded with a scoring drive and a good PAT to take the lead 7-6. The Longhorns QB Henley, however, had his own answer. Henley hit junior receiver Eli Singleton on a 50-yard pass play. Then Henley followed up with a 10-yard slant toss to Singleton for his 6th scoring reception of the season. The PAT by Loschiavo was good. Lennard led 13-7. But then Palmetto struck for a short running score and also a 35-yard TD pass to move it out to 21-13 in favor of the visitors. Following a Palmetto third quarter score making it 27-13 the Horns put together a promising scoring drive in the 4th quarter. However, the Horns hopes were cut short with a Palmetto interception in the end zone. Palmetto tacked on a couple of late TDs to pound the nails into Lennard’s coffin for the night.
East Bay got off to a slow start against the visiting Bloomington Bulls, finally succumbing 29-7. The 3-2 visitors from Valrico found the end zone on all three of their first three drives to make it 22-0 at halftime. A fumble recovery by the Indians Issac Crump in the third quarter provided East Bay with good field position. The Indians star sophomore running back Jaelin Sneed took the pigskin to pay dirt but it was all the scoring the tribe could muster after Nick Linenberger booted the extra. The Bulls held Sneed to 55 total yards rushing on13 carries. Coack Mike Gottman’s East Bay crew had one flicker of a chance midway in the final stanza. East Bay defensive stalwart Trent Cherry picked off a Bulls pass. However the Indians could not turn the possession into a score. Bloomington forced an EB punt which sealed the Indians doom as the Bulls Chrisitan Bodner returned it 45 yards for a TD. The PAT made it final 29-7. Bloomington was paced by QB Charles Coney who went 8 for 12 in the air for 114 yards. Coney was well complemented by running back Brycnn Bennett who tallied the first three TDs and rushed for 73 yards total for the Bulls. The loss was East Bay’s first after losing its Kickoff Classic and winning five straight. East Bay QB Nick Carter passed 11 for 20 for 74 yards and ran 16 times for 53 yards. Vincent Ketchup hauled in 6 passes for 60 yards for EB. 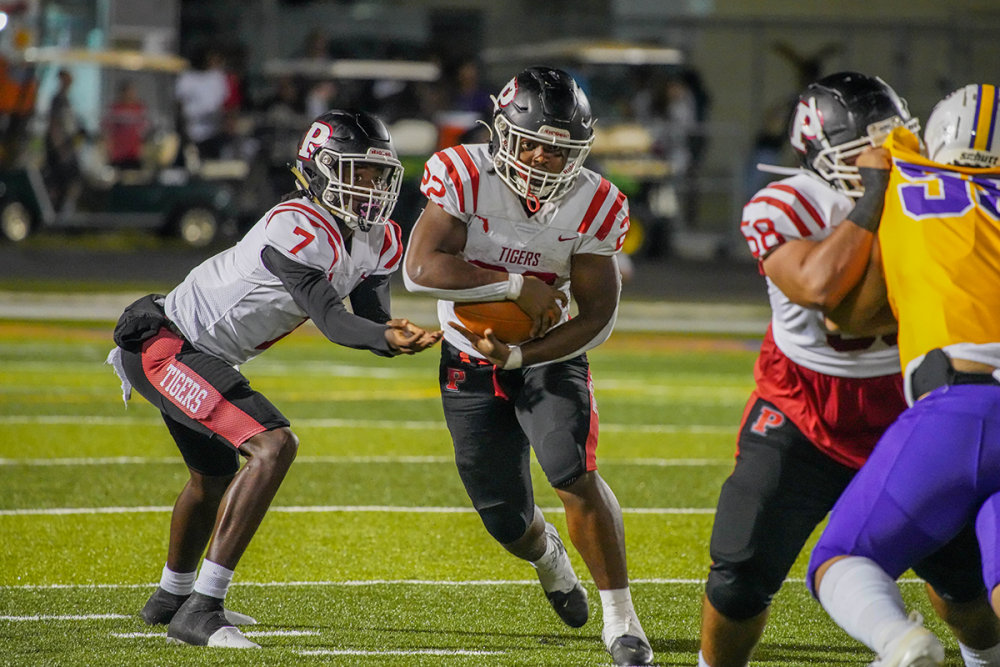 Photo by Rich & Company FL 727-351-2243
Lennard quarterback Gavin Henley in pocket looking for a receiver in loss to Palmetto.

Meanwhile,the Riverview Sharks were victimized 45-13 by the Durant Cougars. For Riverview, it was the third straight loss after opening the season 2-0. Durant was celebrating Homecoming at the east Hillsborough County school. The Cougars rolled up 14 points in the opening quarter and added 28 in the second quarter en route to thrashing the Sharks utilizing a running clock. Marcus Carey picked off a Cougar pass in the second quarter and turned it into a 30-yard pick six. Coach William Mosel’s Sharks only other bright light was a third quarter 15-yard aerial score from QB Colin Larsen to Harrison Hensley.
East Bay student Joshua NeSmith contributed to this report.