By LOIS KINDLE
The SouthShore Chamber of Commerce will host its 2nd Annual Trick or Tee Time Golf Tournament Oct. 23 at Summerfield Crossings Golf Club in Riverview.
And just like last year’s inaugural event, it’s sure to be a spooktacular blast.
“I used to dislike planning golf tournaments but having this Halloween theme has made all the difference,” said Melanie Davis, the chamber’s executive director. “I don’t even have to call people for this one; they call me.
“From start to finish, every moment of Trick or Tee Time is fun. You laugh so much your face hurts,” she said.
Amanda Marrero, owner of Fringe Benefits Salon,
wouldn’t miss this lighthearted event. Last year, she played with a team of girlfriends dressed as Minnie Mouse.
“(Trick or Tee Time) was honestly one of the most fun tournaments I’ve ever played in,” she said. “The theme was so unique. I loved it. 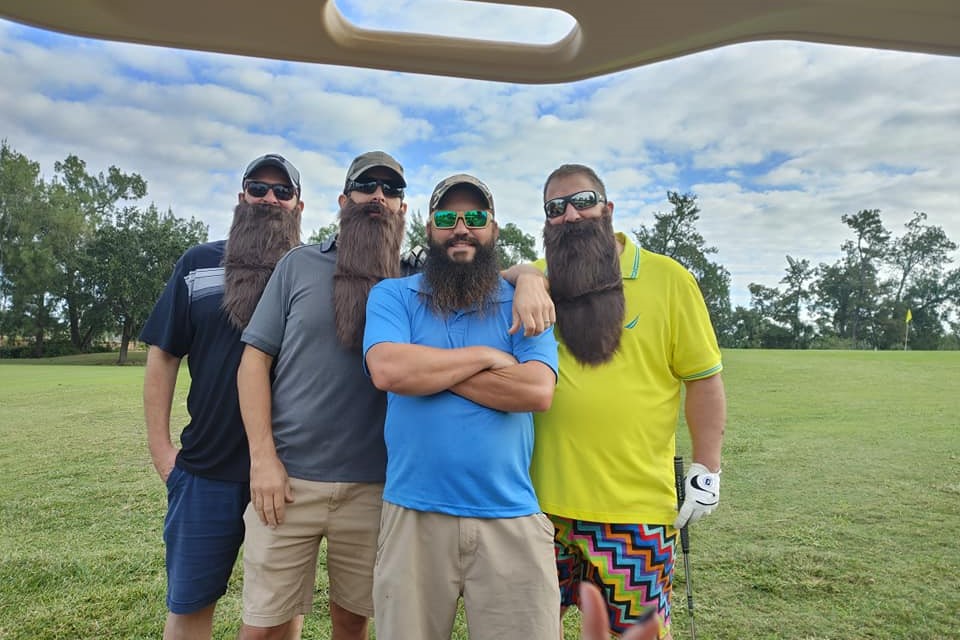 COURTESY PHOTOS
Members of the East Coast Pizza team at last year’s inaugural Trick or Tee Time Golf Tournament surprised Josh Ricard, foreground, by showing up in fake beards that mimicked his real one. They were a huge hit that day. From left are Mike Cummings, Aaron Fredricks, Ricard and Jason Fredricks.

“It’s fun, laid-back and noncompetitive,” she added. “It’s all about having a good time.”
Registration for the event is at noon, the shotgun start at 1 p.m. Entry is $100 per person, which includes golf fees, cart, snacks, lunch, water and adult beverages on the course. Play is open to all area golfers.
Many of the holes will have themed games hosted by sponsors, like “Putting into a Pumpkin.”
Prizes will be awarded to 1st-, 2nd- and last-place teams and for an array of golf contests, including shot closest to the hole, longest drive and more. There’s also a prize for best costume (optional). “You don’t have to wear a costume, but why not?” Davis said. “It makes the tournament more of a hoot.”
Take last year’s tourney, for example.
Davis’ significant other, Josh Ricard, was playing on the East Coast Pizza team, and his three team members told him they didn’t want to dress up. When he arrived at the tournament, his friends were wearing long, fake beards mimicking Ricard’s real one, which Davis said was hysterical.
“They looked like members of ZZ Top, Duck Dynasty or a group of terrorists,” she said, laughing. “They were a huge hit.”
Sponsorships for this year’s tourney are available for area businesses to promote themselves and support the tournament of up to 36 foursomes. Costs and benefits of the various sponsorship packages are available on the chamber’s website at www.southshorechamberofcommerce.com.
Thus far, some of the Tombstone Hole Sponsors, for example, include charter boat Capt. Lorie Deaton for Hooked on Hope, Freedom Boat Club, Zipperer’s Funeral Home, Cigars on the Boulevard, Roots Southern BBQ, Fringe Benefits, Hillsborough Community College – SouthShore Campus, Circles and Land’s End Marina. 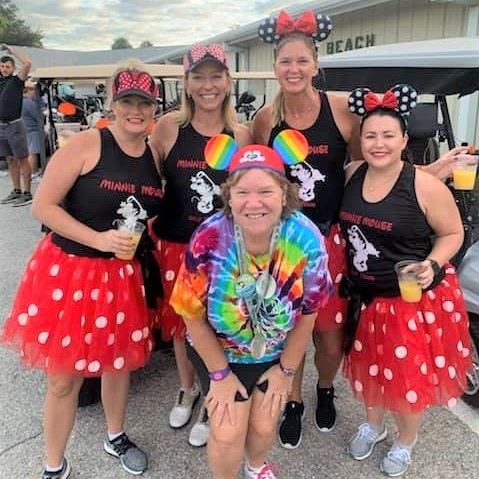 Team Minnie Mouse poses for a group photo at the 2020 Trick or Tee Time Golf Tournament, which it won for best costume. (Costumes were optional.)

The registration form can also be downloaded on the website.
All checks should be made payable to the SouthShore Chamber of Commerce and returned in person or mailed to the chamber at 201 W. Shell Point Road, Ruskin, FL 33570.
All proceeds will benefit the chamber’s community outreach efforts, including its Homeless Initiative, Military Affairs Outreach and Educational Partnership.
“We’re all set to have a blast again this year,” Davis said. “So if you’re ready for a great day of golf and lots of laughter, come join us!”
For more details on the 2nd Annual Trick or Tee Time Golf Tournament or to RSVP to play, call 813-645-1366.