East Bay won its fifth straight, 41-7, last Friday. Coach Mike Gottman’s Indians shook off an early, and only, score by Spoto. In other limited South Shore high school gridiron action, Sumner was tagged at home with a 22-15 loss by Plant High. Both 2-2 Riverview and Lennard had off last Friday night. 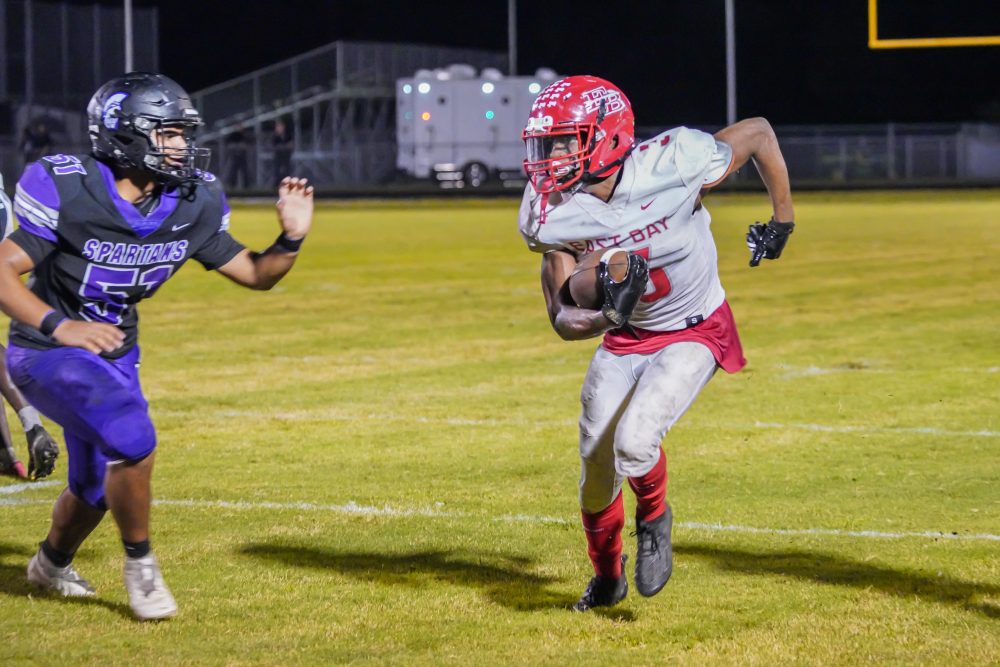 Four of the five South Shore teams play this Friday night with the exception of 0-5 Spoto. The Spartans have a bye and travel to Robinson High Oct. 8. East Bay hosts perennial power Bloomington Oct. 1. East Bay’s only loss this season was the 41-0 drubbing at the hands of the Lakeland Dreadnaughts in a Kickoff Classic in late August. According to the Florida High School Athletic Association, “Fall classics are not considered in regular season rankings.” However, Kickoff Classics are considered part of the season won/loss marks. Lennard, whose lone win was over Braden River High in its Kickoff Classic, gets back in the fray, welcoming 1-3 Palmetto to Ruskin Friday evening. Sumner treks to play Southeast High in Bradenton. Riverview has the task of facing Durant on the road in East Hillsborough County.
East Bay continued its relentless ground attack and tough defense at Spoto Stadium. Now, the competition gets somewhat tougher. Coach Jacob Coulson’s Bloomington Bulls bring a 2-2 mark to Big Bend Road. Last week, under the Florida lights, Spoto scored first but left too much time on the clock for the EB comeback. The Spartans of Coach Alfred Smith went up 7-0 in the first quarter as Najee Dade scored on an 18-yard pass play from Cameron Rogers. From then on, the Ketchup brothers and James Thompson sparked an offensive onslaught that Spoto could not deal with. On the other side of the ball, it was also all East Bay. The Indians stymied Spoto by holding the Spartans to 103 yards total offense. Aggressive EB also intercepted a pair of Spartans passes and registered seven tackles for losses. 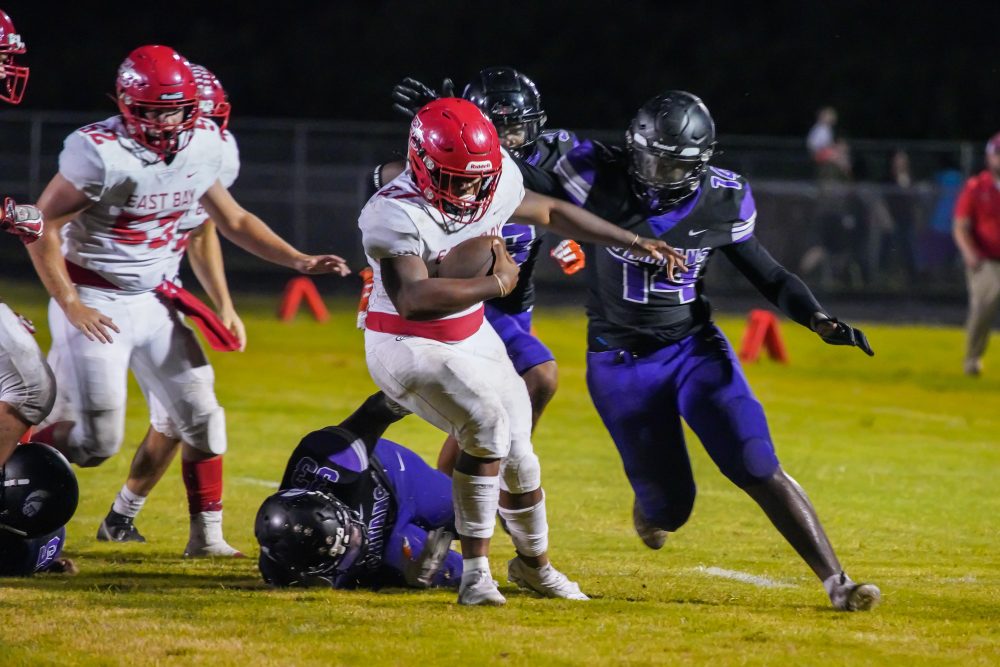 Indians first-year head Coach Gottman was pleased with the effort and is looking forward to the visitors from Valrico this Friday. “It’s always great to end the night with a win,” said the veteran coach. “I loved how physical we were. Now things get serious with the big district home game against Bloomingdale.”
Coach Gottman received the usual offensive performance from running back Jaelin Sneed. The super sophomore answered Spoto with a six-yard scamper to the end zone. Nick Linenberger booted the first of EB’s extras, which he repeated until a missed PAT on the Indians’ final score in the 4th quarter. EB’s Vincent Ketchup took off on a 48-yard TD jaunt in the 2nd quarter. Indians QB Nate Carter set that one up with a 25-yard pass play to Armone Bostick. Vincent Ketchup ran in from 42 yards prior to the half to provide East Bay with a 21-7 insurmountable lead. Carter and James Thompson collaborated on a 22-yard pass in the 3rd quarter to extend the EB margin. Then Izaiah Ketchup found the end zone on 12-yard reverse later in the 3rd. Thompson visited the end zone on an 11-yard run for the second time in the 4th stanza to seal the game for EB.
Lennard has sustained four losses after registering a 21-16 win over Braden River in an August Kickoff Classic. Now, the Longhorns face the 1-3 Palmetto Tigers in Ruskin. Coach Matt Kitchie and his Longhorns have a chance to post their second victory of the season after some tough competition. Palmetto also plays in District 11. The Tigers have not done too well record-wise or statistic-wise. They have scored 59 points and coughed up 88. Last week, Palmetto fell 42-10 to powerhouse 4-0 Venice. The starting quarterback for Palmetto is freshman Zander Scott. Scott has thrown two TDs in the last three games. Lennard counters with veteran QB Gavin Henley, who has hit 45 of 111 passing for 745 yards and 10 TDs. Henley has been intercepted four times. Henley’s favorite targets are Eelijah Singleton and Ha’keem Monroe, both with five receiving scores. On defense, the Longhorns have received good play from Jacob Treese, Dominick Murphy and Braylon Henry among others. 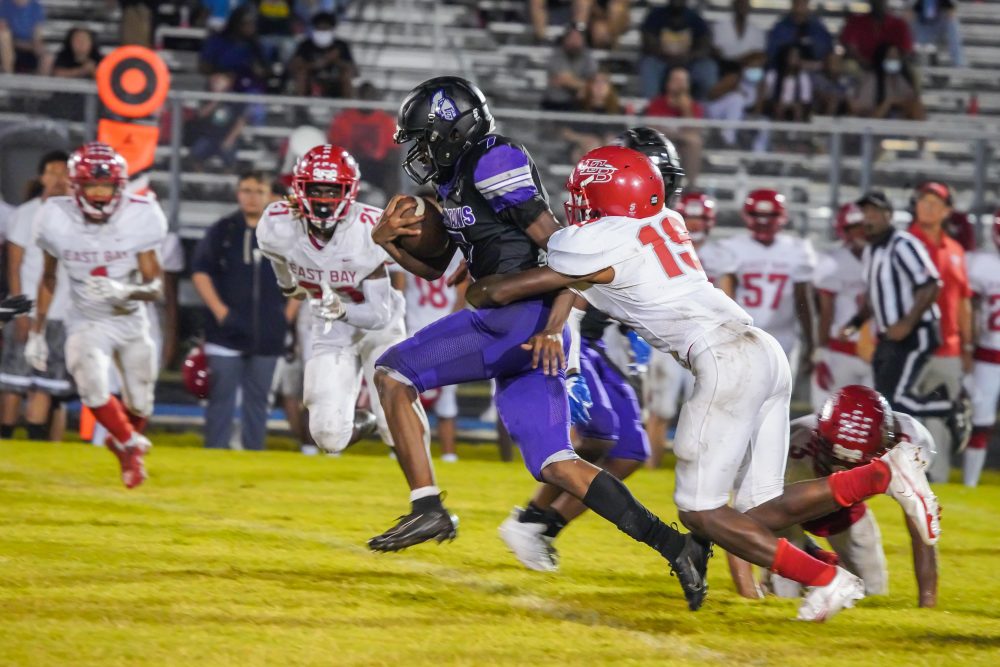 Coach William Mosel and the Riverview Sharks are looking to regain their bite. After winning its Kickoff Classic, the Sharks won two more. But now the Sharks will be challenged to find a win at Durant, which sports a 4-1 worksheet. The Sharks are 3-2 and have scored 70 points and given up 57, including their 22-0 Kickoff Classic victory over weak Spoto. 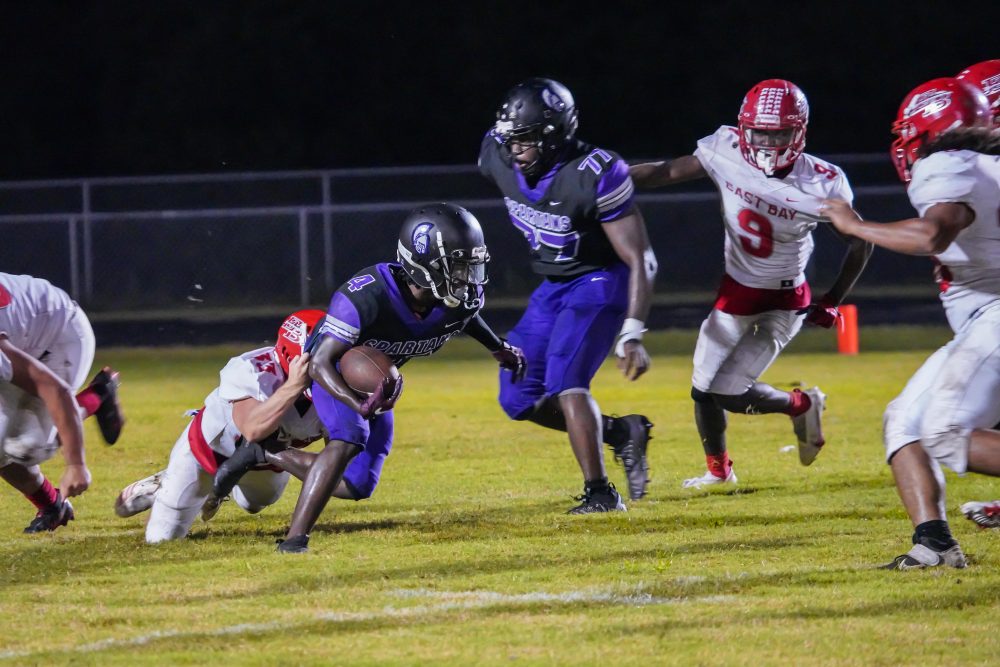