Earl Lennard’s roots and impact as a farmer, teacher, superintendent of schools, supervisor of elections and Hillsborough County Fair president took center stage at the Harvest Awards ceremony last week, where the Riverview resident, born in Tampa, received this year’s Harvest Awards Posthumous Memorial Tribute.
“I’m fairly certain there’s no one in this room who doesn’t know Earl,” said Pam Walden, who before presenting the award reflected on Lennard’s life and decades-long impact on agriculture, education and community service.
A rousing round of applause confirmed Walden’s contention from attendees gathered at the 20th annual Harvest Awards ceremony, which is staged hours before the start of the Hillsborough County Fair at the Hillsborough County Fairgrounds in Dover. 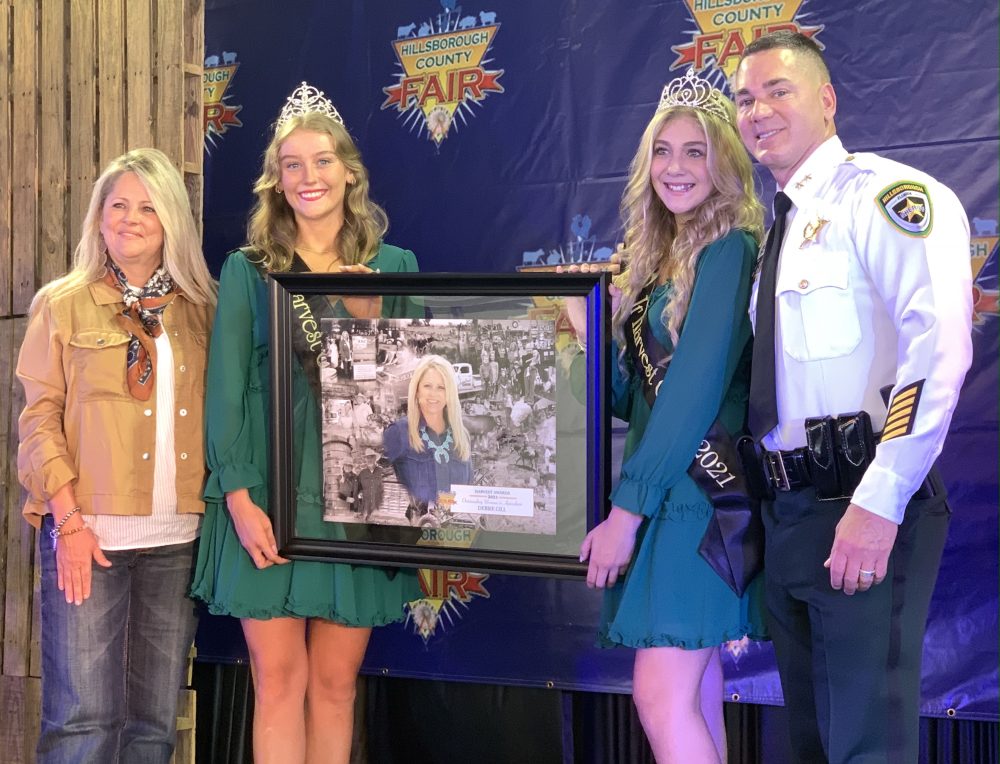 “We appreciate so much the award in my father’s memory,” said Missy Lennard, principal of Dick Stowers Elementary School in Lithia, who attended the Sept. 23 ceremony with her son, Riley Shields, and her mother, Annabel Lennard. “We miss him terribly, but we are just so thrilled that his memory is being kept alive.”
Lennard, the namesake of the high school in Ruskin, died Dec. 23, 2019, after being hospitalized with a prolonged illness since Thanksgiving 2018. He was 77.

One of nine siblings, Lennard worked on his family’s farm and tended to its vegetable stand. He entered the Hillsborough County school district as a first-grader at Palm River Elementary and left almost 60 years later as its superintendent of schools, a position he held from 1996 to 2005. He taught fifth-grade at Ruskin Elementary; history and agriculture, at East Bay High; and served also as deputy superintendent and assistant superintendent for both administration and for vocational, technical and adult and community education.
“Agriculture was in his blood,” said Walden, who was Hillsborough County’s first female supervisor of agriculture and ROTC programs. She retired in 2018 after more than 40 years as a school district employee. 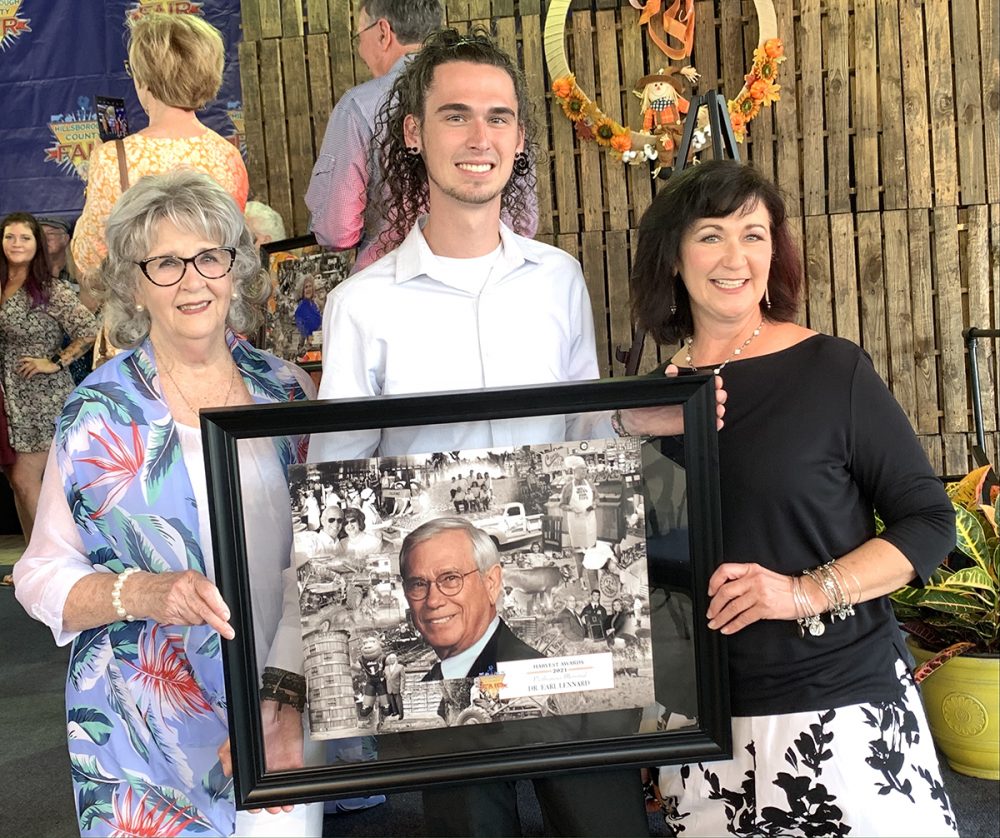 Missy Lennard spoke to her father’s love of both farming and teaching.
“I remember waking up in the cabin of the truck at the Farmer’s Market many, many times,” she said. “Washing squash in the bathtub of the barn and all of the great memories growing up on a small farm while my dad was teaching.”
Farm memories burned bright for all Harvest Award recipients, including fourth-generation farmers, Glenn and Frances Williamson, who took home the 2021 Harvest Award for Farm Family of the Year. 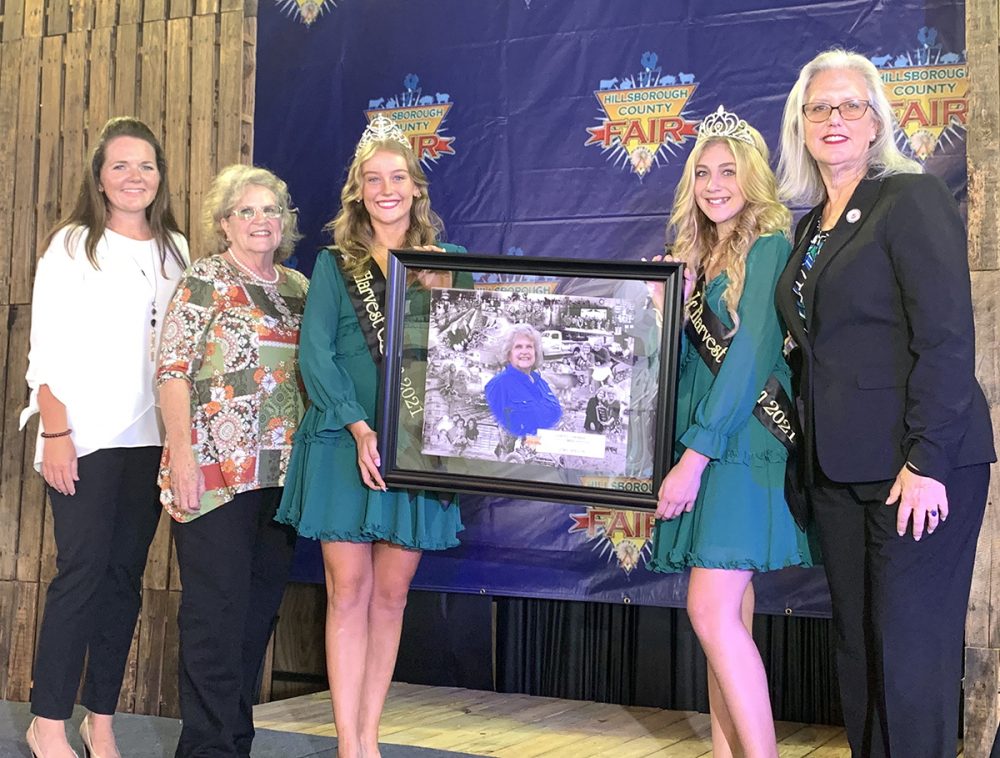 According to their award bio, the couple married in 1952 while still attending Turkey Creek, then a high school. They started their farming life together on 13 acres, given to them by Glenn Williamson’s father. Retired today from day-to-day operations, Glenn and Francis, nevertheless, produce 88 acres of berries under G&F Farms and FranBerry Farms, as well as 60 acres of blueberries and 750 acres of strawberries under Florida Pacific with partners Kim Stickles and Garland and Miles Reiter.
Jemy Hinton received her second Harvest Award, this time for lifetime achievement. In 2003 she received the Harvest Award for Outstanding Woman in Agriculture and 16 years later was named Ag Educator of the Year. Hinton started her career in 1972, working at the UF/IFAS Strawberry Lab in Dover as the center’s first biologist. Among her accomplishments, Hinton co-owned and operated a production plant nursery and served both as a 4-H extension agent and environmental specialist with the Florida Department of Environmental Protection.

This year’s Outstanding Woman in Agriculture Harvest Award went to Debbie Gill, owner and operator of Lonesome G Ranch in Fort Lonesome, a family and commercial cattle operation that spreads across multiple counties. Along with her husband Anthony and their children, the family hosts a Florida U-Pick Peach Orchard and “Farm to Table” tours on their L.G. Ranch. The family has created scholarships and beef shows in memory of their son and brother, Justin Gill, who died in a truck accident on Fort Lonesome Road while a student at Durant High. 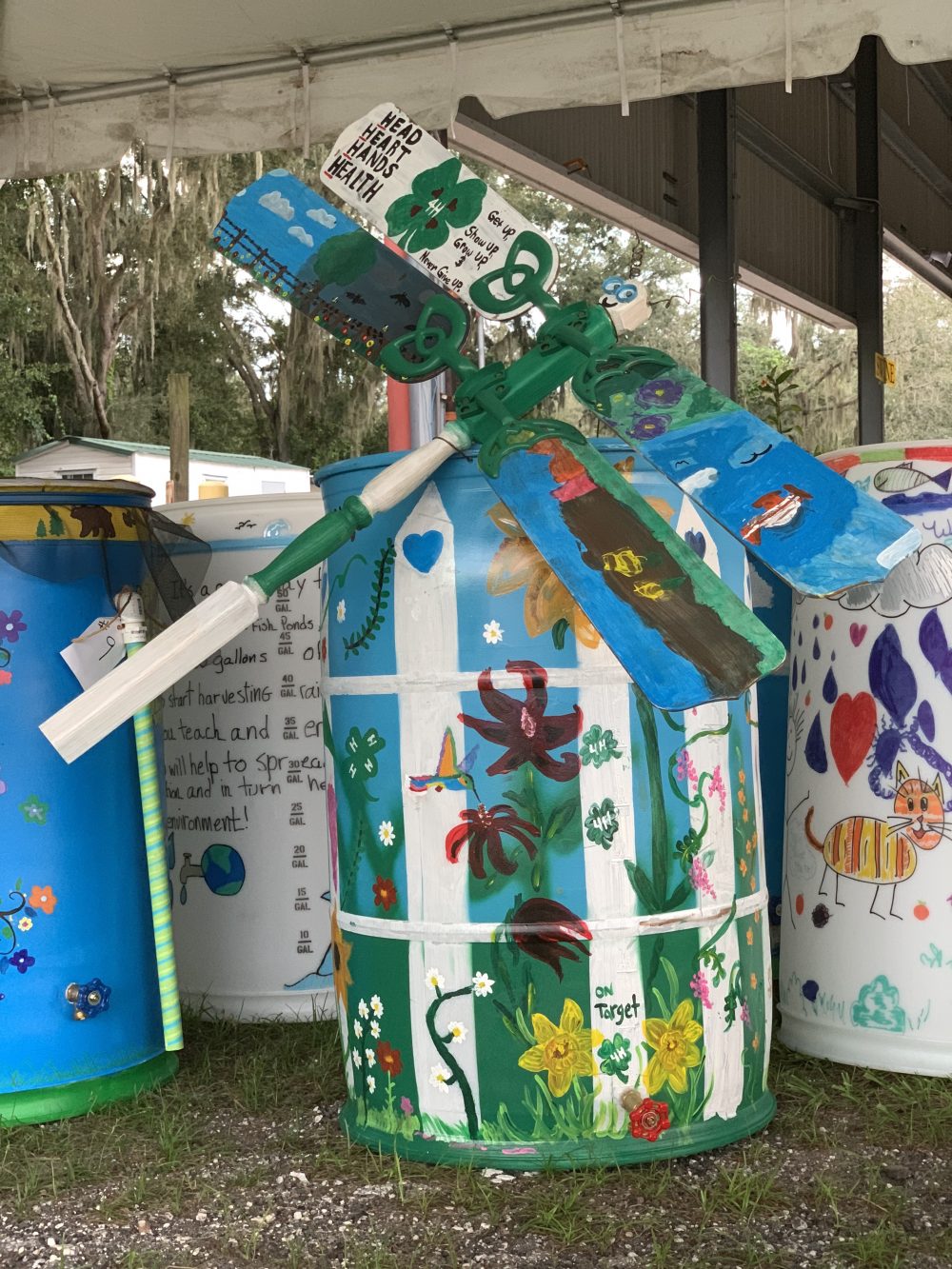 Placing first in the first annual Hillsborough County Fair Rain Barrel Decorating Contest is this entry from Donna Holt on behalf of her 4-H club members.

The SouthShore Chamber of Commerce, under executive director Melanie Davis, received the Outstanding Public and Community Service Harvest Award for the chamber’s “willingness to step into the lives of others and give to those in need.” Among its accomplishments, the chamber was noted for its annual Migrant Graduate Banquet and for raising $10,000 “to add color, excitement and inspiration to the playgrounds of Gibsonton and Reddick elementary schools, both Title 1 schools.” 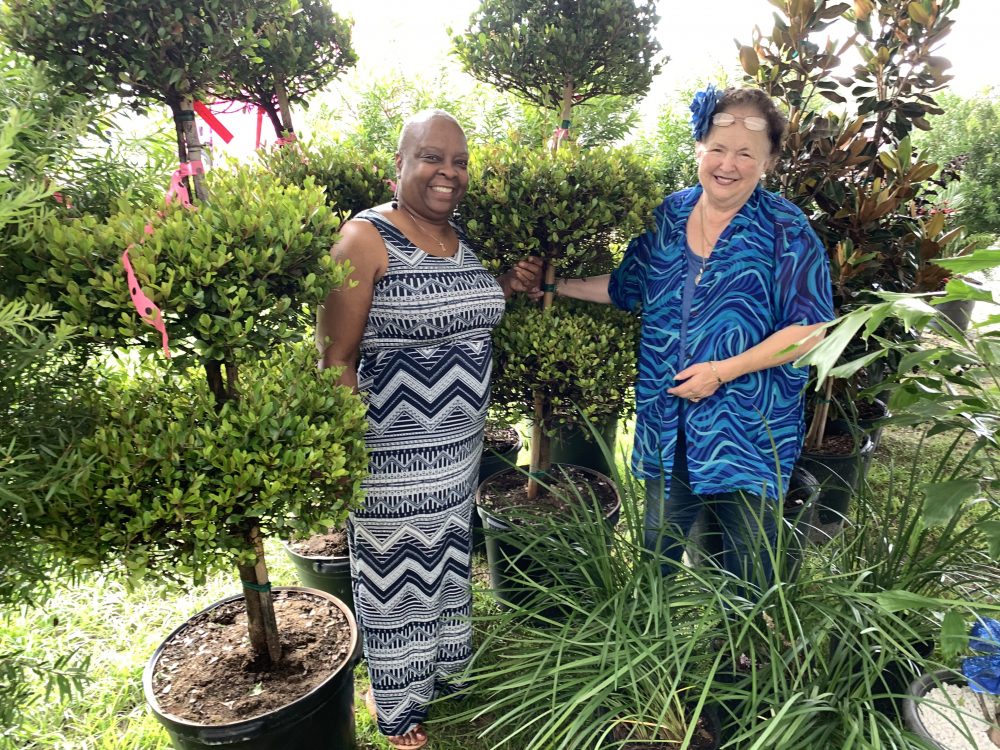 Sonja B. Brookins, Hillsborough Soil and Water Conservation District supervisor, left, with Betty Jo Tompkins, HSWCD executive director, standing among some of the plants and trees set for the Oct. 3 plant auction at the Hillsborough County Fair. Live and silent auctions will be held as well for rain barrel contest winners and entries.

Rounding out the tributes, Matt Parke received the Harvest Awards Young Farmer nod. A fourth-generation farmer, Parke hails from the Roy Parke family, namesake of Parkesdale Farms in Dover. The younger Parke also owns and operates CenFlo Organics, which grows organic strawberries; sits on the board of the local USDA Farm Service agency; and works with UF/IFAS Extension and research centers.
“I hope that my granddad’s looking down and he’s proud of me right now,” Matt Parke said. “I don’t consider farming work. I consider farming love.” 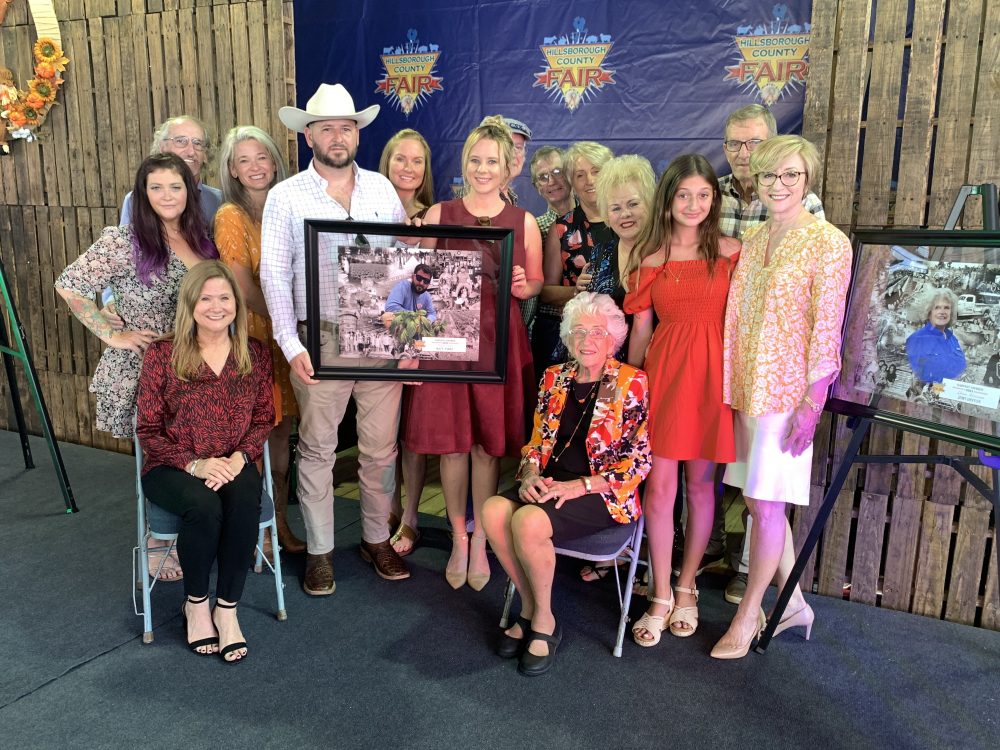 As for what Earl Lennard would be thinking looking down on the Harvest Awards ceremony and his posthumous recognition, his wife had a ready answer.
“He would be very humbled,” Annabel Lennard said. “He was always so appreciative of everything he had and got to do. He was just Earl.”