Sept. 9 was a special day for the Bob’s Vets group. After its weekly breakfast gathering at Bob Evans in Ruskin, about 30 of them made their way to the Veterans Memorial in Sun City Center to witness their “brick” being laid in the memorial’s 7,000-brick foundation. Prior to the installation, Walt Cawein, president of the SCC Charitable Foundation, talked about the impressive Eagle monument and other features at the site. He said that since the memorial was established three years ago, about 1,100 engraved bricks honoring veterans have been purchased. 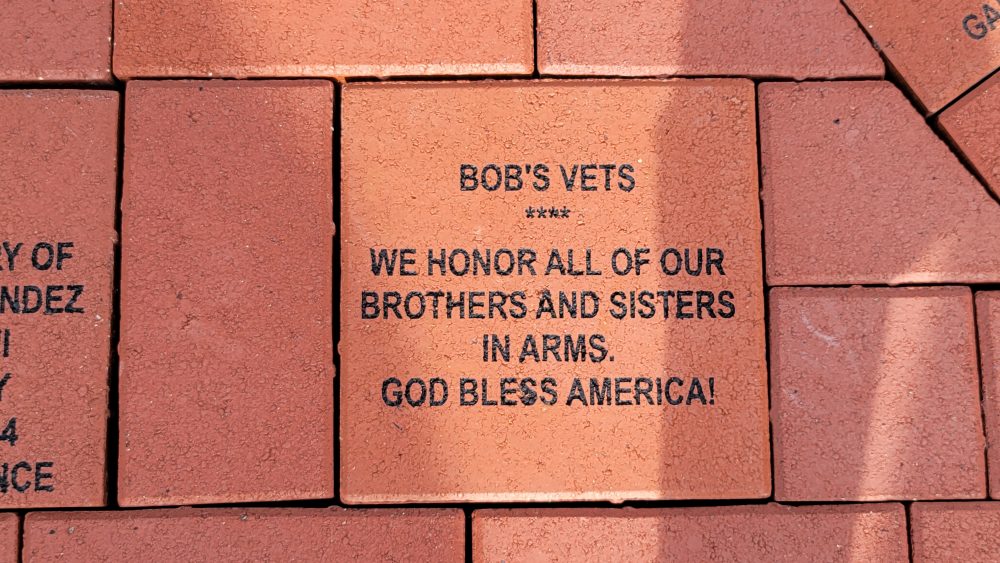 Bob’s Vets were the first group to contribute to the Centenarian Veterans Fund that buys 8×8 bricks.

He thanked them for their brick purchase and also for their contribution to the foundation’s recently established Centenarian Veterans Fund. Bob’s Vets were, in fact, the first group to contribute to the new fund that buys 8×8 bricks ($215) for each centenarian veteran brought to the foundation’s attention.
The Bob’s Vets military group was started six years ago by Terrill Dossey, now deceased, as a loosely organized gathering where veterans can share in the fellowship and commonality of others who have served. There are no membership dues and no official membership list except for a newsletter email list. Evidently, many veterans appreciate this opportunity to mingle with fellow vets since attendance ranges from 40 to 60 in the summer and as high as 100 when part-time residents are here in the fall and winter.
Bob Lucas, a former U.S. Army medic, is representative of the attendees. He learned of the group a few months ago and comes regularly for social interaction with fellow area vets. His wife Ottilie now joins him. Lucas is using his passion for patient care as an EMT volunteer with the SCC Emergency Squad.
Each meeting has a program led by Dean Johnston, Steve Browning and Bill Hodges that focuses on information that can affect veterans’ lives. Among the topics on September 9, for example, was a new option for vets to connect with therapists/psychologists when struggling with dementia, depression, etc. The free program was just recently started at My Warrior’s Place in Ruskin. Also, Lynne Conlan, South Hillsborough Chamber of Commerce director, was at the meeting to tell the group about the upcoming “Honoring Our Heroes” golf tournament at Club Renaissance October 15. 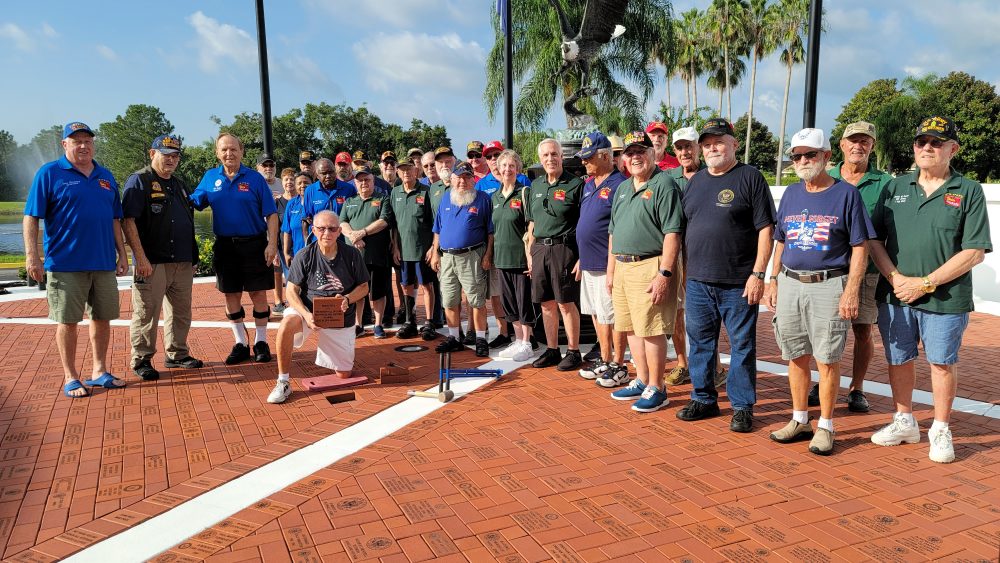 PHYLLIS HODGES PHOTOS
After the September 9 Bob’s Vets meeting at Bob Evans (Ruskin), some of them joined Walt Cawein at the SCC Veterans Memorial to watch installation of the foundation brick they had purchased.

In some instances, guests are there simply to listen. For instance, State Representative Vern Buchanan, who is very involved with veterans’ affairs, sends his field representative to the meeting monthly to hear concerns direct from the veterans.
The restaurant staff starts seeing the veterans arrive around 7 a.m. for breakfast and some social time before the program starts at 8 a.m. Bob Evans manager, Othiniel Romero, enjoys seeing the group get together each week, having such a good time. They are a jovial group, and he is happy that Bob Evans can provide a place that they can gather.
For more information on Bob’s Vets, call Dean Johnston 734-787-0928.
Questions about the SCC Veterans memorial? Email walt.cawein@gmail.com.