June 2 was like any other day for Steve Caneen, of Sun City Center. He went for a two-mile walk with his wife Debbie, had breakfast and then headed off to a consulting job for Vadnais Trenchless at Port Tampa.
As he was talking on site with Dan Veillette, its general superintendent, Caneen became extremely dehydrated and went into cardiac arrest. In other words, he experienced an abrupt loss of heart function, breathing and consciousness.
Luckily for Caneen, Veillette immediately started CPR (cardiopulmonary resuscitation) and continued it for 11 minutes until paramedics arrived. 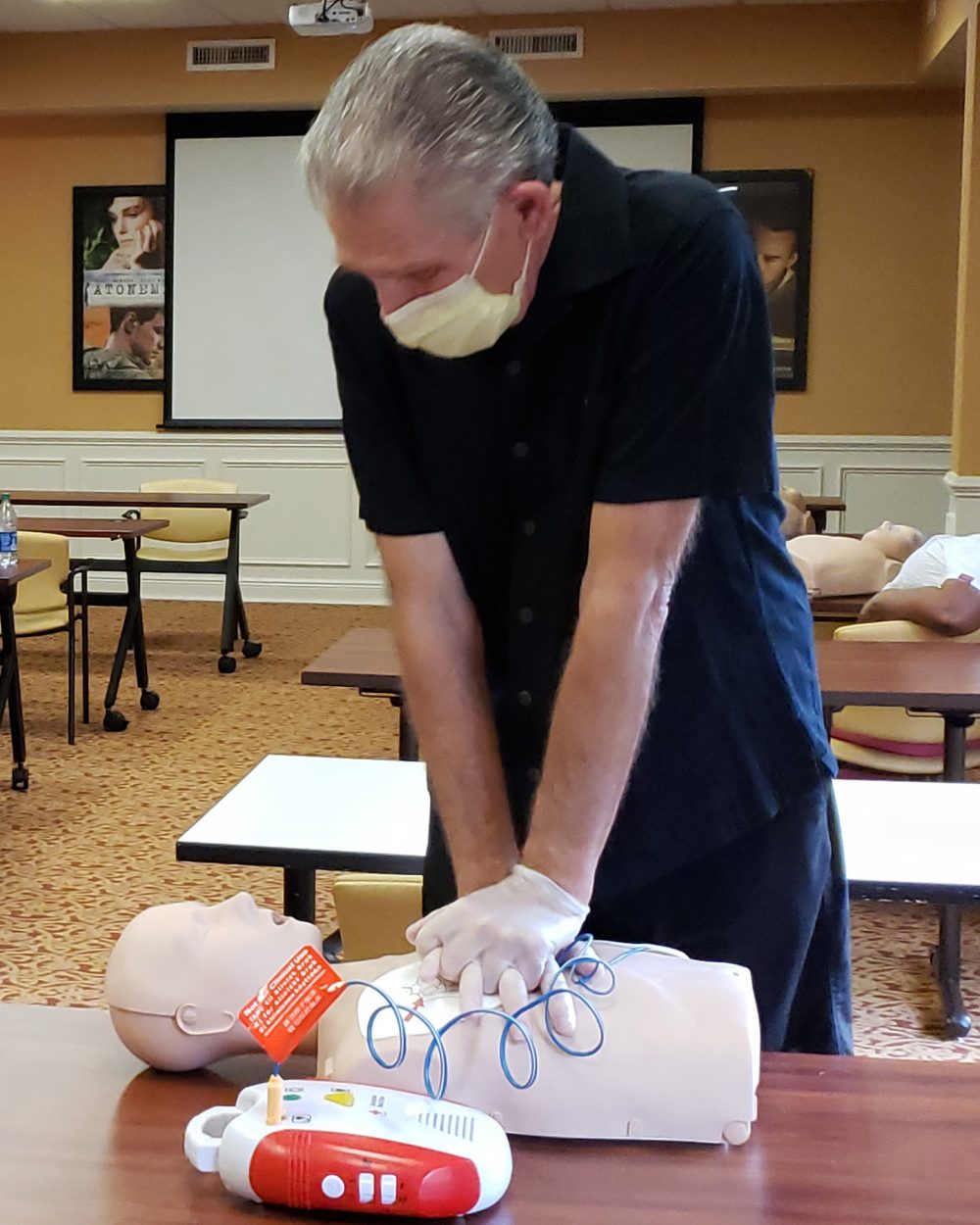 “I was standing right next to Steve, when it happened, and he went down,” Veillette said. “I rolled him over on his back and found he had no pulse. I began applying CPR (chest compressions and breaths). I’d always had the training and renewed it every three years, but I’d never done it before.”
Veillette thought Caneen was dead by the time emergency personnel took over.
“I thought what I’d done was all in vain,” he said.
“On the way to Tampa General Hospital, Caneen was paddled three times by paramedics before he came back to life,” his wife said. “Clinically, he was dead, but thanks to Dan, he didn’t lose any brain function.” 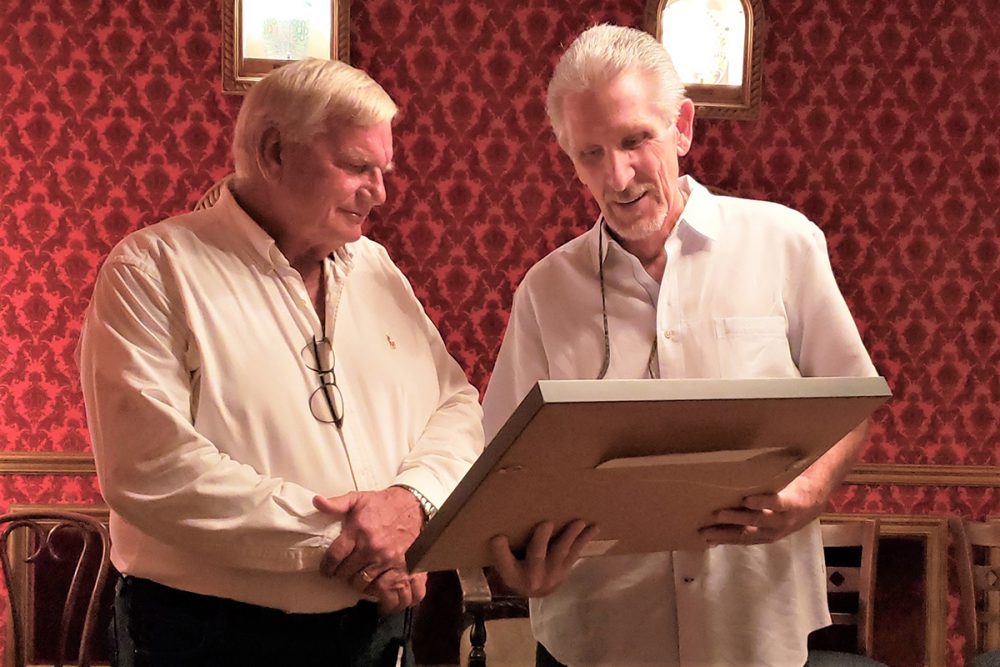 On Aug. 31, Steve Caneen, right, presents an American Heart Association HeartSaver Award to Dan Veillette at the Columbia Restaurant in Ybor City in appreciation for the latter’s lifesaving application of CPR, when Caneen collapsed during cardiac arrest

Veillette efforts helped a small amount of blood to continue to flow to Caneen’s heart and brain until professional help was on-scene.
According to the American Heart Association, almost 90% of people who have cardiac arrests outside of a hospital die. Caneen was fortunate.
He spent 21 days in Tampa General’s ICU and two more weeks in inpatient therapy before being released. Now back home, he’s undergoing outpatient physical and occupational therapy at Sun Towers Rehabilitation Center in Sun City Center.
“I don’t remember anything from that day whatsoever,” Caneen said.
All he knows is, thanks to Dan and his wife’s advocacy for him at the hospital, he’s alive and well. He recently took part in a CPR class at Sun Towers as a way to give back. 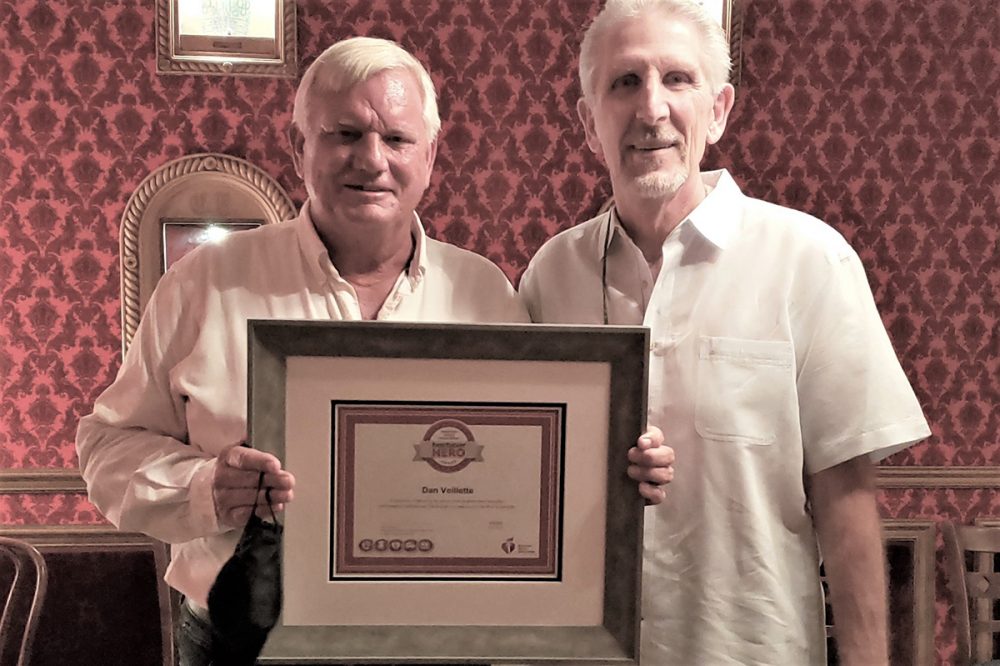 “I did it to honor Dan and, God forbid, have the ability to pay it forward if anyone ever needed my help,” he said, adding the majority of cardiac arrests and the need for CPR occur in the home.
Caneen acquired an American Heart Association Heart- saver Hero Award and had it framed to present to Veillette in person. (The award is for bystanders who successfully perform CPR.)
The two men met for dinner Aug. 31 at the Columbia Restaurant in Ybor City with their wives and other personnel from Vadnais Trenchless. 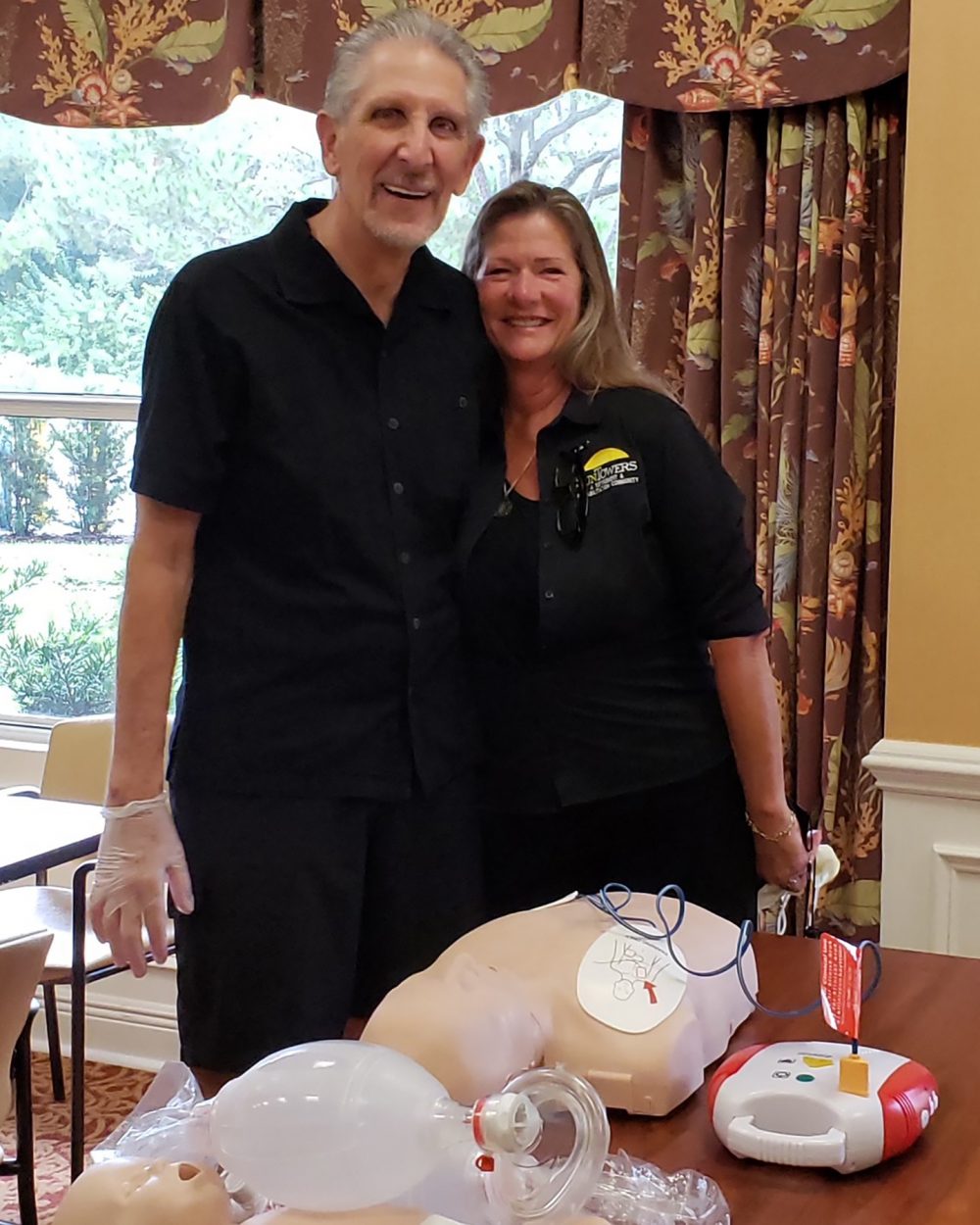 Steve Caneen is shown here with his wife Debbie, whom he also credits with saving his life by advocating for him during his five-week stay at Tampa General Hospital after his June 2 cardiac arrest.

“I just wanted Dan to know, if it wasn’t for him, I wouldn’t have survived,” Caneen said.
“To be honest, I was shocked,” Veillette said about receiving the award. “It meant a lot to me. (Due to their shared experience), we now have a special bond.”