Lennard, Riverview off Friday after losses

The East Bay Indians beat Alonso High, 15-14, for its fourth straight win of the football season last Friday night. Also winning, in a different manner, were the Sumner Stingrays, 41-12, over the Spoto Spartans (see separate article in this week’s Observer News.) The Lennard Longhorns dropped their fourth straight, 35-21, at Bloomingdale. Rounding out South Shore high school football, the 2-2 Riverview Sharks dropped their second straight to undefeated Plant City.
East Bay, under new Coach Mike Gottman, travels to Spoto Sept. 24 for a big chance to grab victory number five of the season versus the winless Spoto Spartans of Coach Alfred Smith. The Riverview Sharks have an off Friday this week. The Sharks host tough Durant Cougars Oct. 1. Coach Alonzo Ashwood hopes to keep Sumner’s hot streak alive when his team hosts 3-0 Plant High of Tampa. Lennard, 1-4, has an open week until Oct. 1, when 1-2 Palmetto visits Ruskin.
East Bay combined the rushing of stocky sensational sophomore Jaelin Sneed, the passing of big junior QB Nate Carter, the field goal kicking of slight senior Nicholas Linenberger on offense and a super tough defense to claim the close victory at home over the 2-2 Alonso Ravens of Tampa. 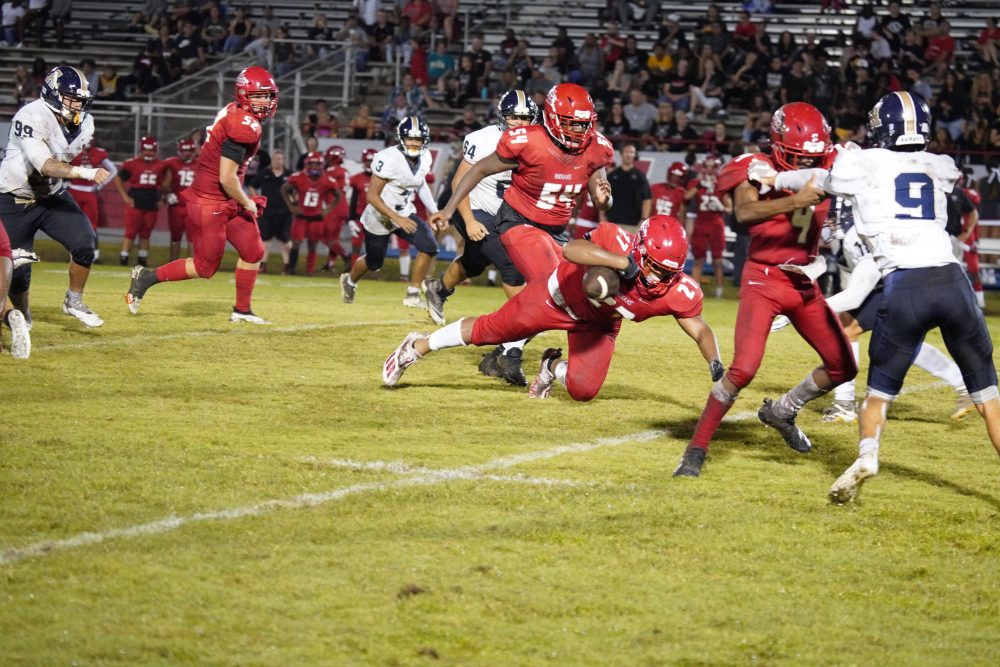 richandcompanyfl.com photos
Jaelin Sneed, #27, had another big night rushing for the Indians in a 15-14 Alonso victory. Blocking for Indians included juniors #52 James Jarboe and #54 Dutravious Broadway.

Linenberger put the Indians on the scoreboard early. East Bay ran the ball consistently on its opening drive, setting up Linenberger’s 26-yard field goal. The bullish running of Sneed extended EB’s 3-0 lead before a happy home crowd. Sneed rammed the pigskin into the end zone from six-yards out, late in the 2nd quarter. The PAT attempt was no good, and EB led 9-0. Then Alonso blocked an EB field goal attempt with less than a minute in the first half. The visiting Ravens made it a game by kicking the extra and trailed only 9-7 at half.
Alonso put a scare into the Indians by scoring again on a 5-yard run, late in the 3rd quarter. The Ravens kicked the extra to take a 14-9 lead. With the 3rd quarter about finished, Indians QB Carter hit Aiden Showers with a 16-yard TD pass. The conversion failed, but EB took back the lead, 15-14. The scoring pass to Showers was Carter’s only completed pass of the game.
The 4th quarter turned into a defensive struggle. With four minutes remaining in the contest, EB punted to Alonso. The big D of the Indians exhibited its muster and denied any more scoring from Alonso.
East Bay Coach Gottman commented, “We showed toughness and resiliency tonight. But we have to put it all together as we get close to district play.”
Lennard, under head coach Matt Kitchie, traveled to Bloomingdale, looking for its first win since the August Kick-off Classic over Braden River. The Longhorns fought the 2-2 Bulls, but did not possess enough rushing strength or defense after coming back to tie 21-21 in the 3rd quarter.
Trailing on a wet and sloppy field, 21-0, in the first half, Lennard utilized the clutch scrambling and passing of senior QB Gavin Henley to cut it to 21-7 at the half. Henley, who hit 17 of 39 pass attempts for 219 yards and three TDs in the game, found junior Eli Singleton for the Horns’ only first half score. Tony Loschiavo added his first of three PATs.
The Longhorns showed their determination by scoring again early in the second half. On Bloomingdale’s first drive of the half, linebacker Braylon Henry forced a fumble, which was recovered by Lennard’s outstanding senior defensive back and wide receiver, Ha’keem Monroe. On fourth and long, Henley found Monroe for a 47-yard TD reception, bringing the Horns closer at 21-14.
Lennard was not done. On Bloomingdale’s very next offensive series, Horns defensive end Jacob Treese sacked the Bulls’ QB, leading to a punt. Once again, faced with 4th down and long, Lennard’s QB came up big. The senior QB hit Singleton with another TD scoring aerial, a 35-yarder. The PAT kick made it a new game at 21-21. 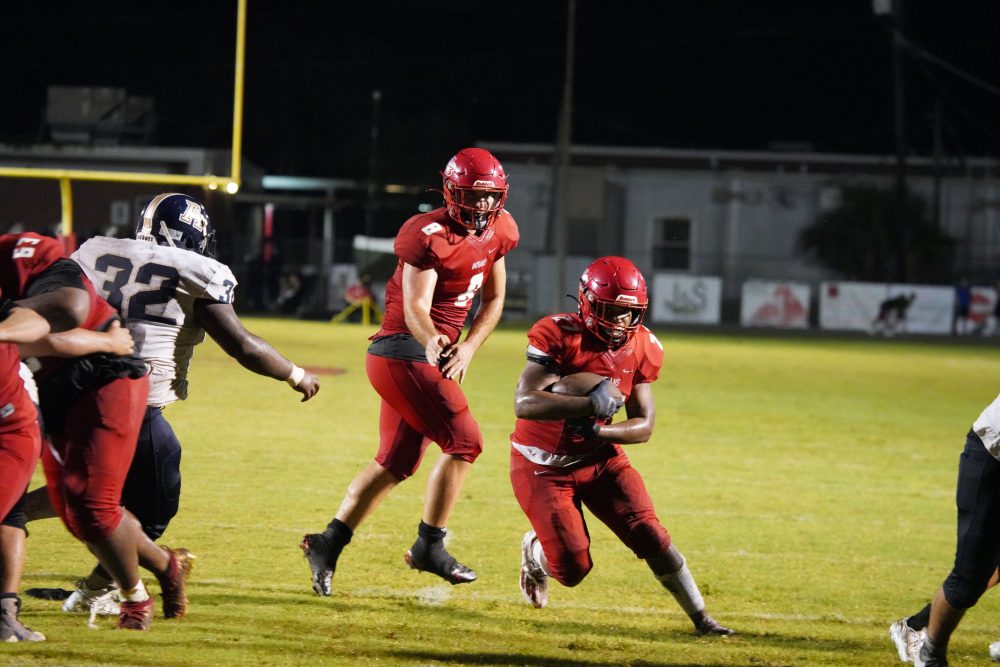 richandcompanyfl.com photos
East Bay workhorse running back Jaelin Sneed, #27, plowed ahead against Alonso. The soph had 138 yards rushing and a TD on 14 carries. Indians QB Nathan Carter, handing off in photo, had a good night, running 13 times for 109 yards and completing a pass for the winning score.

The Bulls, however, had an answer. Pounding its ground attack, Bloomington regained the lead for good 28-21 with a two-yard TD rush. Lennard tried to come back. The Bulls bent but did not break, stopping the Longhorns late on fourth down and five. With only 17 seconds left in the game, the Bulls hit on a long scoring pass to make the final 35-21 in a game much closer than the score indicated.