Home Headlines Patriot Day remembrance looks back at Sept. 11 and its aftermath
HeadlinesNews

Patriot Day remembrance looks back at Sept. 11 and its aftermath

They came to remember and respect the civilians and first responders who witnessed first-hand the devastating destruction of the 9/11 terrorist attacks and the country that forever changed that fateful day.
Saturday marked the 20th anniversary of the Sept. 11 attacks, which found firefighter Sean Brown from New York in attendance at the Hillsborough County gathering, where the Sgt. Walter P. Ryan Detachment 1226, Marine Corps League of Riverview ended the festivities with a rifle salute and Taps. 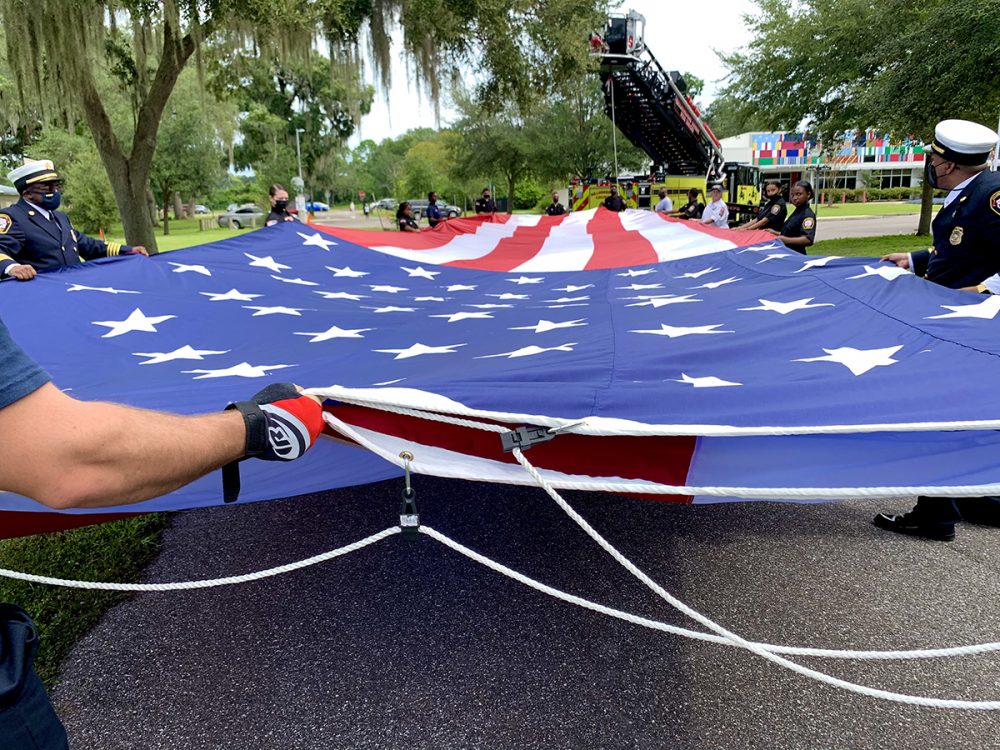 The unfolding of the larger-than-life flag took many hands to take down, unfold and pack away.

Before the music of mourning signaled the end of the 20th Anniversary Patriot Day Remembrance at Veterans Memorial Park and Rear Admiral LeRoy Collins Jr. Veterans Museum in Tampa, event speakers recounted where they were when the Pentagon burned, the north and south towers of the World Trade Center collapsed and the crew and passengers of United Airlines Flight 93 crashed into a field in Shanksville, Penn. 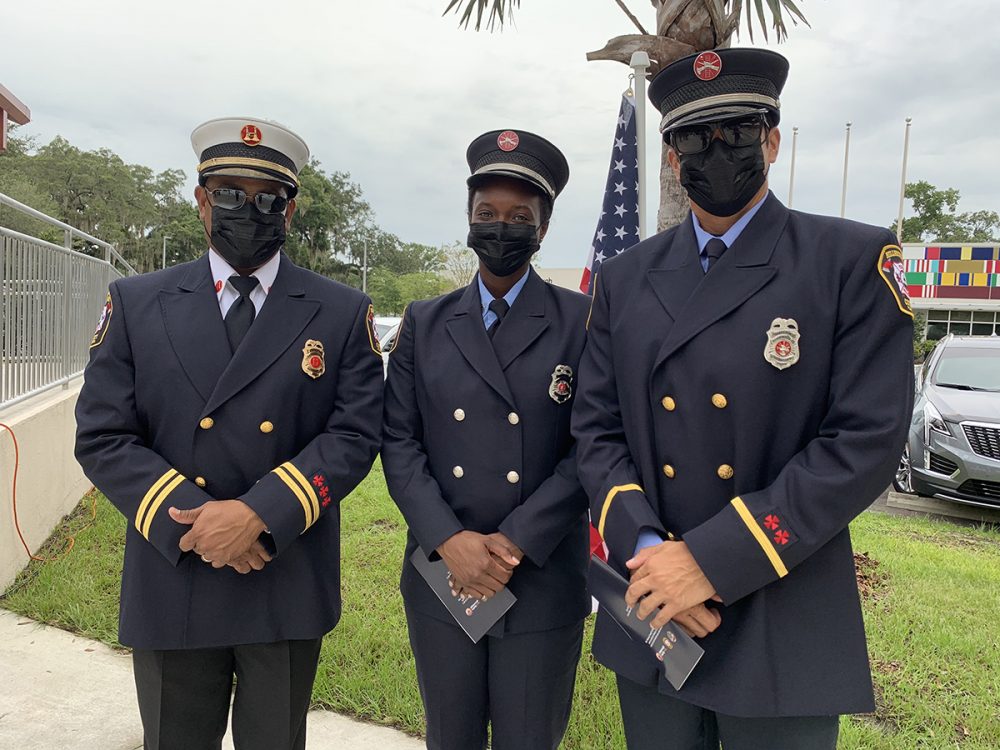 The theme for this year’s Patriot Day and National Day of Service and Remembrance is “Always in Our Memory.”
“At this moment 20 years ago, our country and our world were changed forever,” said guest speaker Col. Jason L. Loschinskey, commander of the 6th Mission Support Group at MacDill Air Force Base in Tampa. “September 11 is a day we will never forget.”
For Brown, a New York City firefighter, assigned to Engine 16 Ladder 7 in the East Side of Manhattan, the day started as his night shift was ending. 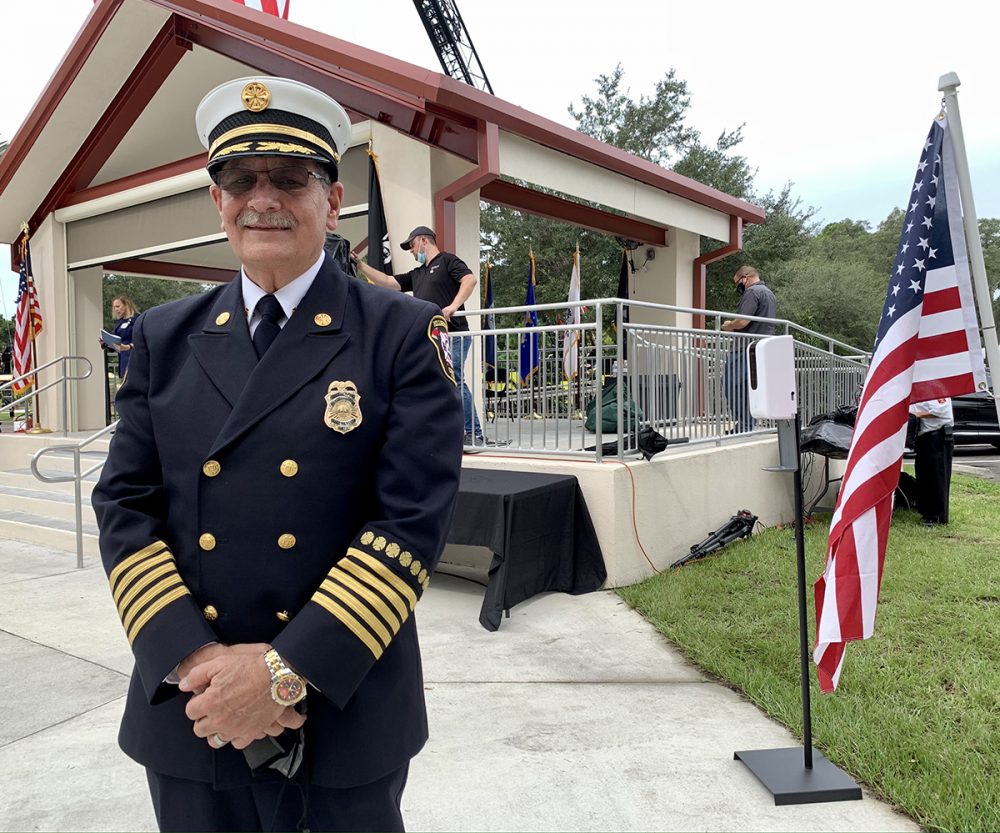 “My boss comes up to me and says a plane just hit the North Tower of the World Trade Center, put your gear on; we’re going,” Brown said.
Entering the North Tower, they looked up and saw “people still sitting in the seats of the plane, dead,” Brown said. They saw “bodies hitting the ground all around us” and “the whole plane coming through” the south tower. They felt the North Tower rock as the South Tower collapsed. 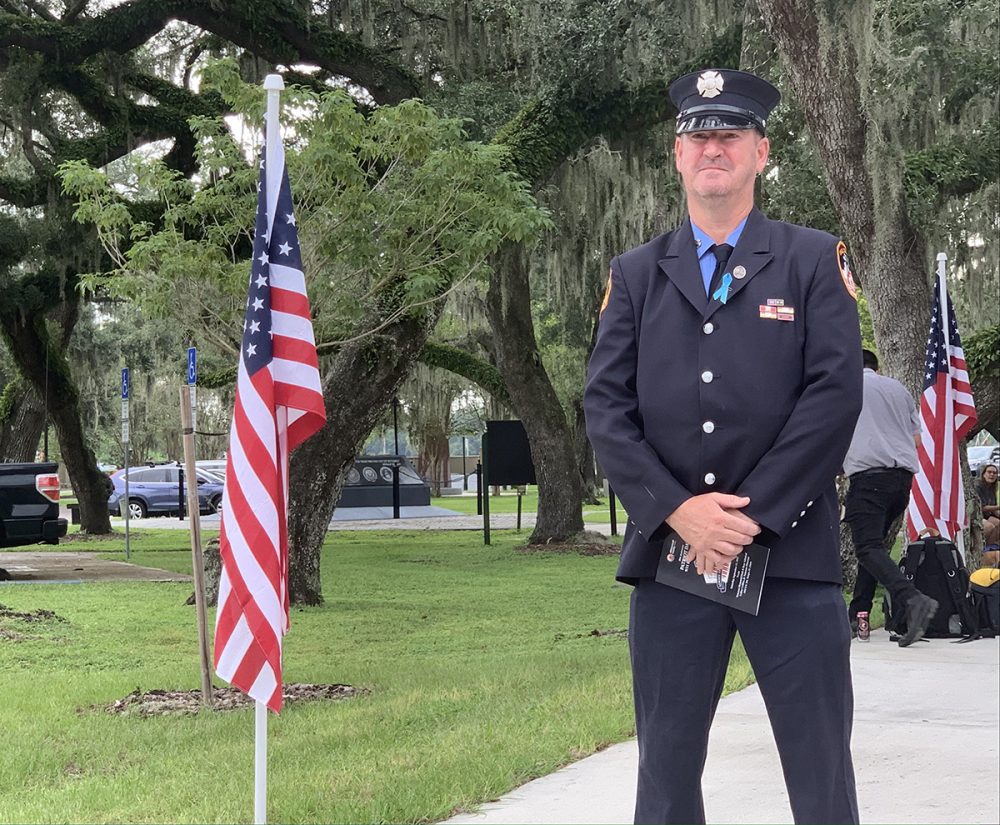 Sean Brown answered the call of duty Sept. 11, 2001, as a firefighter assigned to Engine 16 Ladder 7 in the East Side of Manhattan. He sports a campaign ribbon that bears the number 343, symbolizing the ultimate sacrifice of 343 firefighters, and two stars, symbolizing the survivors.

“At one point we were thinking we might not make it, but at that point we were in the thick of it,” Brown said, recounting what he called a surreal experience. “People were panicking and other civilians were helping them out. Civilians were stepping up. They were breaking into soda machines, giving us water and soda, whatever they could give us. I still remember walking up the stairs and an older woman gave me her turkey sandwich.”
Service above self played a critical role that day, which injured more than 6,000 people and left emotional scarring for a nation under attack.
“Many of our local bravest and finest were inspired to serve following that selfless rush into the towers that day, or to recommit to their service, and we’re grateful for that,” said U.S. Rep. Kathy Castor (D-Fla.), a Patriot Day remembrance speaker. 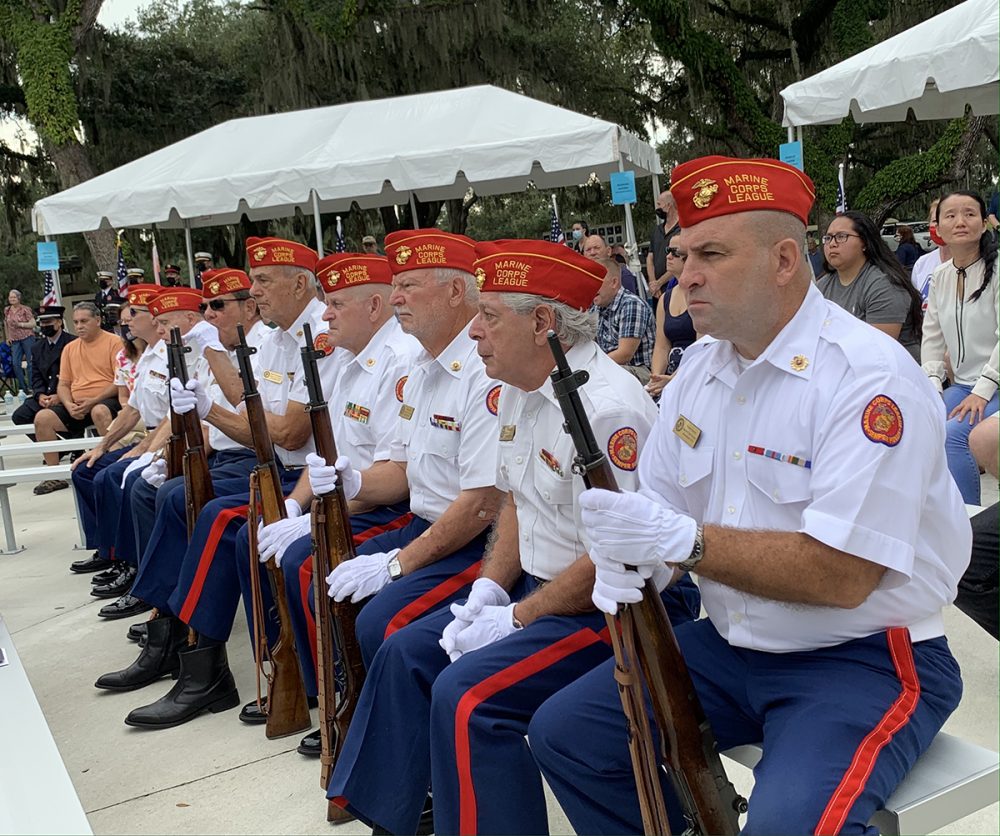 In his remarks, Hillsborough County Commissioner Harry Cohen said one of the most difficult things to do during a time like 9/11 is explaining to children what’s happening.
“I remember the words of Mr. Rogers from the television show,” Cohen said. “He said you should always look around. In any situation there will be people who help. Look for the helpers.”
“On this day, countless acts of heroism, camaraderie, bravery, sacrifice and patriotism” come to mind, said Col. Loschinskey, as does “the memory of the 2,977 innocent victims who died in the twin towers, Pentagon attacks and the thwarting of a fourth attack on Flight 93.” 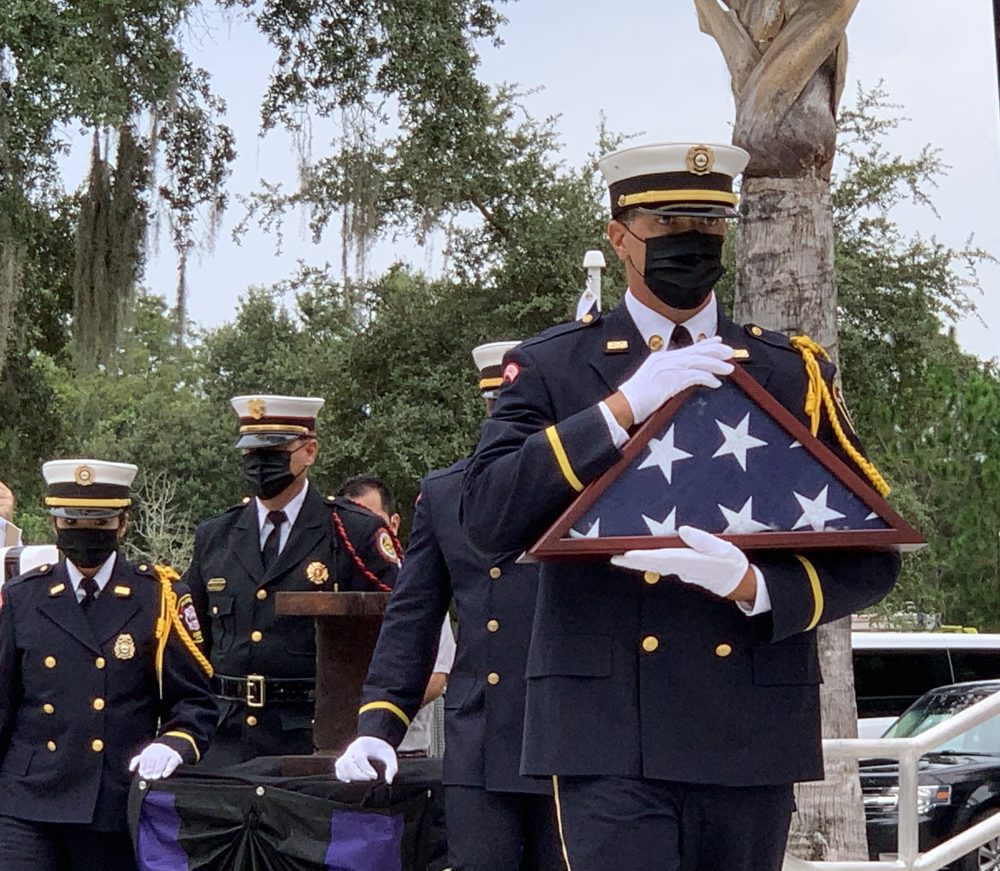 Photos by Linda Chion Kenney
The procession of the section of beam recovered from the ashes of the World Trade Center attacks Sept. 11, 2001: the beam is on display at the Veterans Memorial Park and Rear Admiral LeRoy Collins Jr. Veterans Museum in Tampa, at 3602 U.S. Highway 301 in Tampa.

“It is vital that we remember those who sacrificed their lives on 9/11 and those who fought to eliminate terrorism in the decades since then,” Loschinskey said. “To date, 4,431 in Iraq and 2,455 in Afghanistan who made the ultimate sacrifice.”
In his remarks, Dexter Barge, assistant county administrator, remembered serving on the security detail for President George W. Bush, who was in a reading seminar with students at Emma E. Booker Elementary School in Sarasota when White House Chief of Staff Andrew Card whispered into his ear, “A second plan hit the second tower. America is under attack.”
“The time between the first attack and the collapse of both World Trade Center towers was 102 minutes,” said County Administrator Bonnie Wise, another Patriot Day speaker. “That’s about the average length of a movie, except that it was very real, and our whole world changed as the events of the day unfolded.” 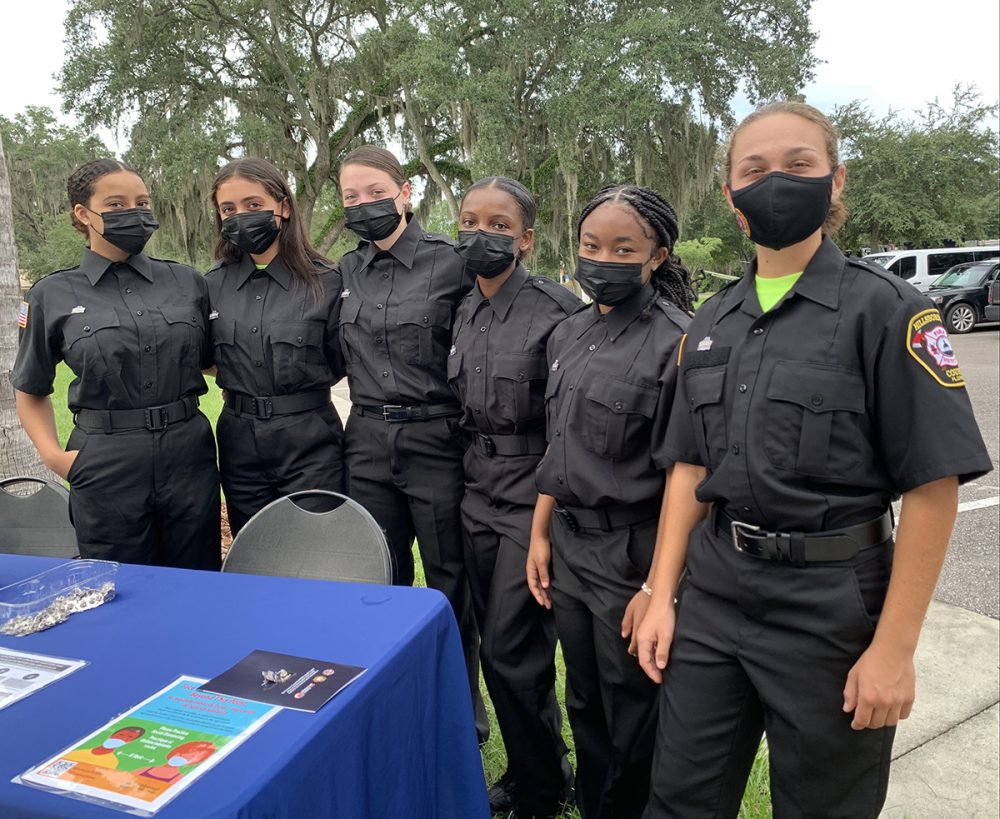 Reading the 9/11 Writ, a chronological recounting of the day’s unfolding events, were Ian Kemp, David Burnett and Dennis Jones, fire chiefs, respectively, of Temple Terrace, Plant City and Hillsborough County fire rescue.
The Patriot Day remembrance included also a procession of the beam section from one of the towers and a bell ceremony, headed by Hillsborough County Fire Rescue Captain Brian Muldowney, to honor the lives lost on Sept. 11. Muldowney’s brother, Richard T. Muldowney, who, like Brown, also served with FDNY Ladder 7, died on duty at Ground Zero. 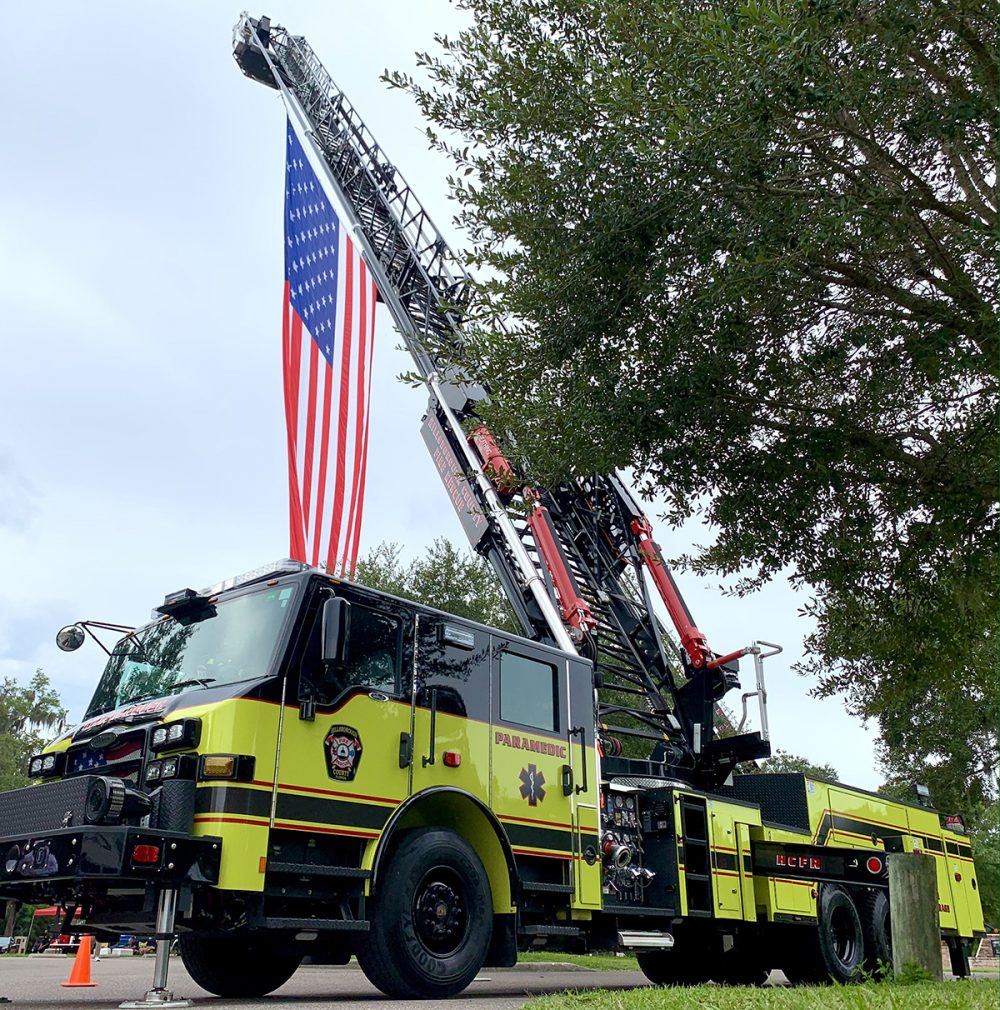 “Never forget,” Brown said, when asked what he would like the community to remember about that fateful day 20 years ago. “Hold your family members a little closer, be kind to people and just remember those who made the ultimate sacrifice.”

CHAMBER NEWS & VIEWS No is an acceptable answer