The Alonzo Ashwood led Sumner High School Stingrays returned home to win their home opener over the Brandon High School Eagles, 75-0. Sumner bounced back in a big way after a tough road loss at Durant last week. The Stingrays are now 1-1 in the early season.
Sumner didn’t waste any time, getting its first score coming off of a fumble recovery that put them in great position to start the scoring. Stingray junior QB Greg Smith III opened the scoring on a 14-yard touchdown run in the first minute of the game. Sumner would score four more times in the first quarter. Stingray junior RB Kylen Webb accounted for two of those four first quarter scores with runs of 15- and 22-yard sprints. Stingray Senior RB Justin Mitchell would add another rushing touchdown of two yards in between Kylen Webb’s scores. The defense was stout on this night, holding the Brandon Eagles to one yard passing, and Brandon’s rushing game was pushed backward all night and was negative 19 yards rushing.
The Stingray offense exceeded its first quarter four touchdown effort with five more touchdowns in the 2nd quarter. QB Greg Smith again opened the quarter, but this time he generated scoring in the air, connecting with Manny Noesi on a 25-yard completion for the touchdown and followed that up with another running TD of two yards. Justin Mitchell added a 22-yard rushing touchdown with JR running back Nicolas Gaines scoring on a one-yard dash. Sumner junior Keoni Denny scored when he scooped up a Brandon fumble recovery and returned it for the final touchdown of a nine touchdown first half for the Stingrays. 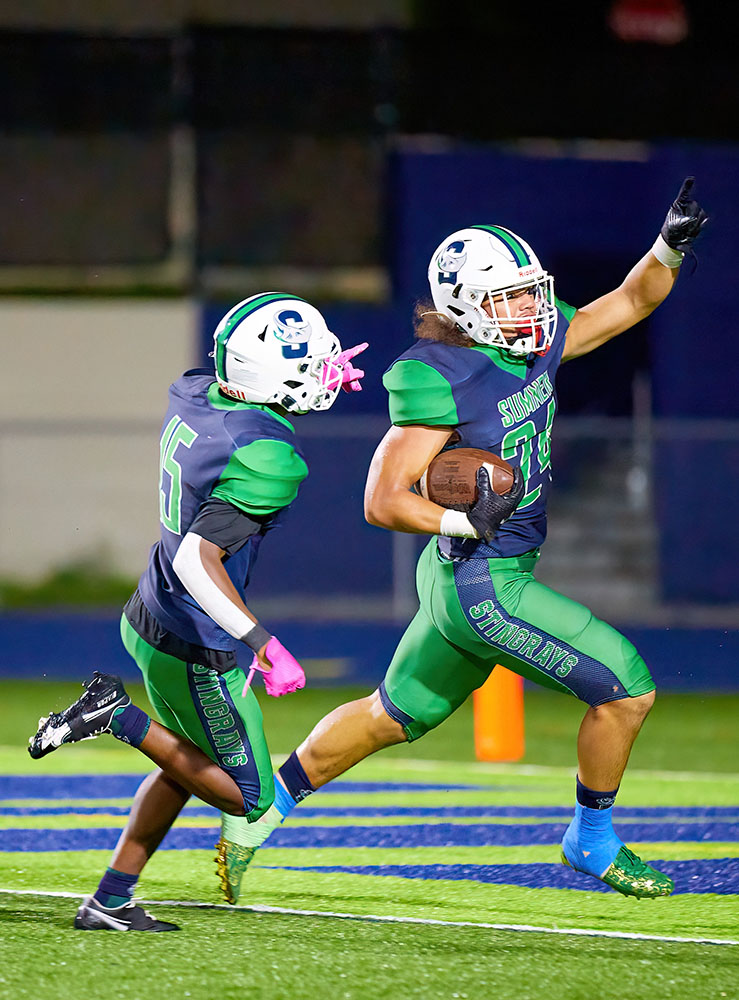 The Sumner HS band, flag court and the Stingray dance troop entertained the large Stingray crowd during the halftime. Brandon had little support, likely dampened by threatening rain early in the evening. A storm did pass over the stadium before the game but did little to rain on the enthusiasm of the Stingrays.
Sumner slowed the scoring pace in the second half with a TD in both the third and fourth quarters. Sumner senior Daniel Morales, who took over at QB for the second half, added a touchdown on a 26-yard run, and junior RB Zhonte Burney closed the scoring for the Stingrays with an eight-yard run.
Sumner finished with a record night of 75 points on the scoreboard. The offense accounted for 388 yards for the game with 308 of those yards courtesy of the running game and 80 yards in the passing column. The Stingray defense forced four turnovers and was led by #16 V. Lewis with four tackles.
It was an entertaining night for the Stingray faithful and a win that will be talked about long after the crowd dispersed into the night and the now 0-3 Brandon Eagles will be looking to forget. Sumner returns to action on Friday night, September 10, at 7:30 p.m., taking its 1-1 record on the road at Freedom High School for a non-district matchup with the Freedom Patriots. 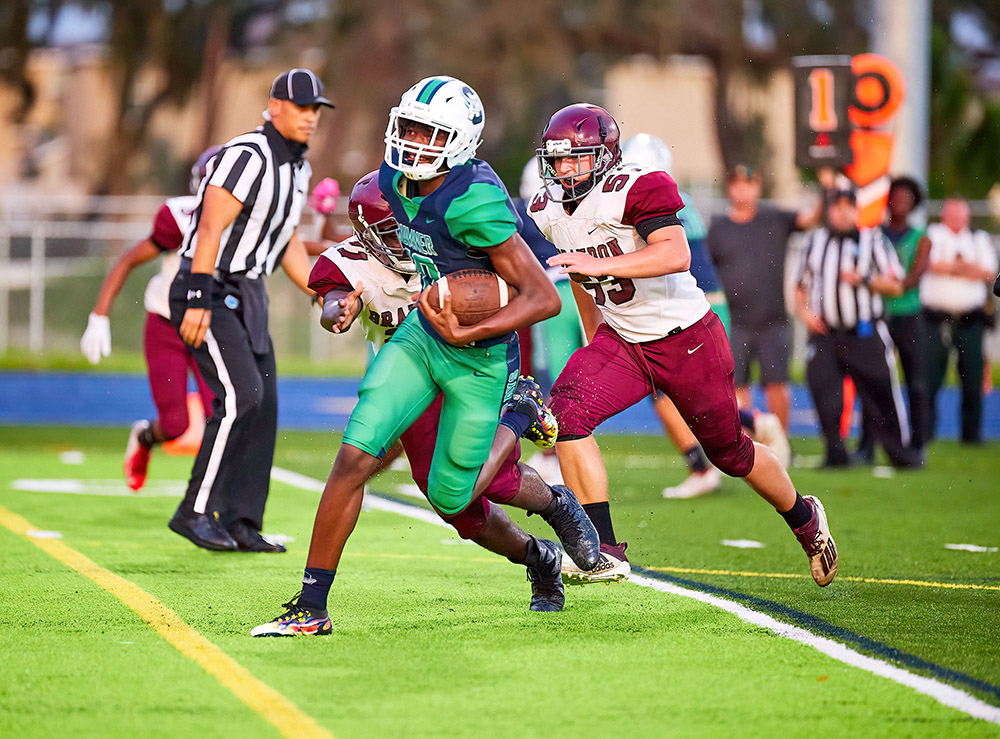 Francis Fedor Photos
Stingray sophomore QB Greg Smith eludes Brandon Eagles defenders on the way to the end zone for a Sumner touchdown in first quarter action as part of the 75-0 rout of Brandon HS.