In a world increasingly divisive over government affairs, there’s one thing Hillsborough County residents appear to be in agreement with — building new fire stations.
In an online survey open through Sept. 20, Hillsborough County officials seek the public’s input concerning the location of the proposed south Progress Village fire station, at 7402 South 78th Street in Riverview.
In total agreement, the nearly 200 respondents as of Sept. 5 said a fire station is sorely needed, long overdue and just a drop in the bucket for the emergency services needed to address the growing demands of south Hillsborough County’s breakneck growth.
“More than anything right now we need more stations and apparatuses on the road,” said one respondent, a self-described Hillsborough County Fire Rescue employee. “With the booming population our call volume is also booming, and response times are at risk.”
According to county records, Hillsborough County Fire Rescue responded to 64,551 calls for emergency fire rescue services countywide through the first half of 2021. That puts HCFR on pace to beat last year’s total by 12.6 percent. Of last year’s 114, 644 calls, 85 percent were for medical emergencies, and 15 percent were for fire-related emergencies. Those same percentages hold true for this year’s calls to date. 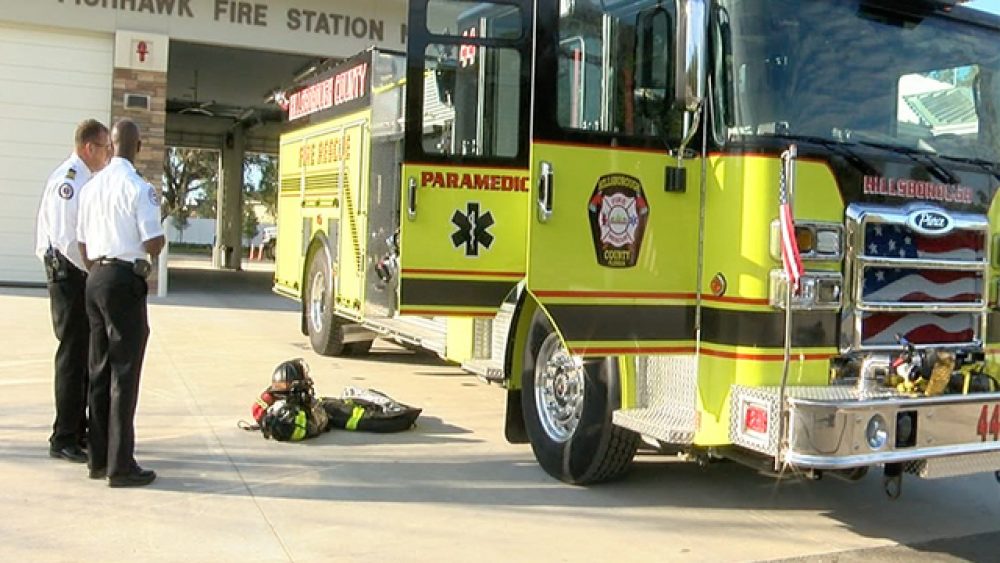 In a video accompanying the online survey for the fire station in south Progress Village, Hillsborough Fire Chief Dennis Jones said that the proposed 2.5 acre site “is well-situated between two existing stations and will provide good coverage and a decreased response time for this service area.”
The reported cost to acquire the site for Hillsborough County Fire Station No. 53 is $200,000. Fire impact fees would be used to make the purchase.
There’s a catch, though, and it’s a big one.
According to county officials, “station design and construction are currently underfunded,” which means it’s anyone’s guess how long it would take for a fire station to open that would answer calls for a service station in an area “somewhat constrained by I-75 on the east, Alafia River to the south and coastal areas to the west.”
Nearby fire stations include No. 1 in Progress Village (3 miles north, 3302 South 78th St.), No. 16 in Riverview (4.5 miles east, 9205 Kevin St.) and No. 12 in Gibsonton (4.3 miles south, 8612 Gibsonton Drive).
According to county officials, the updated strategic facilities master plan calls for 24 new fire stations over the next 20 years in Hillsborough, the state’s fourth-largest county, following Miami-Dade, Broward and Palm Beach.
Meanwhile, Hillsborough County Fire Rescue “is well-positioned to immediately commence with construction activities” on the south Progress Village fire station once “funding to construct new stations is secured.”
Survey respondents said there is no time to waste.
“This location will provide the communities of Riverview, north Gibsonton and Progress Village a reduction in response times for life-saving emergency responses,” said one survey respondent. “This is a great location.” 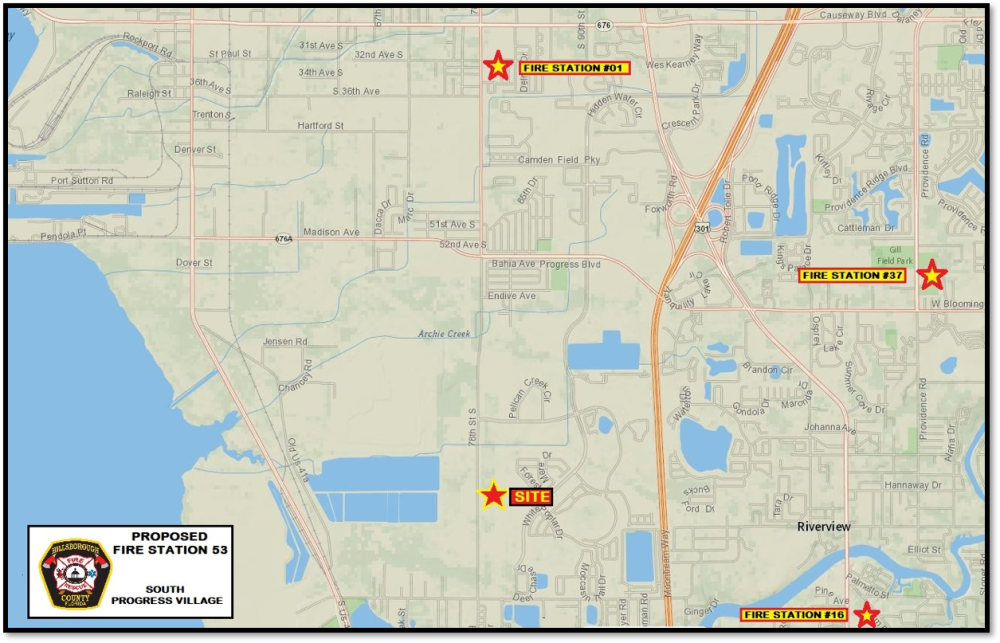 The proposed site for Hillsborough County Fire Station No. 53 to serve the south Progress Village area is at 7402 78th St., Riverview

Another respondent, a self-described fire rescue employee working on an Advanced Life Support (ALS) ambulance, offered a similar assessment.
“I can empathetically say that without a doubt we need more stations,” the respondent wrote. “Response times are only going to get longer without police and fire infrastructure to accommodate the above mentioned growth. Please approve this.”
Respondents noted that with breakneck growth comes heavy traffic, which, in turn, lengthens emergency response times.
“Are you comfortable with waiting 15 to 20 minutes, if not longer, for the next unit that is closest to respond?” one survey respondent asked. “Currently, if Station No. 1 is out, Station No. 12 has to go down Gibsonton Drive, up 41 around the river and back down Riverview Drive to get here. If Station No. 16 has to respond, they must navigate the curves of Riverview Drive, further slowing their response.”
Indeed, “this is an underserved area,” a respondent in agreement said. “They do not have nearly enough ambulances. It took one 30 minutes to arrive at my memaw’s house, and she nearly died. Please help.”
To review the site acquisition proposal and to add your comments, take the survey online through Sept. 20 at www.publicinput.com/hcengage/.