Fans continue to be excited by the opening weeks of football by the five South Shore high schools.
The action in last Friday night’s gridiron activity saw Riverview win

its third straight of this season, 14-0 over Middleton, after the Sharks suffered through a 1-8 campaign last year. While coach William Mosel’s Sharks were chewing up the Tigers at home, the East Bay Indians, under new head coach Mike Gottman, cruised to their second win of the season. The Indians had a successful visit to Dover where they disposed of Strawberry Crest 35-7. 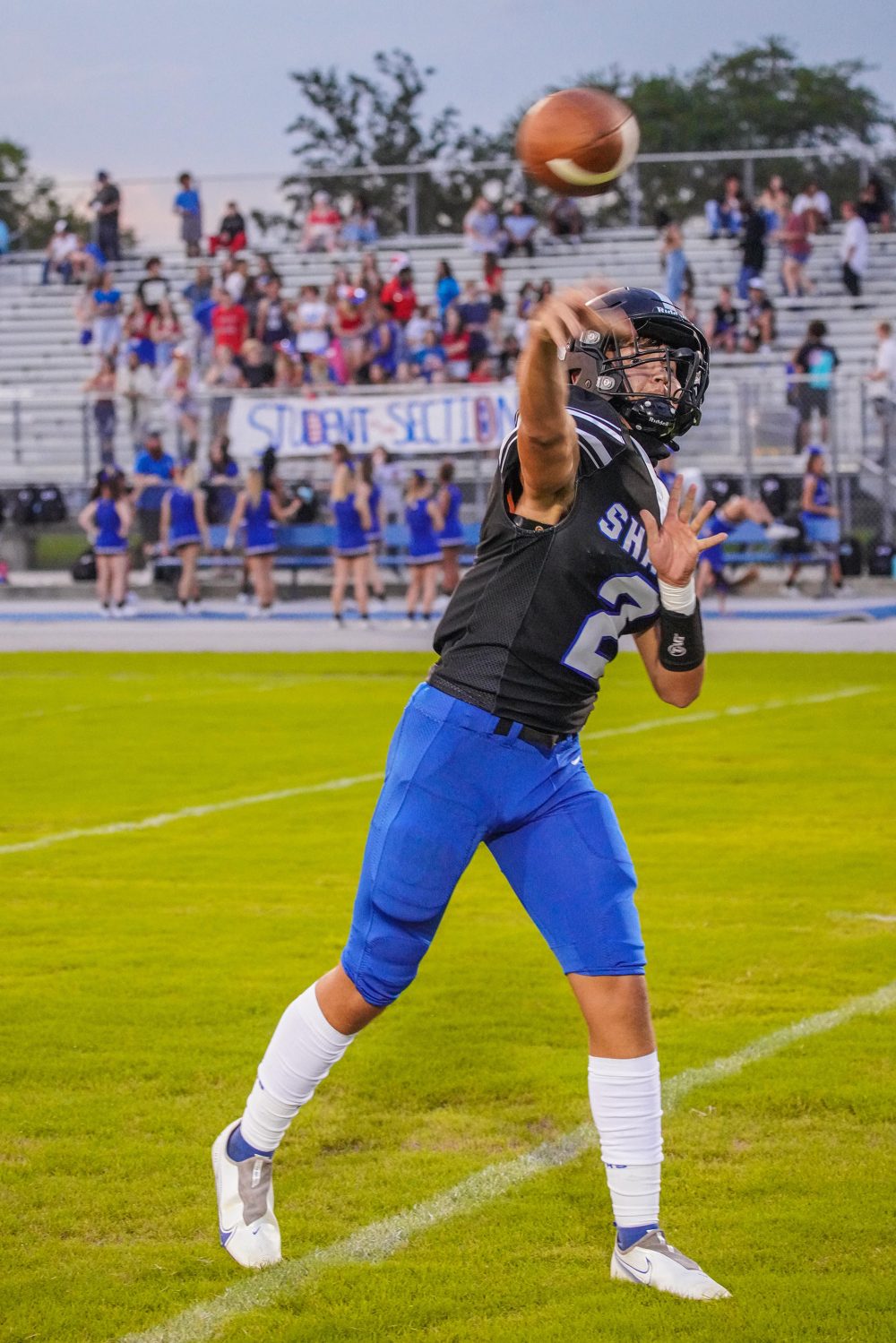 In other South Shore games, Lennard fell in its corral to the powerful Durant High Cougars 49-12. Spoto was shutout 38-0 by Alonso. The other South Shore squad, Sumner, routed Brandon High 75-0.
An early season prime time appointment is set for this Friday night, 7:30 p.m., Sept. 10, at East Bay High on Big Bend Road. The Indians have bounced back from an early humiliation from the Lakeland Dreadnaughts in an opening Kick-off Classic. East Bay beat Robinson and then Strawberry Crest. Now the red and white clad guys from Big Bend Road have a crucial home field match with undefeated and revamped neighbor Riverview.
Lennard, under veteran head coach Matt Kitchie, takes a 1-2 record to Tampa this Friday evening. The Longhorns continue a super-tough schedule, taking on the 1-0 Wharton Wildcats who walloped Freedom High 48-0 last Friday.
Spoto High, under Coach Alfred Smith, welcomes Strawberry Crest to the Spartans stadium Sept. 10 in a bid for Spoto’s first win.
Sumner High plays at Tampa under the Friday night lights, heavily favored over the Freedom High Patriots.
Last week Riverview used its rushing attack to top Middleton. Dontarius Shoals carried the pigskin 14 times for 157 yards and a fourth-quarter score. Harrison Hensly had four rushes for 87 yards and a first-quarter TD. David Apaza hit both PAT kicks. The Sharks outstanding transfer, QB Colin Larsen, passed nine of 18 for 92 yards.
In a warm-up for Riverview, East Bay utilized its rough and ready defense to top Strawberry Crest 35-7. The Indians Jaelin Sneed took in the first score after the stout EB defense set it up with a three and out. Nick Linenberger kicked the PAT, and the rout was on 7-0. EB’s outstanding quarter back, junior Nick Carter, scampered for a TD following a defensive highlight from Christian Stewart with an interception. Another EB three and out set up a another Sneed short run into the end zone in the second quarter. Sneed scored his third TD of the game on a 13-yard in the third quarter. After EB’s Anthony WilIams’ fourth quarter interception, running back Sneed capped off his big night with a fourth score to end it at 35-7. According to Coach Gottman, “We did good at what we want to do: control the ball, score on offense and play lights out on defense.” The Indians offense piled up 356 yards rushing, 18 passing on a lone completion to Vincent Ketchup. EB held Strawberry Crest to 128 total offense. EB’s Deven Carney racked up nine tackles and a sack. Now, the Indians hope to duplicate most of that at home this week versus Riverview. 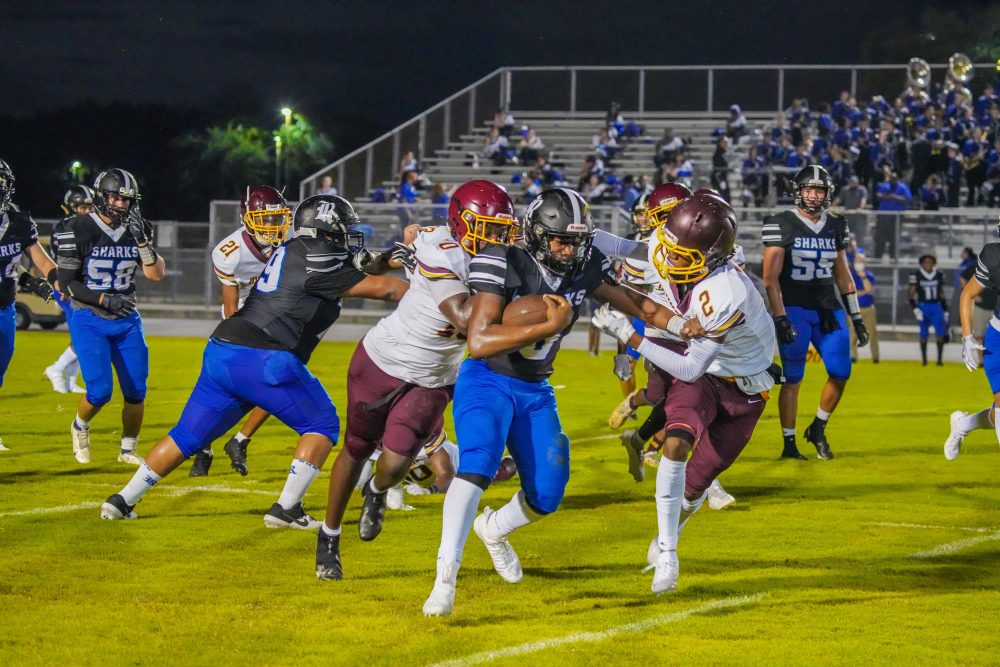 The Lennard Longhorns, 1-2, are working during this week’s practice to upset another tough opponent, Wharton, in Tampa. The Horns got off to a good start against Durant. But Durant showed its muscle and easily won after Lennard quarterback Gavin Henley was forced out of the game due to a throwing arm injury in the second quarter.
Lennard received the opening kickoff and immediately moved it down to the goal line with a 47-yard toss by senior QB Henley to fellow senior Ha’keem Monroe. The Horns could not score, however. Lennard was unable to punch the ball in and failed on a fake field goal attempt from the Cougars six-yard line.
After a couple of first downs, Durant needed to punt, and the Horns took over again. This time Lennard moved the ball down the field with a series of pass completions and chunk yardage runs from senior RB Chauncey Jones. The impressive drive ended with a six-yard TD reception from Henley to Monroe for a 6-0 Horns’ lead. The extra point attempt was blocked. Durant woke up and got on track with a long sustained drive, all on the ground, part of its 315 rushing yards of the night. Durant finished up its drive with a one-yard TD rush. The Cougars took the lead for good, 7-6, on the extra point.
Two consecutive false starts stranded Henley and the Horns deep inside their own territory when an all-out blitz led to an intentional grounding sack. Durant added a safety and took a 9-6 lead. Durant struck for another score, once again on the ground, with a 25-yard TD scamper up the middle to go up 15-6. 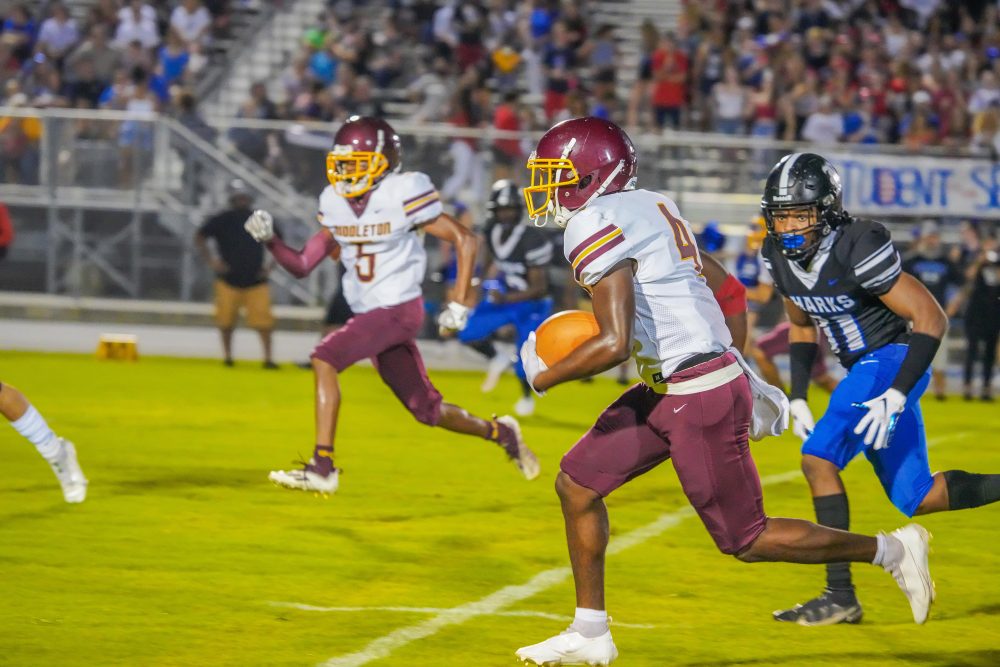 Riverview wins its third straight of this season, 14-0, over Middleton.

With the Horns starting QB Henley out due to his injury sustained during the second drive, junior tight end and backup QB, Tyler Russell, checked in. Unable to get a first down, Lennard had to punt. Smelling blood, Durant went for the jugular and completed its first pass of the evening to put the Cougars in scoring position. Durant scored to make it 22-6.
The Cougar domination continued, until backup QB Russell scored on an eight-yard keeper late in the third, making the score 35-12 Durant. The Cougars would end up scoring two more TDs for a final score of 49-12.
Lennard’s Henley sustained a sprained wrist and is hopeful to play against Wharton.