NEVER, ever give out personal information over the phone

My 89-year-old mother had a rough week recently when she received a call from a scammer posing as a representative of the bank she’s been with since 1977. She was on the other line with my sister at the time and called the number back as soon as she got off the phone.
The scammer had “spoofed” the call, which showed her bank’s name on her caller ID. She had never received a call from the bank before, so she immediately suspected there might be a problem with her account.
According to the Federal Communications Commission, “spoofing is when a caller deliberately falsifies the information transmitted to your caller ID display to disguise their identity.”
These spoofed calls can look like they’re coming from a local number or from a business or government agency you already have a relationship with and trust. If you answer them, the scammers use carefully crafted scripts designed to convince you the call is legitimate.
Actually, these people are highly skilled, professional con artists, and their goal is to get you to turn over your personal information to use it for stealing your money or committing other forms of fraud.
When my mother returned the call, the woman who answered gave her bank’s name. Mom told her she needed to make sure her checking account was okay, and the woman promptly asked for her account number and said she would look it up.
After several minutes, this “bank representative” came back on the phone and told my mother no one from the bank had called, and her account was fine. 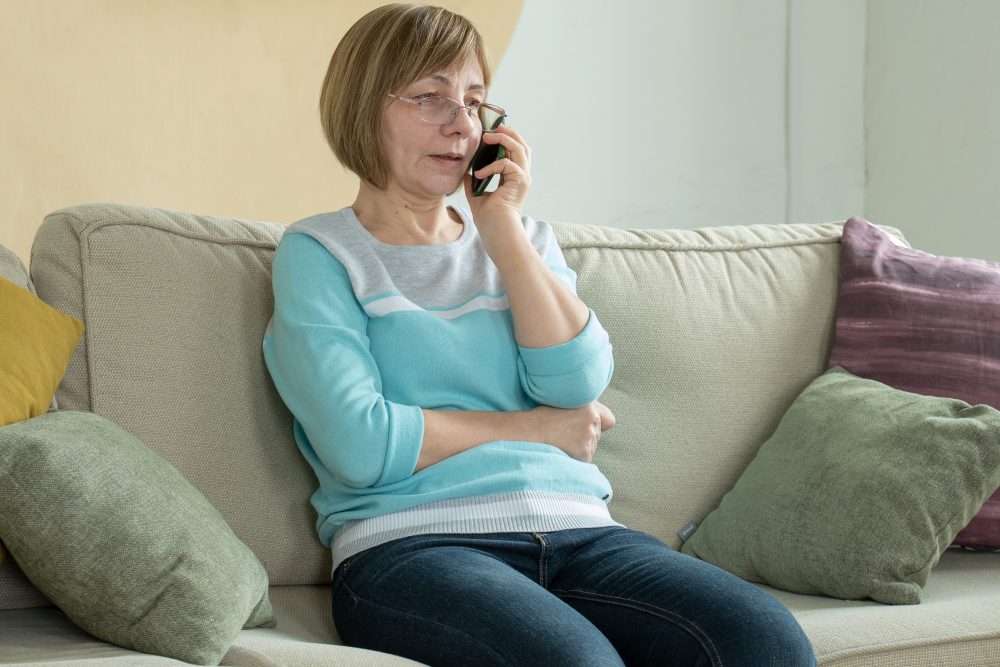 STOCK SERVICE PHOTO
Millions of people each year are scammed over the phone by criminals representing themselves as legitimate representatives of companies their victims have relationships with and trust. Don’t ever give out any personal information unless you initiate the contact.

Mom was quite relieved. That is, until she mentioned the incident to me that same afternoon. I told her it sounded like a scam, and the money in her account could very well be at risk.
Of course, she was horrified. She couldn’t understand how anyone could or would do such a thing.
So immediately the next morning, she went to her bank, reported the incident and opened a new account. That meant the seven companies or agencies auto-drafting her payments had to be contacted with the new information.
Since each had its own procedure for doing this, including a couple requiring the information be submitted online, I needed to get involved. My mother was so upset she had fallen for this scam that all she wanted to do was explain how real it seemed.
And since she’s a technophobe who disdains all things computer, I knew it would be difficult, if not impossible, for her to get these auto-drafts changed over in a timely manner. I offered to help and, even then, it took the better part of a day to get this done.
And since I’m Mom’s power of attorney, we had to return to the bank together so that I could sign the required paperwork in her presence.
Throughout this ordeal, I could see the anguish and embarrassment my mother felt. She genuinely thought she was dealing with someone representing her bank.
I told her that even if her phone said God was calling, she should never give out her personal information. After all, I reminded her, He already knows it and would never be asking the question in the first place. So does your bank, doctor’s office or the Social Security Administration.
Like so many others of her generation, my mother is completely trusting. It never dawned on her people could be so devious. After this experience, however, she feels she can’t trust anyone.
I hate to say it, but that’s probably a good thing.
At least, in her case, we recognized the scam before any money was taken. Unfortunately, there are criminals out there who lie awake nights dreaming up ways to defraud people. These creeps ruin millions of lives each year. In 2020 alone, the FTC received 2.2 million reports of fraud involving losses of $3.3 billion.
There’s a scam for just about everything these days. Here are just a handful of some of them: the grandparent scam; romance scam; Amazon gift card scam; lottery, sweepstakes and competition scam; banking, credit card and online account scam; computer hacking scam; employment scam; and debt relief and foreclosure scam. Believe me, there are many more.
Here’s the thing, people. The only way to protect yourself from being duped by these sleazeballs is to NEVER give out any personal information, including your account numbers or Social Security number, your mother’s maiden name, passwords or any other identifying information in response to unexpected calls, letters or emails seeming at all suspicious or too good to be true. Better yet, don’t respond to any of these forms of contact, unless you initiated it in the first place.
Please pass this information on to your family and friends. The elderly may be particularly vulnerable, but they are by no means the only ones who become victimized by these highly sophisticated crimes. Not everyone reads my column or attends our local law enforcement briefings, but everyone needs to know they’re potential targets.
If you feel you have been victimized by any kind of scam or fraud, call your local law enforcement agency to report it.
Lois Kindle is a freelance writer, photographer and columnist for The Observer News. She can be reached at lekindle@aol.com.

U Call – We Haul will take away your junk, unwanted items