“It’s just heavy,” Davis said, in a post-meeting interview. “The last 18 months have been super hard as a practitioner and super hard as a leader. But I come to work every day with the same enthusiasm, the same efforts, the same intentionality to really help Hillsborough County and for us to get into the healing state.” 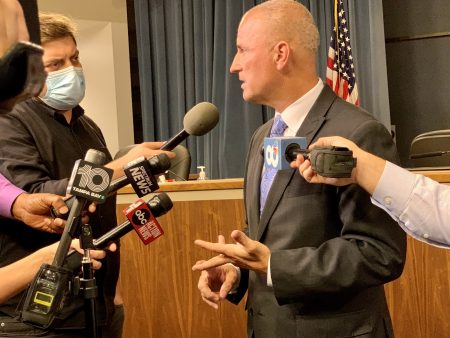 As infections grow and tensions rise, schools continue to stand in the crosshairs of a community divided over protocols proposed and in place to battle the unrelenting march of the coronavirus Delta variant.

“It’s just heavy,” Davis said, in a post-meeting interview. “The last 18 months have been super hard as a practitioner and super hard as a leader. But I come to work every day with the same enthusiasm, the same efforts, the same intentionality to really help Hillsborough County and for us to get into the healing state.”

That road is rocky as best, given that even with detailed presentations by top Hillsborough County medical representatives, and their clear support of vaccination, social distancing and face coverings, the debate over mask mandates continued to reach a fervent pitch at the Aug. 18 meeting, where more than 80 speakers signed up to speak on both sides of the issue.

“Where we think that we’re making strides, there seems to be a setback along the way,” Davis said in his post-meeting interview. “It’s like playing Whack-a-Mole. So how do we get to a point where we have consistency and control of what’s going on? We continue to see curve balls thrown at us, and we need to adjust.”

The issue transcends the local boardroom.

As of Monday morning, seven Florida school districts had adopted a more stringent mask policy than Florida Gov. Ron DeSantis warned against in an executive order he signed earlier this month. With threats to hold back state funding for superintendent and school board member salaries, the debate over local control of public schools continued to intensify.

When asked if this portends the beginning of the end for public education, Davis took the high road, noting the “robust experiences” offered by public schools, as he acknowl-edged the increasing politicization of schoolhouse matters.

“What happens outside from a legislative standpoint, our constituents just have to pay attention,” Davis said, in his post-meeting interview. “They have to have a full-course press to show the value of district-managed public education.”

According to school board chair Lynn Gray, a workshop meeting on the issue is forthcoming.

Davis said that while he stands as “an advocate for choice, “my role and responsibility is to protect Hillsborough County public schools that I and the school board run, govern and assist every day.”

In that regard, troubling issues persist as the virus continues its relentless move forward.

According to the Hillsborough County school district’s online COVID-19 dashboard, there were 8,771 confirmed cases from March 2020 through Aug. 1. As of Monday morning, there were 3,119 confirmed cases this school year, with students representing 77.7 percent of the total. In all, 11,675 students and staff members were required to isolate or quarantine as a result.

As for where he stood on the updated mask mandate, Davis at the Aug. 18 meeting recommended against a stricter mask mandate while saying he nevertheless would support and enforce the board’s will.

“Openly, there’s a law, and for me and my particular core values, I just can’t break it,” Davis said. “Not that I don’t care where we are as a current community related to COVID.”

According to Hillsborough County school officials, parents for roughly 15 percent of enrolled students had signed paperwork to opt their children out of mask mandates prior to the Aug. 18 meeting.

“The majority of our parents are willing and understand where we are as a community, and I respect that and support them,” Davis said. “And I also respect the 15 percent who elect not to wear a mask. That’s their constitutional right.”